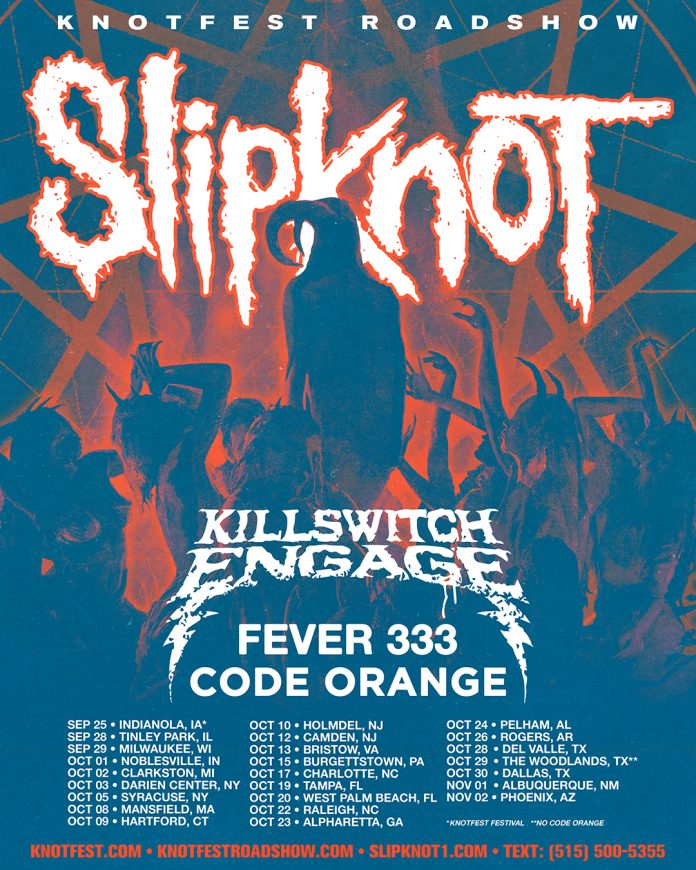 5:19PM Slouching next to my Jeep’s hissing engine in the fleeting 4×4 square of shade cast down upon the gravel drive of the Ruoff Home Mortgage Center, I decide to hoist myself up amongst the thickening cloud of October parking lot dust to search for my friend Nick, who is B-lining toward my dropped pin. Nick, the humble yet unmistakably talented vocalist and guitarist for Stonecutters – a full-assault metal act out of Louisville, KY – has decided to drive down to Indianapolis from Fort Wayne to catch Slipknot for the very first time. Much like myself, Nick is somewhat of a newfound fan of the band so this should be an ‘experience’ for us both. I crack my first beer – a Chaos Monger Double IPA – and take a sip. And right on cue Nick appears from the horizon like the Aboriginal Tribesman in Wayne’s World 2. We shake hands. He cracks a beverage. “It’s good to see you, my friend.” Yes, it is indeed.

5:46PM <crowd cheers> Code Orange has already begun to play. In fact, they’ve been playing. I hear the crowd cheering so they must be good. We’re still standing in the parking lot talking about Brooks & Dunn. We should go in, right?

5:53PM We open our second beverages. We should really head in. Yeah – definitely. So I lock up and we head towards the security gate gulping the last of our sanely priced beers. Regardless, I’d rather be gulping an insanely priced beverage at a Slipknot concert than anything else, but I digress.

6:15PM We’re in and have found our seats. We missed Code Orange. It’s unfortunate, but it happens. From a distance, they sounded like they rocked. The crowd seemed pleased with their performance as we entered the pavilion. I’ve listened to them on Spotify and I plan to listen more. Let’s just assume they kicked ass and move on from this part of the review…

6:46PM Fever 333 is playing. I didn’t know what to think at first, but they’ve found their groove and I find myself white-boy-boppin’ in my seat. They have a grand sound. One meant for stadiums. I lean over to Nick and we discuss the complexity of a band’s sound and how that translates differently to each and every venue. This sound is good for this venue. Large grooves with slick drum fills and amplified De La Rocha-like vocals, Fever 333 was meant for large open-air amphitheaters and festival settings. Originally formed in Inglewood, CA – and I’m sure this isn’t the first time this has ever been stated about the band – I’m hearing heavy Rage Against the Machine influences blended with a more progressive and modern metal sound. Think “Battle For Los Angeles” RATM and an extension of that into 2021. The song “Hunting Season” perfectly exemplifies their blend of multiple genres of music – namely hip hop, hardcore, and punk. Politically leaning and activist-infused lyrics combined with Jason Aalon Butler’s sky-cracking vocals sometimes stir up fond memories of the band Earth Crisis. In 1996, I played the HELL out of their album “Gomorrah’s Season Ends” so this is a good thing. I will definitely check out more of this band. You can catch them on the Knotfest through the beginning of November.

7:50PM Killswitch Engage eased in with “Unleashed” before opening up the throttle on “Hate By Design” and “The Crownless King.” Circling back to the translation of a band’s sound to a venue, Ruoff is the perfect venue for Killswitch. It’s a rare achievement when a band sounds as good at the furthest reaches of the venue as it does down in the pit. The band accomplishes this by not overcomplicating the song compositions and allowing each instrument to fill its own spacewithout compromising or stepping over the others. I literally do not know how Jesse Leach can transition between such angelic and asphalt-busting vocals, but this guy is top tier. The band is top tier. I’ve seen them open for several legendary metal acts such as Anthrax and others. More to come.

8:55PM Nick and I have migrated to the concessions in search of food and water like two dehydrated goons stranded on Slipknot Island. Holy Crap! This taco is definitely for drunkards. AND Killswitch Engage KILLED IT. They ended with Dio’s “Holy Diver” and, like a tourist, I definitely recorded the majority of it on my phone. (Don’t worry – I don’t watch the show through my screen, but you definitely don’t want to watch my copy of the video). They also played one of my personal favorites in “My Curse” which I first heard while playing Guitar Hero 3. I plunge the remainder of my taco down my throat and guzzle my water. Time to head to the pit for Slipknot.

9:10PM I’ve broken away from Nick and managed to slither my way through to the center of the pit. Everybody is reeling with anticipation – including me. What will they play first?!

9:30PM Slipknot came swinging out of the gate with my personal fav “Unsainted.” Corey Taylor belting, “I’m setting you FREE!” is already a high point. It’s as if he was giving us all permission to set ourselves free for the rest of the concert so I moshed even harder during “Disasterpiece” while reciting yetanother favorite lyric from the song, “I’m not supposed to be here! I’m not supposed to be!” The pit here isn’t bad. Everyone is friendly and positive. Though it’s not the most savage of mosh pits, I am getting older and thinking of Danny Glover’s character, Roger Murtaugh, in Lethal Weapon. “I’m getting too old for this…”

WhatTimeIsItPM? I don’t know what time it is. I haven’t been looking at my phone. It has to be around 10PM. They played “The Heretic Anthem” and “Psychosocial” which are both band classics and personal Top 5’s. The production quality of this show is absolutely top notch. Alessandro Ventrella’s flamethrower bass guitar is WILD. I’ve made my way back to my seat and even Nick has been taking video of the flaming bass. As I take a moment to digest the visuals from this perspective, I feel like I’m at the MTV VMA’s. The stage is shrouded in spark-filled video screens with keg drums and drummers on raised platforms looming ominously over the crowd on either side. Sporadic fire plumes blast and billow and forage out into the night. Everyone seems to know every word to every song. You can hear every note and sound made by every instrument and knob played by every individual band member. I tilt back the remaining contents of my beverage and look around. Everyone is so damn happy. I think of my mom and how she thinks heavy metal is ‘evil.’ How could something so ‘evil’ put a smile on this many faces? I smirk to myself.

10:34PM OK. This just might be one of the best setlists of all time and I’ve been to hundreds of shows. I’ve returned to the pit and am kneeling on the floor with the rest of the mosh pit. They just finished playing “Duality” and that’s the cherry on the pie for me. Anything from here is just ice cream and sprinkles mixed with a heavy dose of moshing.

10:53PM I’m sitting in my Jeep. Nick and I have parted ways for the night since we both have fairly long drives ahead of us. For the encore, they played “People = Shit” (*another personal anthem), “(sic),” and “Surfacing” with my opting out of the pit for the latter two songs. I like to have a quick exit strategy at the end of all live shows, but moshing to “People = Shit” was a bucket list item that had to be checked off. I’m sad I missed Code Orange, but after having put many a thing on hold during the pandemic, I’ll always take catching up with friends above all else.

Overall, I give this show a 10/10. Though I wish I could have photographed it, sometimes it’s best to attend shows in less of an official capacity. Every band played like they deserved to be the headliner. I couldn’t have asked for better company or better weather or a better lineup or setlists or a better way to kick off October as I did with Slipknot and friends.

The Knotfest Tour will continue with numerous dates throughout October and will conclude on November 5th in Los Angeles at the Banc of California Stadium.