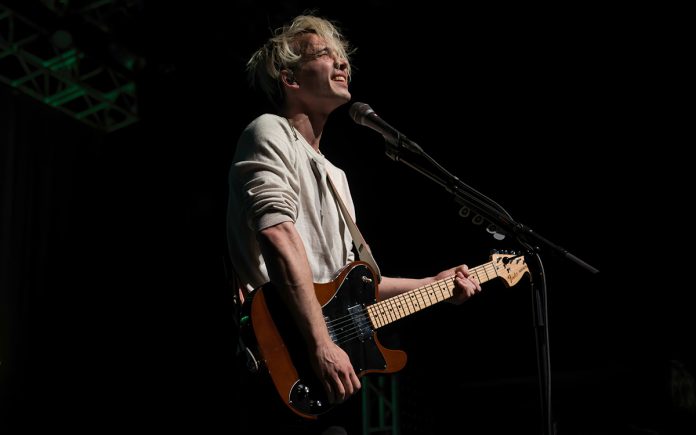 Grand Rapids, MI –  Badflower, Dead Poet Society, and Teenage Wrist took the stage at GSC Live at 20 Monroe in Grand Rapids, Michigan on October 1, 2021. This high energy  night began with a seven song set from Dead Poet Society. Members Jack Underkofler (vocalist, guitarist), Will Goodroad (drums), Dylan Brenner (bassist), Jack Collins (guitarist) have an impressive background as they met and formed while attending Berklee college of Music and Wentworth Institute of Technology in Boston. Now graduated, this band is a powerful force in rock music. Perfection! They have it all!  Teenage Wrist members Marshall Gallagher (guitarist) and Kamtin Mohager (bassist/vocalist) Anthony Salazar (drumming) filled the space between Dead Poet Society and Badflower with their alternative rock sound and dreams of bringing back the mosh pit.

Completely in touch with post pandemic emotions and frustrations, Badflower made fans feel alive with fanatical rock riffs, beats and pauses.  So This Is How The World Ends Tour is composed of talented storyteller and lyracyst Josh Katz (vocalist/guitarist), Joey Morrow (lead guitarist), Alex Espiritu (bassist), and Anthony Sonetti (drums).  Fans showed their devotion by singing along to songs from their new album that was released just five days prior! Josh Katz has a talent for creating a room of shared experience, connecting with and engaging the audience.  Josh asked who was there from the Detroit performance the night before, the front row was filled.  I would buy a ticket to see them again tomorrow. I can’t get enough of this band.  Alex Espiritu’s blinding positive energy and charisma would fuel the growth of any flower, he is a talented performer! Chants of one more song, one more song, one more song got Badflower to come back out on stage after an impressive 16 song set. Badflower obliged as Josh pushed through his battle with laryngitis (which he mentioned but was not noticed at all through his range and fantastic rock screams). The seamless transition from stand on the seat hard rock to the heart warming acoustic guitar tones of My Funeral closed the evening. The band will have 23 more U.S performances and then 20 stops in Europe starting in February. For anyone reading here, take the time to wipe the condensation off the walls of the terrarium housing Badflower and see the warm beating heart inside, you might miss it if you don’t pay attention.  You will be glad you did.