Rural Wisconsin, April 1986 – Graduation was approaching. About 30 rowdy seniors were gathering in a wooded area, pop tops in hand, doing what kids did in 1986 (the drinking age had been raised to 19 in 1984) in the months leading to graduation. Sounds from a mix tape were blaring from a 20 pound ‘compact’ Akai boombox while the seniors sang along and huddled around the campfire. Life was good.

Suddenly, from the surrounding underbrush, what seemed like a dozen flashlights illuminated the night. Shouts of, “COPS!!!” pierced the night air as those in attendance scrambled to ‘get out of Dodge’ and forgo the impending wrath of parents having to pick their children up from the county jail, avoiding getting busted for underage drinking. As the deputies surveyed the can laden scene, with no one in custody, they heard the words, “I drink alone” coming from battery powered speakers…

Vienna, VA, 35 years later – several thousand people, many of whom remember nights such as that night in rural Wisconsin, gathered in the secluded Wolf Trap National Park in Vienna, VA. George Thorogood and the Destroyers were taking the stage at the Filene Center on a balmy August night.

The lights went down and the Barry McGuire hit, “Eve of Destruction” penetrated the hot and humid August air. This could only mean one thing, the Destroyers, with George Thorogood (guitar and vocals) and the band, consisting of Buddy Leach (sax), Jeff Simon (drums), Bill Blough (bass), and Jim Suhler (guitar), were ready to wreak havoc on the waiting fans.

They opened with a very fitting song, “Rock Party” from their 2006 album The Hard Stuff. It did not take long before the young and young at heart (myself included) were standing and dancing in the heat. The party had indeed begun. Everyone was feeling all right for the impending party this night (and now we were all of legal drinking age).

No show would be complete without “Who Do You Love?”. Two songs in – the sing alongs had started and the seat dancing was getting ruckus (or is it rock us?). At the conclusion of the song, George, to the relief of many in attendance, announced that he had spoken to a few probation officers and was assured that this show was off limits. As the crowd laughed and clapped with approval, an impish smile came to George’s face. Reliving the dream baby, reliving the dream!

After “Night Time” (followed by George, “to be with you… and your girlfriend too… yeah, I know, I am so full of shit”), the band went into “I Drink Alone“, again, to the cheers and applause of the standing crowd.

As George prepared to do a little “House Rent Blues” his hair had to be adjusted. In a very Elvesque manner, George turned his back to the audience (facing the drummer), slicked back his hair and did a little blues before going into “One Bourbon, One Scotch, One Beer“, which was also a high school theme song in 1986… well, except it was more about the Budweiser beer than it was about bourbon and scotch. He did deliver a good PSA, with another boyish smile, “Don’t drink and drive! (laughs and cheer), get your girlfriend to drive (louder)… or get your buddy to drive (a little louder)… or better yet, your buddy’s girlfriend (roar)”. I was loving the 80s humor!

The show wound down and George reminisced about being bad, and saying in this day and age we have a different bad… “bad breath… bad habits… etc” This led to the his next standing ovation with “Move It On Over“. At the conclusion of this hit, he wiped his brow and handed the sweaty hanky to a standing fan… who tentatively took it (I think she was looking for a stick). The light hearted banter that went on between George and the fan was awesome and worth the price of admission!

George finished the show with “Bad to the Bone“. By this time there was not an occupied seat in the house as all in attendance were standing and moving to the music. With one last, “Thank you and Good Night!” George waved and left the stage. 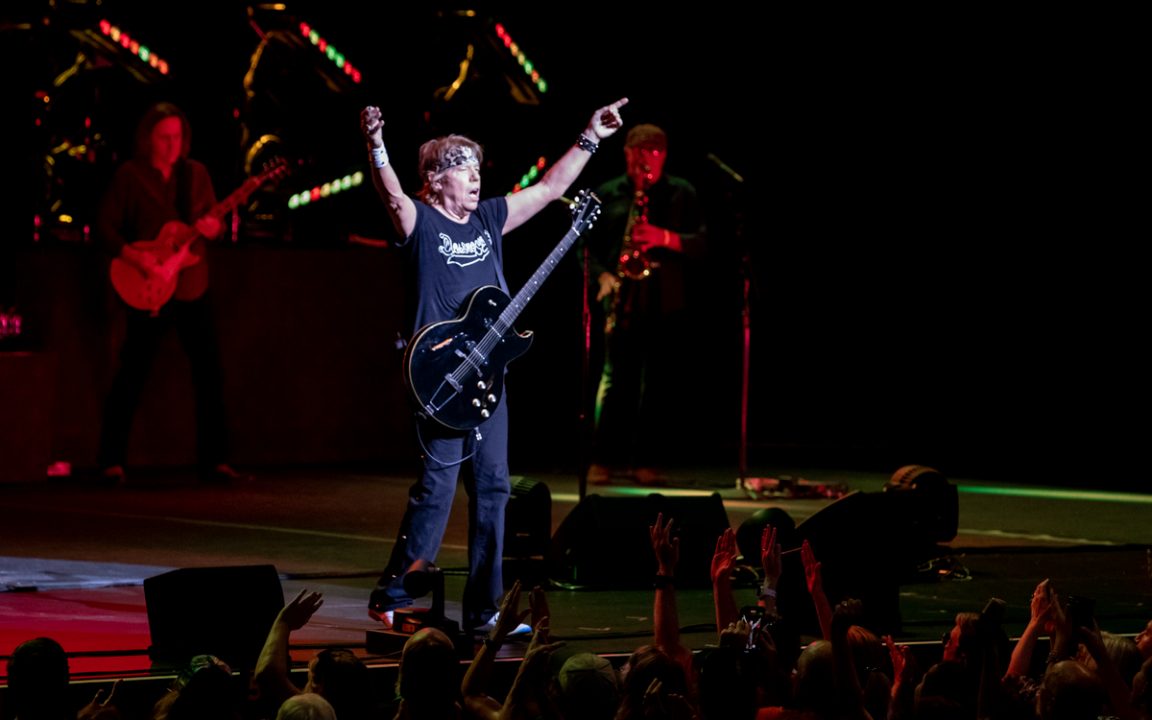 Thankfully, history did not repeat itself this night. When the music had stopped the lights came back on. Those listening to the music and sharing in the beer were still in the area, no shouts of “COPS!” piercing from the night air, no teens tripping over each other. They say you are only as old as you feel when you go to a concert. On this night, myself and many others were 18 once again.

Want to see more? Check out Madison Blues from 1984!

Rock Party
Who Do You Love?
Shot Down
Night Time
I Drink Alone
House Rent Blues
One Bourbon One Scotch One Beer
Gear Jammer
Move It on Over
Bad to the Bone