Richmond, VA – The sun had set over the lazy east coast city of Richmond, VA. City slickers and country folk alike had gathered in abundance (nearly sold out) at the local watering hole known as The National Theater on October 27, 2021 to see if the rumors were true… a new sheriff was coming to town.

The Ruen Brothers (Henry and Rupert Stansall), the renegade rockabilly act from England, had whipped the crowd into a frenzy. With a mix of upbeat originals, and a few fun, but oh so corny, jokes, the brothers worked the crowd to perfection. As they left the stage it was time to introduce the new sheriff, Peck, Orville Peck.

Breaking all traditions, Orville did not ride onto the stage mounted upon a towering steed, nor was he wielding a sheriff’s weapon of choice. No, he simply walked out on stage with his guitar securely strapped to his shoulder.

He opened with “Big Sky” from his 2019 album, Pony to the pleasure of the packed crowd. I think it is safe to say Orville’s hypnotic vocals gave all a feeling of big sky, falling in love. He rounded out the first three with “Winds Change” and “Roses are Falling“, also off the Pony album.

The next 3 songs were “Turn to Hate“, “No Glory in the West“, and “Drive Me Crazy“. Drive me Crazy was fun because we learned it was about truckers in love and that Orville was not a one horse (or guitar) show. He played piano quite well. Adding to the fun, he was joined by Duncan Jennings taking part in a piano top serenade.

By this time, the audience was tightly packed, trying to get a view close to the stage. It was refreshing to see so many drawn to the serene vocals of sheriff Orville. It seemed like every time he spoke, the audience cheered. This was way too much fun! 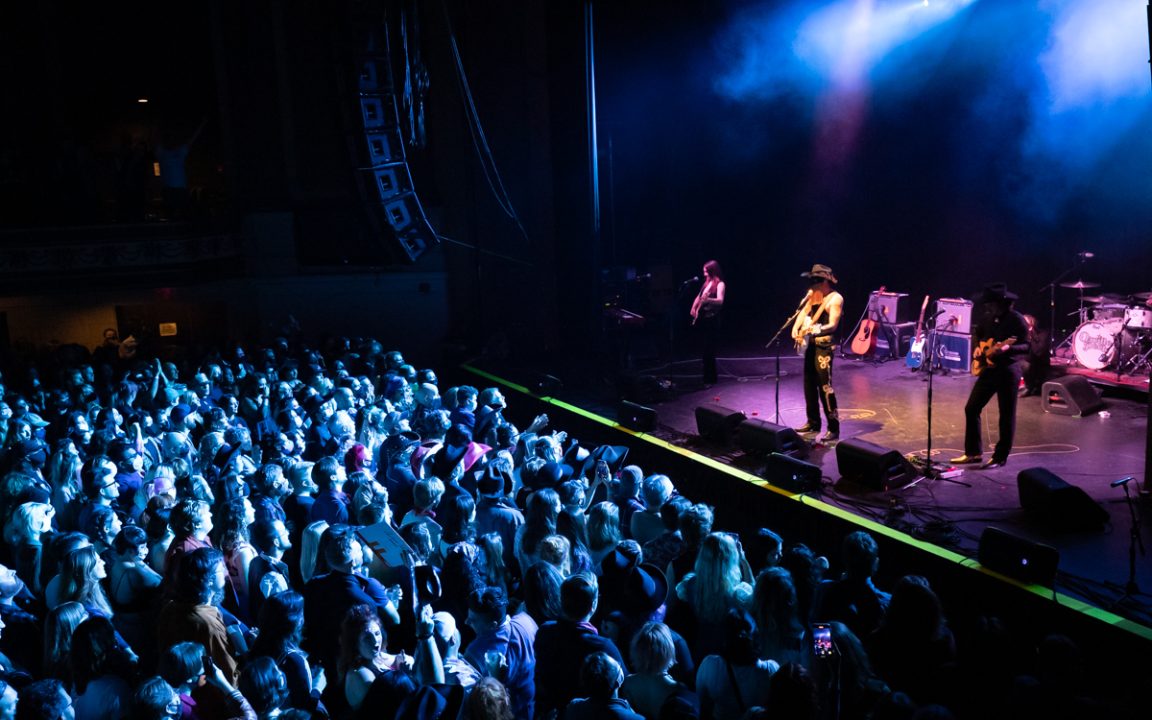 After, “Summertime“, from Show Pony, we were introduced to a new song, “Any Turn” which has yet to be released. Orville informing us that we were the third to hear this new song enjoyed sharing this new song. “Queen of the Rodeo” is a song about drag queens, which Orville touted as one of the last remaining subversive art forms.

After a few more songs, including a cover of, “Unchained Melody” (he fondly calls he and Paul Cauthem the Unrighteous Brothers) he and Bria Salmena sang a duet of “Legends Never Die” (see video below). Up until this point there was a lot of great interaction with his deputies (band) and this was no exception. From here on out, Bria and Orville played off each other, gaining energy as the show neared the end, which wound up the audience.

As the the stage sun was setting, they finished off with “Dead of Night” and a very fast paced “Take You Back (the Iron Hoof Cattle Call)“. With the Cattle Call, he told the audience he did not like audience participation songs, but he would make an exception. Asking the audience whether they could whistle he was looking for some backup whistlers. While I will say the audience was not the most adept at whistling in tune, Orville certainly could. With that, he bid us goodnight and tried to ride off into the sunset. The audience was not ready to let him go quite yet, erupting into a foot stomping standing ovation, begging Orville to stay for one more song! He obliged!

When he came back out to perform his encore, he talked about a very special cover, “Born This Way“, which Lady Gaga had asked him to cover for her. Take a listen, it is the perfect song for all of us. It was a great ending to a great show.

He rode out, just as he rode in… on foot, guitar on his shoulder. While he had no Silver to mount, his performance for the night was pure gold. Looking forward to the return of the sheriff.

Want to see more Orville Peck? Check out this video.