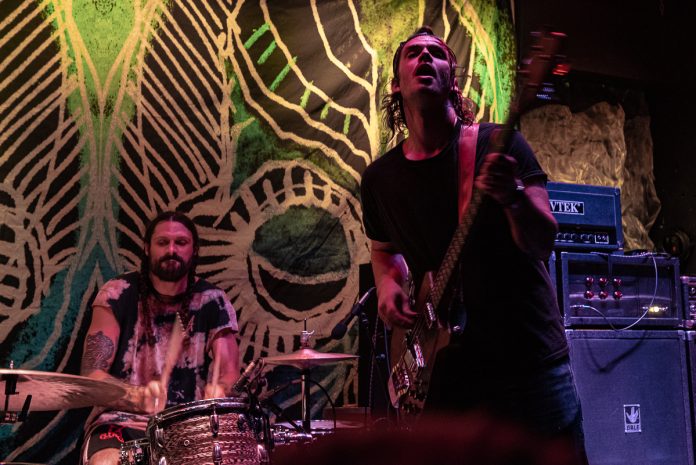 ORLANDO — A band’s walk-on-stage song carries just as much significance as, say, a baseball player’s saunter from the dugout or a wrestler’s triumphant entry. So it’s no accident that All Them Witches prepared the crowd for their pending sonic assault with Black Sabbath’s classic “War Pigs.”

The Nashville quartet are decades removed from stoner metal’s grandfathers, but the Prince of Darkness would easily recognize his DNA in the band’s impossibly thick bass lines, bare bones drums and piercing riffs.

Touring in support of 2020’s Nothing as the Ideal, All Them Witches kicked off their set with opening track “Saturnine & Iron Jaw”. Guitarist Ben McCleod teased the first riffs to pump up the crowd, before the entire band launched into a powerful showcase of what All Them Witches brings to the table.

The rhythm section of All Them Witches is the driving, relentless drums of Robby Staebler combined with the fuzzy thunder of vocalist Charles Michael Parks Jr.’s bass. Layered on top of it is the incredible talent of McCleod, who is equally adept at making his guitar snarl and sing. Joining them on tour was former bandmate and keyboardist Allan Van Cleave, who played on every album but the last. (Recorded at the legendary Abbey Road Studios.) His organ and piano add bright spots to an often dark and brooding mix.

While All Them Witches have plenty of three-to-four minute songs in their catalogue, they’re just as comfortable taking their time through a jam. (The Grateful Dead skull prominently grinning on McCleod’s amp hints at that appetite for longevity’s origin story.) As soon as Saturnine faded out they launched into the “Death of Coyote Woman”, an eight-minute saga long on rumbling bass lines and short on lyrics.

“Enemy of My Enemy” sped up the tempo, then it was back to long jams with “See You Next Fall”. Keeping a crowd’s attention during a drawn-out song with extended guitar solos takes talent. This reviewer was genuinely curious how these epics would translate to a live performance. The best indication, in my opinion, was a complete lack of phones lighting up faces in the crowd.

Fall led into “3-5-7” from Sleeping Through the War chased by fan favorite “Diamond” off ATW. An “Everest” interlude from McCleod gave the rest of the band a breather, then Parks gave McCleod a break by switching bass for acoustic guitar to deliver “The Children of Coyote Woman”. Van Cleave had a chance to shine on the latter, offering a sweet violin counterpoint to Parks’ plaintive song.

“Marriage of Coyote Woman” (completing the trilogy) offered a bluesy retort to the crunchy rock of the earlier half of the setlist, followed by the head bobbing “Alabaster”. What gets lost on recorded albums is the raw power of All Them Witches, and nothing showed this off better than showstopper “41”. The energy dipped one more time for an abbreviated “Rats in Ruin” (still in the neighborhood of seven minutes versus nine), before set closer “When God Comes Back”.

Enthusiastic encore calls from the crowd at The Abbey were rewarded by the soaring and triumphant “Blood and Sand/Milk and Endless Waters”.

Opening up the crowd were The Messenger Birds, a guitar-drum duo on the brink of blowing up. Their dark, compelling brand of rock comes courtesy of vocals and guitar by Parker Bengry and Chris Williams on drums.

The duo generates a lot of noise thanks to some deft footwork on Bengry’s pedalboard, allowing them to loop and layer guitars over a bed of complex drum patterns. The inevitable comparisons to Black Keys and White Stripes (both the Stripes and Messenger Birds hail from Detroit) miss the unique sound Messenger Birds offer.

St. Vincent Brings the Daddy’s Home Tour to the Egyptian Room and Wows the Crowd

Doug Hoekstra Takes You Away With “The Day Deserved”