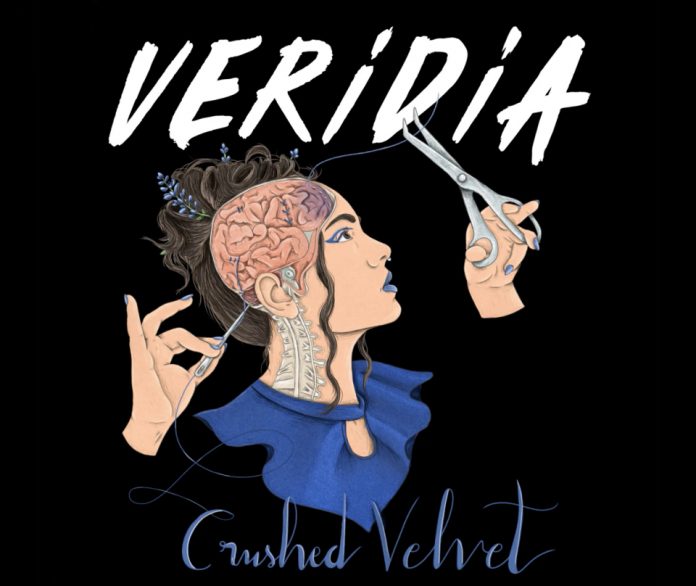 The band is somewhat new, having released their first EP Inseparable in 2014 and second EP Pretty Lies in 2015. Their first full-length album, The Beast You Feed, was independently released in 2018.

Deena has said that “Veridia means ‘of truth.’ It’s our creed, to strive for raw honesty in all that we do, being true to ourselves, the ones we love and in our music.”

“Crushed Velvet“, Veridia’s newest single, starts out very softly in the vocals and then the beat picks up with not just the vocals, but the instrumentals as well. Compared to previous Veridia songs, this one has a softer, more vulnerable sound while still keeping a rock vibe, such as in songs, “I Won’t Stay Down” and “Ghost.”

An interesting characteristic about Veridia is that they are not afraid to try out different sounds with their music. Even if the differences are not major, when it comes to their sound, there is something special about the band’s songs that makes each one unique in its own way.

I would rate this song a five out of five stars. “Crushed Velvet” is relatable. Deena’s voice behind her songs always seem to show some type of vulnerability and she portrays messages about mental health well in her lyrics. I look forward to seeing what else that Veridia has in store for us in the future.

If you want to hear more of Veridia, also check out the band’s song “Light It Up“, which was released earlier this year in September. It has an upbeat rock and EDM vibe to it, with a message about being a form of support and ally for people in their darkest moments.

Theory of a Deadman and Black Stone Cherry Rock the Roof Off the Egyptian Room!