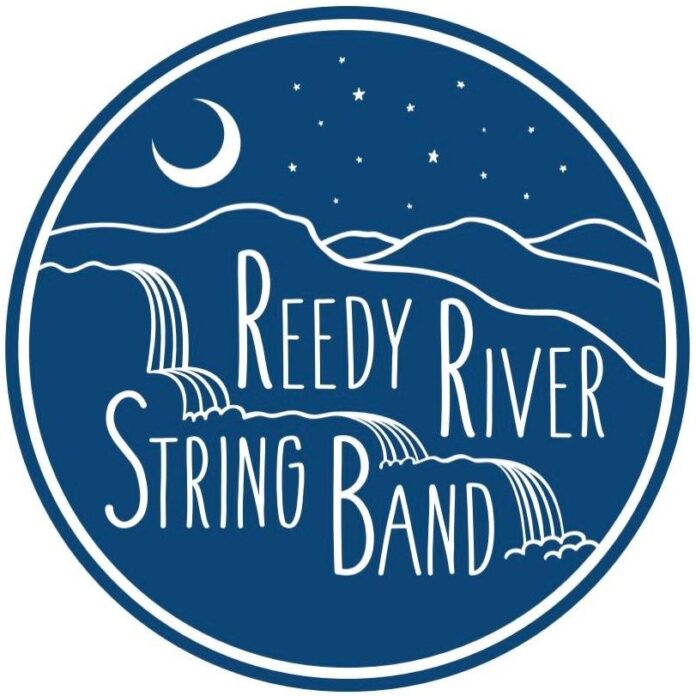 Greenville, SC – The weekend was fast approaching and Main Street was heating up when the Reedy River String Band, a trio comprised of Sterling Waite, Mark Dye, and Rush Morgan, took to the Downtown Alive stage at Noma Square to bring a foot-stompin’ double set of music to the crowd gathered in Greenville on a hot July evening.

Described as a three-part harmony that “brings a fresh take on Appalachian roots music infused with elements of rock n’ roll and jam band”, Reedy River String Band moves beyond that expectation to send your cup running over. Hailing from Greenville, the trio delivers the magic through an upright bass, guitar, banjo, fiddle, harmonica, and mandolin. From the moment your ears catch up with their sound and you feel their sheer enthusiasm, you will find yourself hooked and wanting more.

Digital Beat Magazine had an opportunity to check in with Sterling Waite to learn about the formation of the band, their music, next steps, and more.

Digital Beat Magazine: Thank you so much for sitting down with us, we are excited to introduce you to our readers. Let’s start off with talking a little about the formation of Reedy River String Band. Can you tell us about yourself and who the members are, how you guys formed this group, and your style of music?

Sterling Waite: I play fiddle, mandolin, banjo, and some harmonica. I started looking for an upright bass player last year by reaching out to musicians in the local community. At the same time, Mark Dye was looking for a fiddle player to start a string band!

Mark and I began looking for a guitar player to round out a three-piece group, and for a brief time, Andrew Crawford began rehearsing with the band. We only played one gig with Andrew before his other commitments became too great to continue with this band. In addition to releasing his own chart-topping bluegrass albums, he plays with Brandi Colt, and together they are “Crawford Colt.” We somewhat consider him the fourth member of the band as he has engineered, produced, performed and put his heart and soul into our upcoming debut album release.

After Andrew, Mark and I approached Rush Morgan about playing guitar. Funny enough, he had also been thinking about forming a string band and cemented the lineup in November 2021.

The band’s genre could be described as newgrass, jamgrass, or perhaps progressive bluegrass, but we are careful with the word “bluegrass,” as it often refers exclusively to traditional bluegrass music.

DBM: When the band performs, you deliver both original music and add your take to some cover songs as well. Can you tell us about working on new music as a band and share about your recent release “Hoedown”. Also, what would you say is your favorite cover tune to bring your style to and perform?

SW: This band has three lead singers and three songwriters. We are each pulling from our own body of original music while writing new material. Having such a great starting point for original content has helped us greatly.

I wrote “Hoedown” at the start of 2021, before starting to work on forming the band. Andrew Crawford also contributed the musical hook that starts and ends the song. We’re really happy with how our video with Brando Jones of this track came out as well as Andrew’s production of the first song as a single.

We play mainly original songs, but our favorite cover songs to play are old traditional songs that we rearrange and really make our own. We have heavily rearranged Raleigh and Spencer, a 100-year-old song about prohibition. We’ve done the same with Reuben’s Train, another traditional song. These songs have stuck around out of thousands of others now-forgotten songs that were circulating at that time. There almost seems to be some magic hidden in those old melodies.

DBM: You have been working on new music and have a host of upcoming show dates on the horizon, what else does the next year look like for you?

SW: Our six-track album is almost done and should be out later this Summer or in early Fall. All three of us sing lead on the record, like when we perform live. It also showcases songs written by each of the three band members. We’re really happy with Andrew’s production on this upcoming album and excited to share it!

This year we’ve been playing lots of breweries, some bars, and a few festivals. We played the pre-party for the Spring Albino Skunk Festival, and were recently asked to perform on Saturday October 8th during the Fall Albino Skunk Festival. We also played State Line Music Festival and are booked on several more festivals this fall.

We’re focusing mainly on festivals for next year.

DBM: If you all could choose anyone to be on a bill with or sit in on a set with you, who would it be and why?

SW: Billy Strings is at the top of my list. His band is full of fantastic top-notch musicians, and Strings himself is an undisputed heavy-weight on the six string. I love how live performances meld psychedelic jam-band sounds with elements of bluegrass. His music has been a big inspiration for the band.

DBM: We always like to ask musicians who THEY are listening to right now? Who are you streaming or what is in your current rotation?

DBM: Is there anything else you would like to add that I didn’t cover?

SW: We’ve been overwhelmed with the support and encouragement we’ve received as a new band. Thank you to everyone who’s attended shows and streamed our music!

DBM: Thank you again for taking the time to do this interview. Good luck with all your next steps and we are excited to catch you out there again soon!

Give Reedy River String Band a follow on socials, save their single on Spotify, get to a venue to see them play live, and someone call Billy Strings! Check out the video for “Hoedown”, by Brando Jones Films: