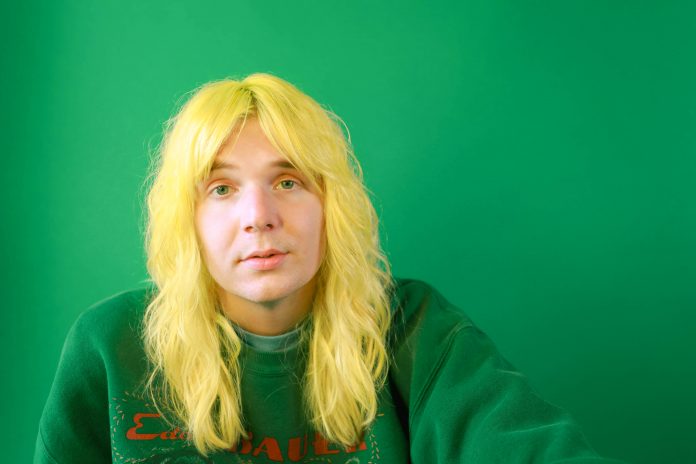 Jawny, formally known as Johnny Utah, is an indie pop artist based out of Los Angeles, California. He recently released “For Hugo” on July 15th. Digital Beat Magazine had a chance to talk with him about his latest release, upcoming tour, and much more.

Digital Beat Magazine: How do you feel like shows will be like returning from COVID, even though COVID still definitely exists?
Jawny: If you would’ve asked me 5 days ago, I would’ve told you I didn’t know. But now that you ask me today, it seems like it’s going, I mean I don’t know, it’s kind of a loaded question. How do I think it’s gonna go like right now, as someone who played a show, I think it’s gonna go good, because that happened. But, also the logical side of my brain, the moral side of my brain is like, well, now we also have to see what the side effects of that weekend were and like, how many people might have been affected? Or if it’s a total success and not a lot of people get affected with anything? Or if in three weeks, we learned that it was a f**cking disaster in light, like a bunch of people got COVID I don’t really know, time will really tell. I think that it felt pretty normal. It felt pretty safe as far as the rules. Now we’re finding out some of these vaccines may not be so good against some of these strains, but I thought the idea of making everyone show their Vax card or a negative result was pretty smart. I think time will really tell from an artist standpoint. It felt pretty damn normal, I’m pretty good. It’s a little weird not to do meet and greets and stuff after, but yeah, we’ll see what the numbers and the stats and the science say. I’m hopeful, but you never know. We’re gonna follow what’s morally right, so as of right now, we’re going on tour. But if sh*t gets crazy again, and delta starts going nuts and we can’t calm down, we’ll have to see and cross that bridge when we get there.

DBM: Are you excited now that’s it finally out and that more people are listening to it more?
Jawny: Yea 100% – I mean its a weird thing you know, cause you have these things that you hold very close to you and you listen to them dozens of times writing it. Then, you listen to it dozens of times while recording it. Then, when you have to get it mixed, you have to listen to it another 15-20 times to give all your mix notes. Then, when it gets mastered you hear it another couple times and then when you’re waiting for the projects to come out you probably listen to it another 20, 30, 40, 50 times. By the time you are at midnight the night before the release, you just have no idea what it sounds like to virgin ears or somebody who’s going to hear it for the very first time and isn’t in your head. It’s a weird feeling. It’s kinda like anxiety, but also this release of like “ah it’s the worlds now” and I don’t have any opinion about it. Whatever it does or how ever it translates, that’s what it is cause it’s not mine anymore. It’s kind of anxiety inducing but also relieving at the same time. It’s a weird mix that first couple days.

DBM: What was the creative process behind the music video for “Tombstone Grey” like, that vibe?
Jawny: It was crazy cause you know normally every music video I’ve ever done before, music videos I’ve made with friends in the past, is like you wake up and it’s normally either a day shoot or a two-day shoot. You show up and here’s what you’re going to do. You do a scene or you do a whatever, and it’s like alright now go take a break or now we’re cutting for lunch, so we are going to go eat lunch. Then, the day is wrapped and you get to go home to your dog or your wife or husband or whatever. You wake up the next day to finish it. But, this was a lot more different cause once you show up and once they click record on the camera you’re just on. There is no cutting and there is no stopping and there is no turning the character off to go eat lunch, you’re just on for the next 36 hours. So, that was kind of crazy. It gets super time sped up and gets crazy. When it dropped, I felt like people didn’t get it.  I was like, I think people think this is a stop motion music video or something, we didn’t put any text in the beginning explaining this video was filmed for 36 hours. I low key felt like it didn’t get any love, so I went to TikTok, which I never do cause I’m 25 and I don’t care about TikTok that much. I just made a video being like, Hey here’s the video that I shot, here’s what I did, we spent 36 hours. This scene took 3 hours, this scene took 2 hours, and I uploaded it and it went viral on TikTok. I think it got 1.6 million or something like that.  It was crazy, it was great. I felt like people understood it and the message got across. It was awesome.

DBM: You recorded your album sort of pre-COVID, cause that was 2020?
Jawny: I definitely finished it in COVID for sure. I did 85% at home, in general maybe 90% of it, and then I probably finished it as far as COVID goes, 60% during COVID. It was a lil’ COVID love baby, a cute little project I did got some love I think maybe. I don’t know, I thought it was cool at the time.

DBM: It probably kept you occupied during COVID a little bit? During quarantine?
Jawny: I think it did. I would for sure say that it took my brain off of the world for a second cause it was a dark place at the time. 100% I don’t go into it too much, but it was awful. People were losing their jobs and family members were losing their lives, people in other countries weren’t able to get the support that they needed or the supplies. You know everytime that you turned on the news it was some awful awful headline those first two or three months. That first two months it was crazy on the news. So yea, it was kind of nice in a selfish way to kind of block all that out and just focus on a passion project or something. To just block out some of the noise that was just taking me into a dark place.

DBM: Did you pick up any good habits, more free time activities?
Jawny: I didn’t take advantage of my free time as much as I should, i definitely played way too many video games, like way too many video games, and I actually got worse habits. I was eating a lot and I was gaining a bunch of weight and I wasn’t doing any physical exercise. I promise this all comes back around cause this is going to answer your question in another way, but yea I picked up terrible habits during COVID. It was like it tricked me. We were on tour and I’m flying back to the United States cause I was on a World Tour playing a festival, and then it’s like, this is what your life is like for the next two or three months. You’re going to go here, you’re going to do this tour, you’re going to go on this North American Tour. Then, all of the sudden it was like, hey everything’s halted. We are on hold for like two weeks. Then I’m yeah, two weeks. So, I’m going crazy, drinking alcohol, I’m ordering junk food, cause I’m just thinking its two weeks of my life. Then, it’s like, oh we are actually delayed for the next month and a half. So, I’m going crazy again like a little kid when his parents leave, running around with my pants off and eating like sh*t, drinking. All of it just keeps happening and then I ended up spending like a year just eating terribly and gaining weight and doing all these things. More recently, in the past four months, I’ve been eating super f**king healthy and I’ve been exercising. I’ve been going out on walks and only drinking water, and I’ve been eating just veggies and meat, and I feel like I have fixed myself. I’ve gotten myself back into healthy habits.

DBM: Of course now that everything is going to open back up and you’re going to go on tour, are you really excited to go on tour?
Jawny: I’m excited to go back on tour. Like I said, everything permitting. Right now in theory, I’m excited to go on tour, but also everyday I’ve been getting a lot of updates on delta and you know whatever delta plus this other strain of stuff, the science with the vaccines and are they working and all that sh*t. Like in theory I’m hyped, will it happen? I f**king hope, so but I’m just getting a little nervous, as I’m reading the news everyday. Cause we aren’t going to put anybody’s lives at risk. As of right now, we’re on and ready to rock in November, but if any crazy sh*t happens in the next month and a half, we are going to have to follow whatever the moral laws are. And we’ll see, right now my answer is yes I’m ready to go. I just have to explain myself so I don’t sound ignorant. “Like yea, we ready to f**king go out and rock and bring people in small spaces”, even though this sh*t is spiking right now, you know?

DBM: You just played in Chicago for your after show as well?
Jawny: We played Thalia Hall, it was a fire music hall. It was beautiful and old. I got to experience Chicago in a way I never got to before because there wasn’t a blizzard. I got to embrace how beautiful the city is, how nice the people are. Y’alls food is crazy over there too and I’m on my healthy sh*t and was eating like cuban food with meat and rice. It was living good in Chicago.

DBM: What’s your favorite venue that you have played anywhere?
Jawny: First, I gotta nod to Chicago – Lolla 2021.  But I don’t know man, we played this place in Amsterdam that was pretty f**king crazy. I don’t remember the venue name, its escaping me, but I do remember that being nuts. I don’t think it had anything to do with the venue why I liked that show, but I mean the venue was nice too. There was this cool upper loft area, like a tiny wide rectangle. It was a special show to me cause it was the first time I got to hear people in another country where I don’t live and some of them don’t speak English. I got to hear them all sing my song. I mean a lot of people there speak English, but you know what I mean, people somewhere else singing my song when I’m not from there, I’m a plane and a boat ride away across the ocean. It just blew my mind. I feel like Amsterdam holds a special little sweet spot in my heart, cause that was the first time i got to have that memory and it was cool. 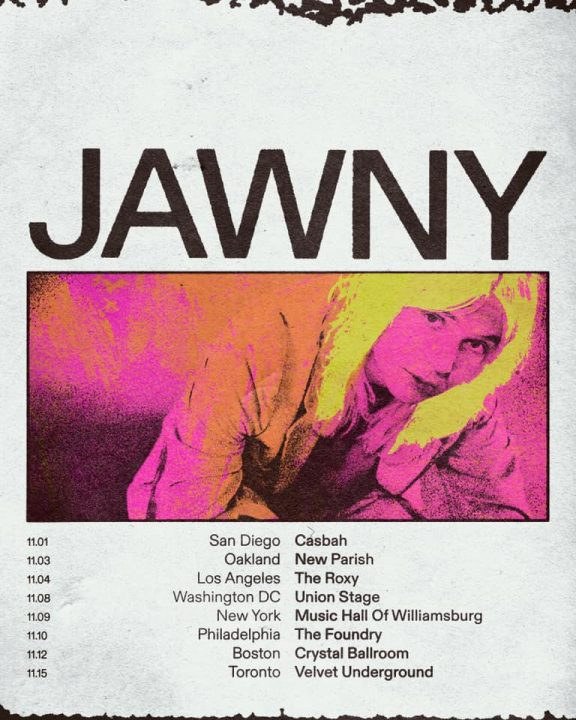