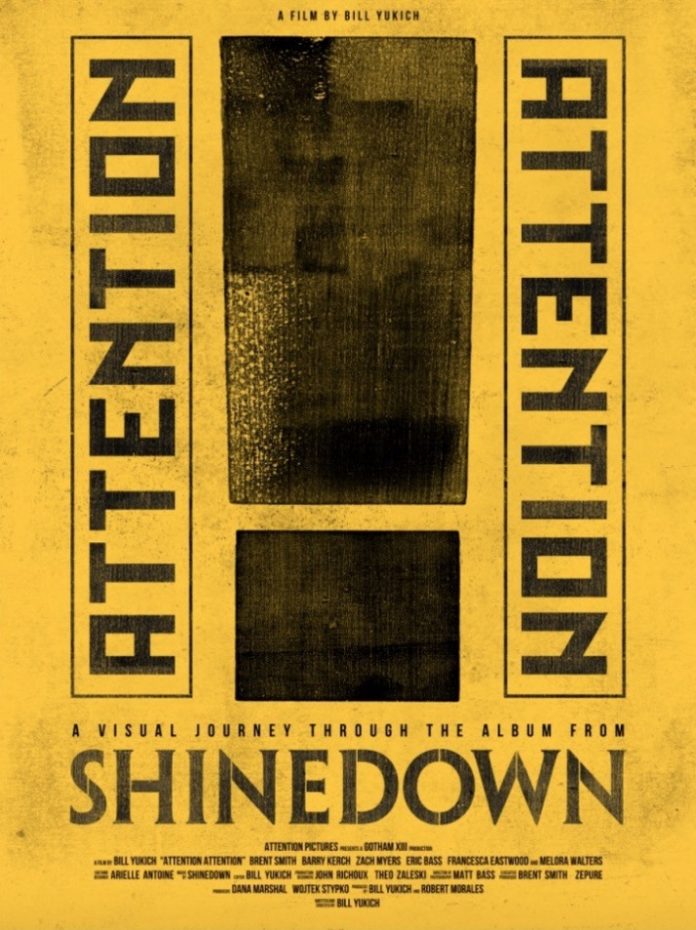 Shinedown, the hard rocking band from Jacksonville, Florida who have sold more than 10 million albums worldwide, with 11 platinum and gold singles and four platinum and gold albums to their credit, averaging more than 3.3 million monthly listeners on Spotify and who were recently named #1 on Billboard’s Greatest of All Time Mainstream Rock Artists chart, are bringing their latest album ATTENTION ATTENTION as a cinematic experience, and it will be available on both digital and cable Video on Demand, September 3rd via Gravitas Ventures. The film, Directed by Bill Yukich (Beyoncé, Metallica, Wiz Khalifa), is a special project for the band who have always had the vision of presenting the message of the concept album as both an audio and visual experience.

A stunning sonic and visual work of art, the forthcoming film brings to life the story of Shinedown’s acclaimed chart-topping album as it weaves its 14 songs into a provocative, visceral, and thought-provoking journey. Taking viewers along on a psychological, emotional, and physical ride from life’s lowest lows to the highest highs, ATTENTION ATTENTION incorporates Shinedown’s crossover anthem “GET UP”, the explosive “MONSTERS”, as well as the RIAA certified Gold hit “DEVIL”, title track “ATTENTION ATTENTION,” and the rousing “THE HUMAN RADIO.”

ATTENTION ATTENTION showcases Shinedown’s distinct mix of explosive rock ‘n’ roll spirit, thought-provoking lyrics, and melodic sensibility ushered in the band’s biggest and boldest chapter to date. The album, the band’s sixth full-length, simultaneously hit #1 on Billboard’s Alternative, Top Rock and Hard Rock Albums Charts and debuted Top 5 on the Billboard 200. The album has also racked up more than 622 million global streams and led the band to five iHeart Radio Music Award Nominations and major media acclaim. ATTENTION ATTENTION will feature theatrical performances from the band, Melora Walters (Magnolia, Big Love, PEN15) and Francesca Eastwood (Old, Twin Peaks, Fargo), as the film takes viewers along on a psychological and emotional ride, showcasing the journeys of individuals facing their emotions head-on as anxieties dissipate and demons disappear. What emerges is a powering and enduring statement about humanity, overcoming struggles, the importance of mental health, not being afraid to fail, and the resolve of the human spirit.

ATTENTION ATTENTION is available for pre-order on iTunes and will be released on September 3rd.