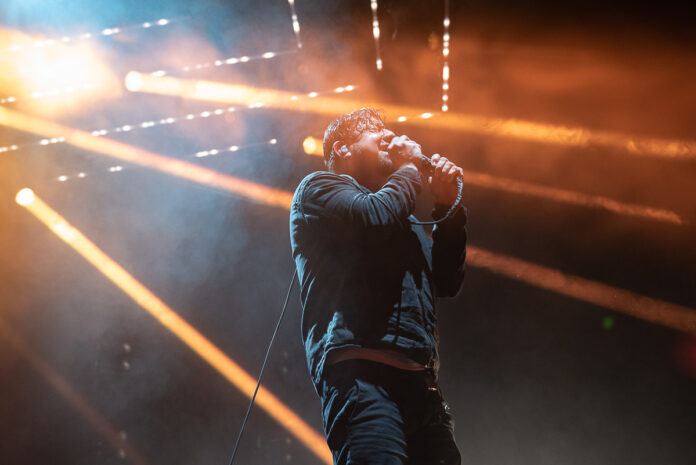 Atlanta, GA – There’s a handful of “Field of Dreams” bands with a big enough reputation that any tour announcement will guarantee “they will come.”

Deftones handily falls within that category, launching a simply titled “Spring 2022” tour that drew thousands of screaming fans Friday to Atlanta’s Cadence Bank Amphitheatre. The setlist rewarded their loyalty, cherry picking highlights from the past 30 years and nine albums, including 2020’s Ohms.

The outro of “Pompeji” drew the band to the stage, with frontman Chino Moreno bursting through a screen of haze to start off with “Genesis.” This and title track “Ohms” would be the only choices from their latest album, the latter bookending the set with its killer opening riff and jubilant chorus.

Deftones wasted no time bringing the heat, immediately transitioning into the frantic “Rocket Skates.” Moreno’s unique larynx-shredding vocals made its first debut of the night as he howled “guns, razors, kniiiiives” to the crowd’s delight. Every album took the spotlight at least once, with “Prayers/Triangles” serving as Gore’s contribution.

Diamond Eyes dominated with four tracks, beginning with “Royal.” Arguably two of the most famous tracks in Deftones’ repertoire came back-to-back, with “Be Quiet and Drive (Far Away)” chased by “My Own Summer (Shove It).” If a band’s most popular live songs are judged by the number of phones that pop up like backlit mushrooms, these were the “can’t miss” songs.

One of the defining characteristics of Deftones — and the reason behind their staying power — is their capacity for evolving sonically while staying true to their core sound and influences. They have something for everyone. Put another way, if you were kidnapped and dropped off at a random concert, you could probably guess what you were about to hear based on the T-shirts in the crowd. Not so much with Deftones. Friday’s crowd represented a spectrum of bands, from Slipknot to the Cure to post-punk English rockers IDLES.

That potpourri of influences shines through on tracks like “Tempest,” a slower number that gave everyone a breather. Moreno finished singing at the edge of the stage and flashed a grin, a warning for the bouncing “Swerve City” that was about to hit. A White Pony double feature followed, with “Digital Bath” packed next to “Knife Prty.”

While Moreno pinballed around the stage, the rest of the band stayed relatively static. Drummer Abe Cunningham shined as usual on a kit raised above the stage, while Stephen Carpenter built a wall of noise with a massive eight-string guitar. Frank Delgado sprinkled weird sounds and elegant layers from his usual perch behind the turntables and keys. Just before the tour began it was announced that longtime touring bassist Sergio Vega was leaving the band. Taking his spot was former Marilyn Manson bassist Fred Sablan. Making an appearance on about five songs was a “mystery” guitarist who has yet to be officially identified. His exact role is unclear because Moreno takes over on second guitar songs like “Sextape” and “Change (In the House of Flies).” (Two other songs that sparked a sea of cell phone screens.)

The encore took it back to the band’s nu-metal roots and the first real mosh pit of the night, with “Lotion” ushering in “Engine No. 9.”

Massive sound is a trademark for Deftones and their opener, Gojira, who were greeted with a roar loud enough to compete with their amplifiers. While more traditionally metal than Deftones, the French rockers share an experimental and ambient DNA that make them close cousins. Standout tracks included “Silvera,” “Stranded,” “L’enfant sauvage” and, of course, “Flying Whales.”

Also opening were VOWWS, an Australian duo with a look straight from the Matrix and a gloomy sound to match. Art rock mashed up with experimental soundscapes to create a unique brooding mix.