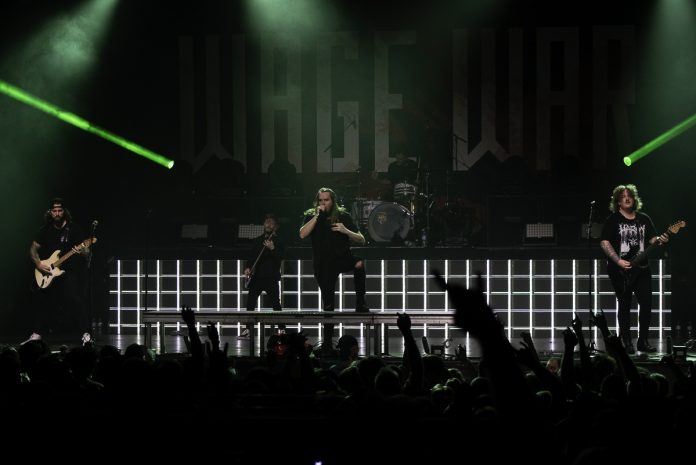 Orlando, FL – Wage War barreled through House of Blues Orlando on Saturday like a runaway train packed with TNT: dangerous, unpredictable, and explosive.

Playing to a seething mosh pit and a singalong crowd, the Ocala band wowed the crowd with a setlist that now spans four studio albums, following the October release of Manic.  The opening track of Manic, “Relapse,” started the show, the stuttering riff sending the crowd into a frenzy that didn’t let up for another 90 minutes.

Wage War dipped into their third album Pressure for the next two tracks, stringing together “Who I Am” then “Prison.” The lethal bass lines and thunderous breakdowns that characterized their second album, Deadweight, dominated the next three songs, with “Don’t Let Me Fade Away” chased by “Indestructible” and “Gravity.”

What makes Wage War’s music so successful, in this writer’s opinion, are the layers of talent each band member brings to the music. Briton Bond’s growls keep the headbangers happy, with the sweet counterpoint of guitarist Cody Quistad’s soaring vocals adding triumphant notes. Similarly, while Quistad lays a bed of crunchy riffs, lead guitarist Seth Blake adds bright outros and blistering solos. Chris Gaylord’s bass is always high in the recorded mix, and it threatens to stop your heart during live breakdowns. The last ingredient in this delicious metalcore gumbo is the crisp snap and double bass of Stephen Kluesener’s drumming.

This winning combination has matured and evolved over the years, blending the original DNA with new sounds that take notes from bands like Bring Me the Horizon. Wage War showed off their new toys over the next four songs — “Teeth,” “Godspeed,” “Manic,” and “High Horse” — and the crowd was happy to play along.

Bond took a minute to acknowledge the upcoming holidays and the feelings of depression and anxiety it can invoke before launching into a longtime setlist staple. “Youngblood” is a deeply personal track for the band written in tribute to a friend they lost to suicide before the debut of their first album, Blueprints. Blueprints supplied the next two tracks, “The River” and “Alive,” both ferocious anthems that, for many fans, were the snare that forever chained them to the band.

The tempo dipped slightly for “Me Against Myself,” then the band took a breather as swamp sounds filled up the House of Blues. A sea of raised hands — most forming the eternal metal horns — answered Bond’s roll call for the Florida fans to make themselves heard. “You know we’re crazy down here in Florida,” Bond said with a laugh, before launching into “Death Roll.” (Side note: Bond arguably deploys the best “blegh” in the business, but his vocals in “Death Roll” are borderline demonic.)

The stage went dark after set closer “Circle the Drain,” but everyone knew at least one encore song was forthcoming. The Man in Black’s recorded “Hello, I’m Johnny Cash,” tipped off the crowd to what was coming, and, sure enough, the heartbreaking “Johnny Cash” rocked the building’s foundations. True set closer “Stitch” ended with two confetti cannons sending massive clouds of paper all the way to back of the house.

Warming up the crowd was metalcore stalwarts Miss May I, who made a special trip from their home state of Ohio for the one-off show. While Wage War is approaching middle-management age in the metalcore arena, Miss May I is firmly in the C-suite. Fan favorites like “Hey Mister,” “Shadows Inside,” and “I.H.E.” were the gateway drug for many in the crowd, and they responded in kind with a circle pit that resembled a high-end Ninja blender.

Taking the stage first were Ocala bruisers Scattershot, with a potent blend of hardcore that evoked Hatebreed meeting Kublai Khan in a bad mood.