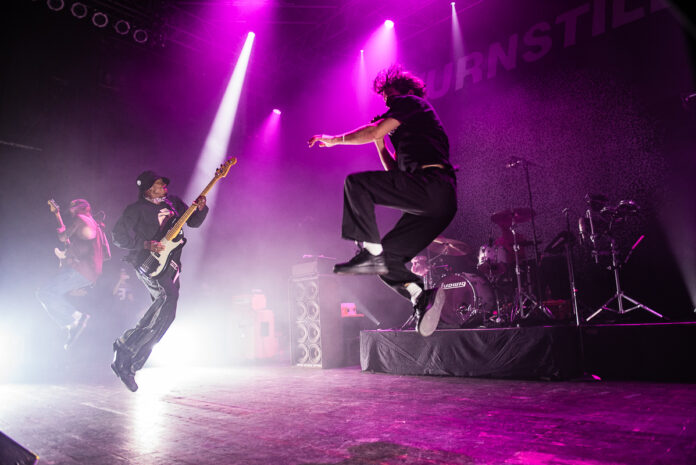 Orlando, FL – You know that scene in Pulp Fiction when Mia Wallace gets a syringe of adrenaline straight to the heart? That’s what a Turnstile show is like.

The impossibly catchy “HOLIDAY” kicked off the setlist at House of Blues Orlando, with front man Brendan Yates making a flying entrance from stage left. A sold-out crowd returned the energy with a roar, moving as much they could on a packed floor.

“HOLIDAY” hails from 2020’s Glow On, which launched Turnstile from playing basements in their native Baltimore to the late-night talk show circuit and high-profile festivals like Lollapalooza. They achieved success by building and expanding on songs from their hardcore roots like “Real Thing” and “Big Smile.”

What makes Turnstile accessible enough to garner endorsements from artists like Demi Lovato is their groove, with songs like “I Don’t Wanna Be Blind” serving as Exhibit A. The deadly combo of fat bass lines from “Freaky” Franz Lyons and the gunshot snare of Daniel Fang create a musical bedrock that dares you not to move. Fang got a chance later in the show to showcase his talents on a lengthy drum solo.

The crowd and the band got a breather with the slower tempo of “UNDERWATER BOI,” before “DON’T PLAY” reset the pace for two frantic songs clocking in under two minutes in true hardcore tradition, “The Things You Do” and “Drop.” The trade off for Turnstile’s rise to fame is the increasing removal from their audience, with the bigger venue barriers preventing the kind of DIY shows with nonstop stage dives they cut their teeth on. Yates did his best to make up for that remove, extending the microphone into the crowd and leading the audience through choruses.

Glow On made up the rest of the set, with the exception of Lyons showcasing his own vocals on “Moon.” (He also sings on “NO SURPRISE.”) Almost every band thanks the crowd throughout the night, but Turnstile made it personal by closing out with “T.L.C. (TURNSTILE LOVE CONNECTION).” The final verse featured prominently on merchandise, and it seemed a fitting tribute for a band that’s come so far in 12 years: “I want to thank you for letting me see myself, I want to thank you for letting me be myself.”