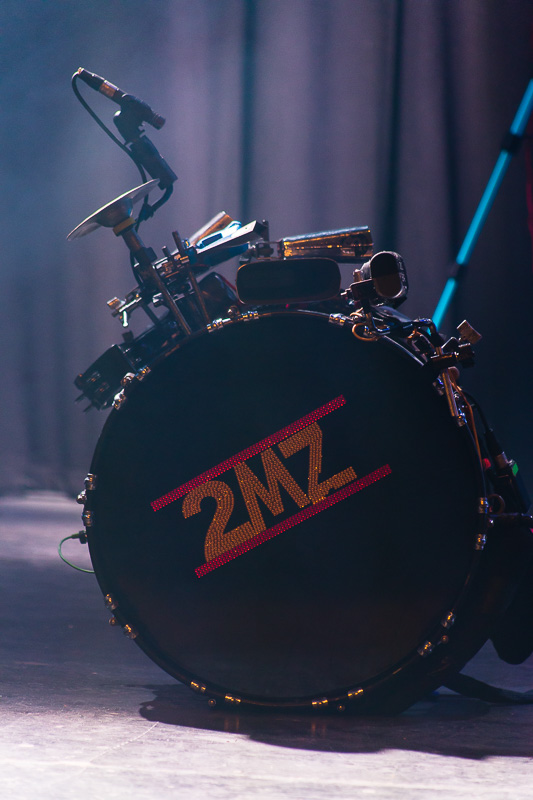 Toronto, Ontario, Canada – Too Many Zooz performed at the historic Danforth Music Hall (opened 100 years ago this August) on Saturday, March 9th. The band consists of three men from New York City, Leo Pellegrino on the baritone saxophone, Matt “Doe” Muirhead with the trumpet, and David “the King of Sludge” Parks keeping the beat on his simple yet well-integrated drum kit (cowbell included!).

Too Many Zooz got their start busking in the subway systems and streets of NYC. Since getting started in mid-2013, this self-defined brass-house band has left a mark on its fans. A big part of that mark is due to Leo Pellegrino and his never-ending characteristic dance moves and playing style that are unmatched by anyone.

By 2015, Too Many Zooz had been booked in small clubs and theatres across the USA. They have also played back up to none other than Beyonce for her televised CMA Awards performance in November of 2016 in Nashville, TN.

With a sound and feel like no other brass house trio I’ve ever heard, I highly recommend seeing these gentlemen live on their next tour. Until then, be sure to catch their latest album, Subway Gawdz, to keep you in the groove.

Opening the show for Too Many Zooz was eight-piece band, Five Alarm Funk. The band is over a decade into their career, now with six albums released. Their last album, Sweat, was released in 2017. Over that decade, the guys have gotten comfortable on the road as they have toured Canada. They have crossed the country and back while also going into the USA, as far south as Chattanooga, where they blew the roof of the Riverbend Festival back in 2017.

Five Alarm Funk started before having the idea of actually becoming a band. Instead, they were a bunch of guys with a strong mutual love for making music and getting together to jam with other like-minded colleagues joining in to sit in. From there, the band organically took shape into the super funky group they are now known to be.

With the love of funk obvious in the vibe and sound felt throughout the Danforth Music Hall, Five Alarm Funk also had a new song to debut while on this short six-date tour. The performed “Wake the Funk Up”, a track co-written with Leo Pellegrino from Too Many Zooz and Five Alarm Funk.