Legendary guitar master, Tom Morello, brought his revolutionary spirit to Asheville, NC and sent the packed house at The Orange Peel on a frenzy with an electrifying, immersive live production filled with tension-release cycles and emotionally-raw moments. 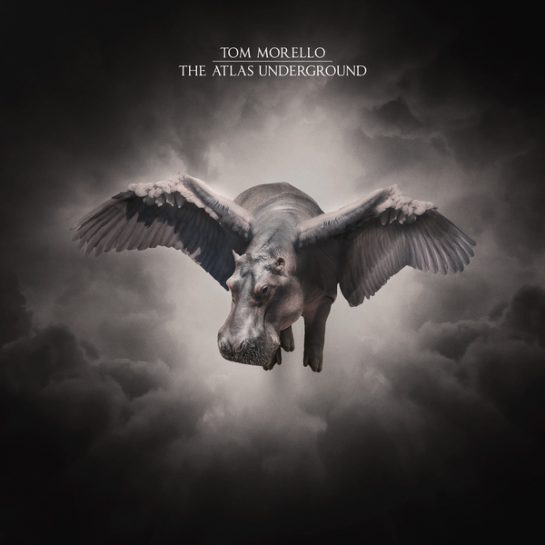 Morello is headlining a North American trek in support of his October 2018 solo album, The Atlas Underground. The project is a collaboration with a mix of artists, paving room for Morello to blend elements of rock and EDM, while unapologetically targeting themes of what he has identified as “social justice ghost stories.” The Atlas Underground is available now; listen HERE.

Tonight in Asheville the crowd was filled to the brim with anticipation. After a brief but mighty set from New York City-based The Last Internationale (do yourself a favor and check them out!), the stage was set for Tom Morello to take over The Orange Peel.

Thought-provoking and emotionally-moving human stories began to light up the screen over the front of the stage, although Morello would first be seen rising up to stand on a platform center-crowd while donning his notorious “Arm The Homeless” guitar.  He captivated the audience with his immediately identifiable sound and quickly connected with those around him.

Morello ultimately advanced to front stage and went on to spend the evening sharing his unique technique and talent. He also took a moment during the show to honor the late Chris Cornell, in which he asked for pin-drop silence while he picked his way through “Garden of Gethsemane.”  The audience shared his sentiment and a hush fell over the crowd.

As a socially-conscious musician, Morello carries with him a righteous anger as well as a deep love. He incites discomfort, activates awareness to privilege, inspires courage, and pushes for the world to stand up for justice. He is researched and unapologetic in telling stories of injustice, whether those plagues are impacting global societies or local communities.

In fact, after his time in Asheville, Morello offered this via his Instagram:
“Right now in North Carolina, thousands of people who have not been convicted of a crime are sitting in jail for one simple reason: because they do not have enough money to pay for bail.
.
People who cannot afford their bail are locked up while their cases go through the courts, which can take weeks, months, or even years. Those who can afford bail go free, allowing them to return to their homes, families, and jobs before their trial.
.
In the United States, we are all supposed to be treated as innocent until proven guilty. But that is not how cash bail works. Instead, it’s created two criminal justice systems: one for the rich and one for everybody else.
.
North Carolina’s current money bail system is broken. It’s time to make our voices heard and take a stand against the unjust for-profit bail industry. Go to Endcashbailnc.org to see how you can get involved.”

About the tour:
Tom Morello has described The Atlas Underground Tour as “one part Marshall stack guitar madness and one part bass drop meltdown. The show will be an intense sonic and visual ‘less talk, more rock’ experience that’s somewhere between a crazy mosh pit, an illegal rave, a subversive art installation, and a prison riot.”

Check out Tom Morello’s official lyric video for “Every Step That I Take”, ft. Portugal. The Man & Whethan: