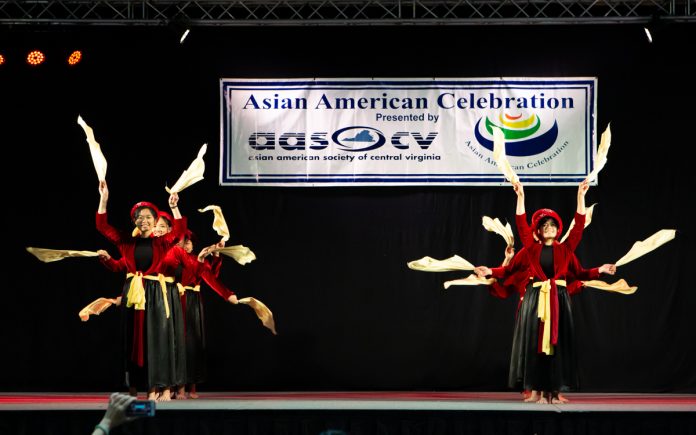 Richmond VA – Imagine if you will, a time and a place, where representatives from 17 different Asian communities gather for a day to share their traditions with all. Well, there is no need to imagine such a time or place. The time is every May, the place is the Greater Richmond Convention Center in Richmond, VA. This year, on Saturday, May 4th, the 22nd annual Asian American Celebration was held in downtown Richmond. It is one of the largest (if not the largest) Asian community event in Virginia and likely rivals any other event on the east coast. Nearly 4000 people from all over the region attended and participated in this annual celebration.

The themes of the events were as diverse as the communities participating. Dances and performances included celebrations of the seasons, the new year, courtship (I absolutely loved the Pailin Peacock dance from Cambodia), and nature to name a few.

One of the performance groups, Pacific Arts Troupe was founded in 2005 by Jaye and Sherry Li in Charlotte, NC. When Jaye relocated to VA she started a new branch in the Richmond area. The group is very active in the region and performs at several events throughout central Virginia. Members are as young as 5 and go up from there. Their costumes are traditional and come from China. Jaye Li seeks inspiration from music and choreographs all the performances to inspire the performers. Many of the dances are a fusion of eastern and western cultures.

Some of this year’s performances by the Pacific Arts Troupe included a martial arts demonstration, a new year’s dance performed by the children, and a piece called ‘My Loulan’ based on a beautiful Chinese song.

Pacific Arts, like many of the performing groups, integrate young and ‘less young’ alike. It is really refreshing to see so many communities passing on the tradition to younger generations. Even more refreshing is the outreach by several communities, as they do not appear to limit participation to any specific demographic. Case and point, the Taiko drum presentation (from the Japanese community) included participants from across the demographic spectrum. The K-pop dance routine and the Filipino Rigodon de Honor dance were also quite diverse.

For those who have not taken part in a cultural festival, I highly recommend taking in one or two. It is a great experience to learn about the traditions of those you interact with on a day to day basis. One group that has taken me under their wing is a Filipino dance troupe called Sayaw Diversity (I have received the title of Honorary Filipino as of this article). Dhol Tuason founded the group in 2017 after having been a professional dancer for many years. Many of her Filipino friends had expressed an interest in learning traditional dances with a desire to share those dances and traditions with the communities in which they lived. Since founding the group, they have performed their traditional dances (some with a more modern twist) to audiences throughout Virginia and beyond.

Of all the performances of the day, the Korean community likely had the most modern. As some readers may already know, the musical genre K-pop (Korean pop music) has been working its way into the American music scene with bands like BTS making quite a splash. The Korean community performed two musical numbers, the first being an original rap tune, the second being a song and modern dance mix.

Another active group in the Asian American Society is the Vietnamese community. Founded in 2006 by Kim Chi Nguyen, the troupe has performed over 30 different dances for audiences in and out of the Vietnamese community. The troupe was an offshoot of the Hue Quang Vietnamese Language Center in Henrico County where Nguyen is the principal. The school’s main purpose is to teach Vietnamese children the language and culture of Vietnam. The children were so engaged in learning the language and culture that the dance troupe was a logical next step. The participants range in age from 8-18 and are typically divided into 2-3 groups based on age, experience, and dance chosen. The clothing is often designed by many of the participants and usually custom made in Vietnam. The older girls often wear their own custom-made traditional dress, called áo dài, when a particular dance allows for variety and individualism. The dance music is deeply rooted in traditional Vietnamese music and tradition but often has a modern flare. Nguyen categorizes the performances (dance and music) as East meets West.

Led by Nguyen and the other teachers, the Vietnamese troupe performed 3 routines, ‘Oh Beautiful Country’ by the younger students, and ‘Spring Reunion’ and ‘Thread into Needle’ by the older students.

Sadly, it would not be possible to talk to every group that participated in the event (it means I have to go back a few more times!). During the day there were multiple performances by the following communities: Thai, Korean, Chinese, Indonesian, Indian, Filipino, Japanese, Myanmar, Bangladeshi, Singaporean, Malaysian, Cambodian and more.

There was more to take in than the performances. Many of the communities offered hands-on activities. From learning how to make the candle stand called a Diya (used during the Festival of Light, Diwali, in India), to Henna hand painting in Bangladesh, or making a Malaysian Wau Bulan (or moon) kites, there were many fun activities. Hand-eye coordination, not your thing? The Cambodian booth was demonstrating how to properly greet someone in Khmer!

Finally, what would any cultural event be without ethnic food? The big bonus?! This was a cultural festival with 17+ groups participating! There were so many things to choose from, not enough time to sample many! There was definitely something for even the pickiest of eaters!

I could go on and on about the wonders of this festival. I know it has been around for 22 years, and I am afraid one could not experience all there is to offer in 22 years. Just as the name implies, Asian American Celebration, this is indeed an event to celebrate. The event is extremely well organized, the cultural immersion is non-stop, there is nothing bad that can be said about this event.  I am already looking forward to May of next year. Any suggestions on next year’s focus?

Community Series: A look into life during the Pandemic – Jesse Rice

Community Series: A look into life during the Pandemic – Photographic Melodie