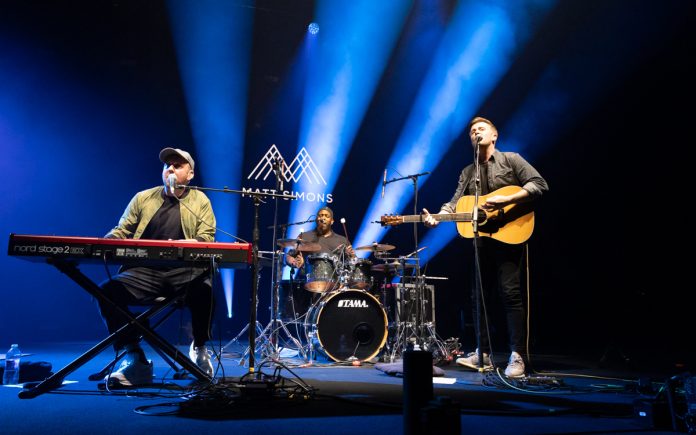 Fairfax, VA – When I was approached about doing a review of Matt Simons opening for 2Cellos at EagleBank Arena, I thought if I went in from the perspective of a 2Cellos groupie with no expectations from the supporting band, it would be a very genuine experience and review. I went in as a stranger.

The show opened in darkness. Matt came out to loud applause and took a seat behind the keyboard. He started to play “After the Landslide” from his 2019 album of the same name… the lights slowly came up. Matt proceeded to treat us to an emotional solo piece that, from the start, moved the audience and let us get a glimpse of his heart.

As the band, consisting of Rodney Flood (drums) and Chris Ayer (guitar), walked on stage, Matt changed to a more upbeat “Summer with You”. From there, keeping with the upbeat and heartfelt songs, the band transitioned to “Open Up”.

Taking a breather to say “Hi” to those in attendance, Matt thanked all for ‘coming early’ to catch the opener! He then joked, “I bet some of you didn’t even know there was an opener” and the audience laughed with him. It was at this point I knew I made the right choice to go in cold, as Matt connected with not just me but the rest of the near sold out arena. The feeling was real and deep. It was obvious he took great pride in his relationship with his old fans and strived to make that connection with his soon to be new fans and maybe even new friends.

The audience connection did not stop after that. Upon the completion of “Not Falling Apart”, he told us the story of his next song, which was written based on him telling his then fiancé (when he proposed) that “We Can Do Better”, garnering quite the laugh from the audience. The connection deepened as he shared that no one has EVER laughed like we did. What he MEANT was they would get better the more they were together.

Matt finished off his set with a cover of Simon and Garfunkel’s “The Boxer”. It was a powerful cover which we learned he had been playing with Ayer for about decade. The strength of their connection was clear, as they continued to develop their audience relationship.

The final piece for the night was “Catch and Release”. He once again gave us a look into his outlook on relationships and life. All throughout the day, indeed, we do catch… and then release… so many things that have impact our lives.

Yes, I went in cold, a stranger to Matt like many in attendance. As he went through his set, I could feel the strong connection he was making with all, sharing his heart and soul  through his music. While I cannot speak for everyone, I think it is safe to say, he walked on stage as a stranger to many. As he departed, he left a few thousand new friends and a wonderful memory. Hope he makes it back this way soon!

Want to see more? Check out, “We Can Do Better!” Great Video!