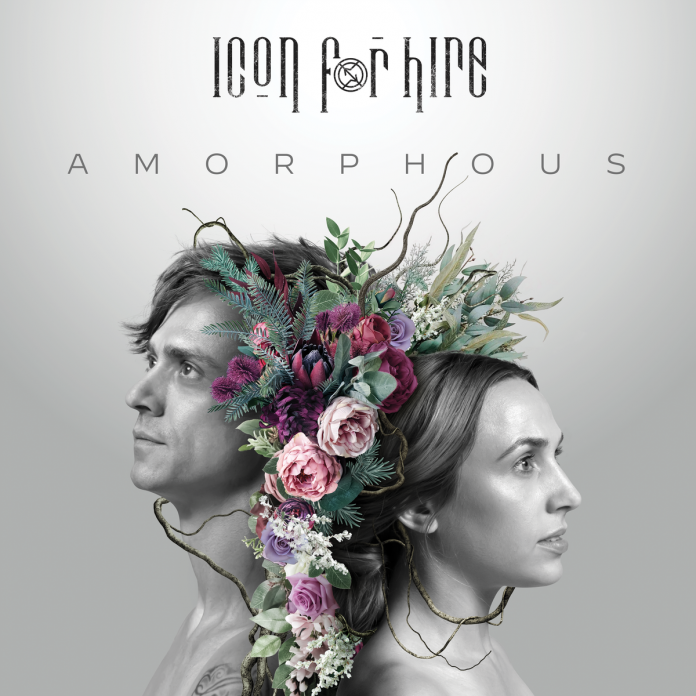 Modern rock band Icon For Hire is set to release their new album, Amorphous, this Friday, February 19th. Formed in 2007 and originally from Decatur, Illinois, the now Nashville based band consists of Ariel Bloomer (vocals) and Shawn Jump (guitarist). Amorphous is the band’s first full-length since 2016’s You Can’t Kill Us.

Icon For Hire is never afraid to push the limits when it comes to their sound. Former songs such as “Bam Bam Pop” and “Now You Know” have more of a pop element to them. With Amorphous, each song has something that makes it unique, whether it be the vocals, guitar riffs or effects of the keyboard. Most, if not all, the songs on the album focus on mental health of some sort.

There is a perfect blend of multiple genres in Amorphous. The album mixes electronic elements with pop rock and hints of R&B/Hip hop music. There are songs that make you want to rock out and songs that show vulnerability. Compared to previous Icon For Hire albums, this one has a lot more experimentation with a variety of sounds.

Many songs on this album not only have themes related to mental health, but also focus on not letting demons get to you, whether they be in your head or people in your life. An example of this exists on the track “Last One Standing“:

An easy target, an easy mark

But how you think I got this far?

I’ll turn to face you

Then I’ll erase you

The lyrics seem to say that even if you are a target, do not let anybody tell you that you are not capable. Rather, erase them from your life and prove them wrong. This song has a strong beat that makes you want to get up and dance your worries away.

The song, “Warrior“, has vulnerability – giving off a soft sound mixed with rougher elements. The lyrics appear to represent painful times, reminding us that we all have wounds but our wounds can make us stronger.

The album overall encompasses a perfect mix of soft and hard listening. The relatability of the lyrics really hit home. It reminds us that challenges in mental health do not have to run our life or define us and our path. There is a message of hope, in overcoming our challenges. Amorphous is a five out of five.

Check out Icon For Hire‘s official music video for  “Last One Standing”:

Erin and The Wildfire Release Their Second Album ‘Touchy Feely’