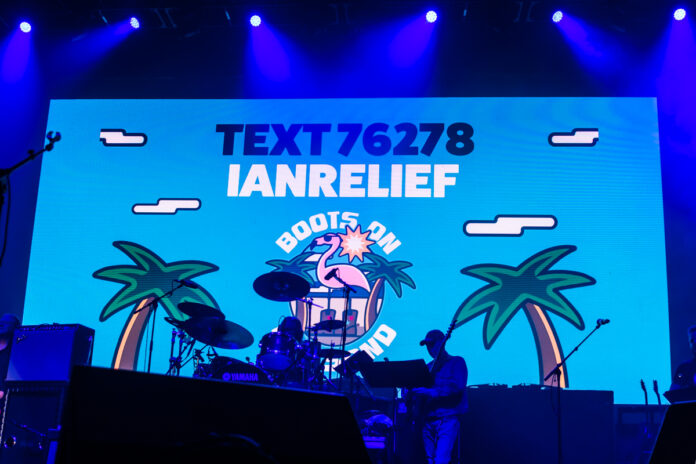 Estero, Fl – On September 28, 2022, Hurricane Ian, a category 4 monster storm, caused catastrophic damage along the southwest Florida coast. As is usually the case, music and comedy are helping those impacted heal, or at least forget about their troubles for just a little while. On December 1, 2022, the Hertz Arena, in Estero, Fl, hosted the Boots on the Sand Benefit Concert and featureed headliners Lynyrd Skynyrd with Brian Kelly, Ira Dean, Ted Nugent, RaeLynn, Gavin Degraw and Tracy Lawrence. Naples, FL resident, comedian Jim Breuer, hosted the event.

The concert, brainchild of Ira Dean, was designed to help those in Southwest Florida who have lost so much as a result of the storm.  It is important to note that the amazing amount of star power that crossed the stage at the Hertz Arena on December 1st, 2022 during the Boots on the Sand Benefit Concert did not accept one red cent for their performance or appearance. By mid-show, Jim Breuer proudly announces that fundraising already exceeds $1.5M. Proceeds will go to disaster-relief efforts through the Florida Disaster Fund, Collier Community Foundation, Collaboratory and Charlotte Community Foundation.

Jim Breuer, comedian and SNL alumni, starts the evening with a warm welcome to the sold-out crowd at the Hertz Arena. He wastes no time in getting to the comedy. Jim is a transplant from the northeast, currently residing in Naples, Fl, and uses his experiences there to bring humor to the event. Much to the delight of the attendees, Jim does include references to some of his most popular material, including the references to Brian Johnson of ACDC vocal delivery style and also Metallica.

RaeLynn opens the musical performances at the Boots on the Sand show. She is quick to point out that she is a Texas girl but did not hesitate to sign up when approached to perform at the benefit. The former Voice contestant with a couple of big hits to her name, also has acting credits having acted in the Hallmark Channel‘s “A Nashville Christmas Carol”.

Ira Dean, who came up with the idea for the show after seeing endless videos of the destruction in Southwest Florida, stated that he simply began calling friends to ask if they would be part of the event. As evidenced by the lineup, he did not have a problem filling slots with great talent for a great cause.

Ira is followed by Tracy Lawrence and receives a very warm welcome from fans. His traditional country style fits right in with those in attendance. Fans are especially enthused when Tracy plays some of his decades spanning hits.

Brian Kelley, Florida native and former member of Florida Georgia line, comes on stage to the roar of the crowd.  He proceeds to tell the crowd of his ties to Florida and how much this means to him. During his set, he mentions that he sat pondering what he could do and ask the Lord to show him how he can help.  Per Brian, that was the catalyst for his release “Florida Strong”, from which all proceeds are being donated to support Hurricane Ian recovery efforts.

One half of country super-duo, Big and Rich, takes the stage next. John Rich has the traditional cowboy persona image and complements that with a rhinestone lined guitar with Muzik Mafia prominently displayed along the neck. He wows the crowd with a collection of some of his biggest hits, including a crowd favorite, “Save a Horse”. John is not afraid to share his patriotism and love for America and is well received by fans in Estero, Fl this evening. As he completes his time on stage, he lifts his guitar, having “SCREAM!” brightly written across the back, generating a great response from those in attendance.

Arguably the one artist that breaks the mold, so to speak, for this show is Gavin Degraw. The piano man doesn’t quite fit in to the Country / Southern Rock theme of the show, but delivers a fantastic set, nonetheless. Jim Breuer tells a story while introducing Gavin of how he saw Gavin playing a small bar in the northeast and how Gavin, who recognized Jim from his SNL gig, stated that he wished Jim hadn’t seen him at the time. Gavin had plans to be much, much bigger. Gavin ends his set with one if his biggest hits, “I Don’t Wanna Be”. Looking through the crowd at this time, you can see a sea of the younger audience members up, dancing and singing along, word for word. It’s a great finish to a soulful set by Gavin.

Ted Nugent pulls no punches and lets everyone know he is a proud American. He opens his set with the introduction of Lee County’s sheriff, Carmine Marceno, who plays a very visible and vocal role in the recovery efforts for Lee County post storm. Ted proceeds to deliver a spectacular rendition of the Star-Spangled Banner. Ted and his guitarist Derek St. Holmes fascinate with a powerhouse set of fan favorites including “Stranglehold” and “Cat Scratch Fever”. Love him or hate him, Ted is fun to watch live.

Lynyrd Skynyrd, the night’s headliner, take the stage after a very impactful video detailing the destruction caused by Hurricane Ian to Southwest, Fl. A video montage set to ACDC’s “Thunderstruck” opens the set for Lynyrd Skynyrd. Fans are filled with anticipation and on their feet as Lynyrd Skynyrd takes that stage and rips into “Working for MCA“. The band tears through what is an endless list of hit after hit after hit. The venue is one big party as it is a challenge to find anyone in their seat.  As the first guitar riffs of “Sweet Home Alabama” are played, the crowd goes crazy. The band is joined on stage by some of the other performers including Ira Dean, Brian Kelley, Gavin Degraw and host Jim Breuer for the iconic chorus of the song. The band returns for an encore with the timeless classic, “Freebird” to bring an end to an incredible night of music.

The end result of the evening, a fantastic time had by all, a lot of money raised through donations and silent auction items and an opportunity to forget about life’s problems, even if just for a moment.