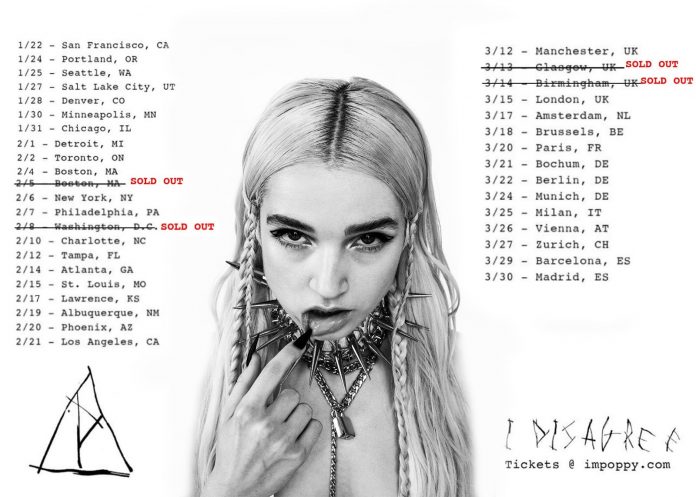 The continuing evolution of Poppy continues with the release of her newest album, I Disagree (available on Sumerian Records). The release is just prior to the post-genre art and music visionary artist’s upcoming U.S. and European tours. The album boasts a sound that is beyond alternative and can best be described as a fusion of pop, progressive, electronic, and metal, underpinned by unpredictable time signature shifts and indelible earworm vocal hooks. Coincident with the release of I Disagree, Poppy has released a new video for “Anything Like Me”, which combines old and new – an image reminiscent of a Poppy that has not been seen for some time.

The album marks a dynamic and deliberate shift to “Poppy Version X.” The album is sure to bolster her already half billion plus YouTube views as fans who have witnessed the Poppy-morphosis to an unassuming paragon of high culture, high fashion, and high art wish to take in the latest shift. She explains that, “in terms of doing what I wanted to in every element from start-to-finish, this feels like my first album. The narrative is really about destroying the things that try to destroy you.”

That message is well portrayed in her videos for “Concrete” as well as the title track, “Bloodmoney”. Poppy carefully constructed the sonic framework for this reinvention throughout 2019. Under the influence of a plethora of artists from Madonna, Air, and Gary Numan to Nine Inch Nails and Marilyn Manson, she took the reins and built the album in an unfiltered and unfettered creative ecosystem of her own design, expanding the sonic palette with an arsenal of analog synths and sonic flourishes.

The album’s release is soon to be followed by the 37 date (and counting) I Disagree Tour. The US leg begins January 22, 2020 in San Francisco, CA, and continues across the US throughout February before heading to the UK and Europe in March. Tickets & VIP packages are available now – see a full list of tour dates and ticket information HERE.