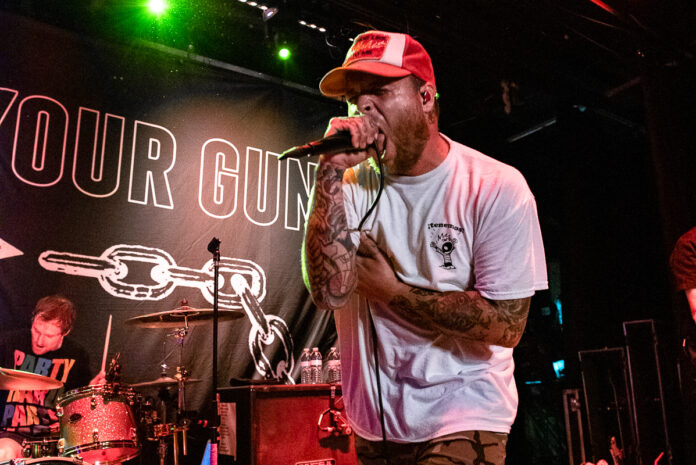 Orlando, FL – Eighteen stops into a cross-country tour couldn’t diminish the raw energy of Stick To Your Guns or any of the opening bands on the Spectre Tour.

The Orange County, California, rockers shook the foundations of The Abbey in Orlando with a 13-song set that showcased a career built on their unique brand of hardcore punk and defiant lyrics. Set opener “Nobody” kicked things off, with frontman Jesse Barnett practically sprinting from one side of the small stage to another to scream in fans’ faces.

The rest of the band had no trouble keeping pace, with guitarist Chris Rawson treating the stage like a trampoline for high jumps. “Empty Heads” kept the crowd shoved against the stage banging their heads, the two-step breakdown inspiring chaos in the pit.

The first track from Spectre was the anthemic “Weapon,” chased by “Such Pain” from Diamond. The band returned to Spectre with “Hush,” a withering track that borrowed more from metalcore than their punk roots. The setlist continued from there with every other song from Spectre, mixing new songs with fan favorites going back almost two decades. One surprise was a lack of any songs from 2017’s True View, including “Married to the Noise.”

Still, that’s a small quibble compared against what did make the show, including closer “This is More” which first debuted in 2005. The already thin line between crowd and performer completely collapsed at the end, with the stage flooded by people singing along and sharing the mic.

True to their punk roots, not many songs clocked over three minutes, meaning the entire set lasted under an hour. Stick To Your Guns poured every bit of energy into their set, though, and the crowd returned it in full. Absolutely do not miss this show.

A stacked lineup of four bands got the crowd warmed up for Stick To Your Guns. This writer loathes hyperbole, but it is no exaggeration to say Kublai Khan TX was absolutely insane. I saw Kublai Khan TX a couple of months ago open for Knocked Loose and it was epic, but that was in the somewhat tamer House of Blues Orlando. Ditch the barrier and put them on a stage just three feet off the floor and you’ve got a recipe for the apocalypse.

Frontman Matt Honeycutt was just three bars into “Swan Song” when the crowd surged the stage and the push pit exploded. The twelve song setlist covered everything in their arsenal, but, in this writer’s opinion, “The Truest Love” was hands down the best track.

Belmont hews closer to pop punk than knuckle-dragging beatdown, but their energy level was equally nonstop. Up-and-comers KOYO (also on that Knocked Loose tour) and Foreign Hands proved they are hungry enough to earn their headlining tour in just a few short years.