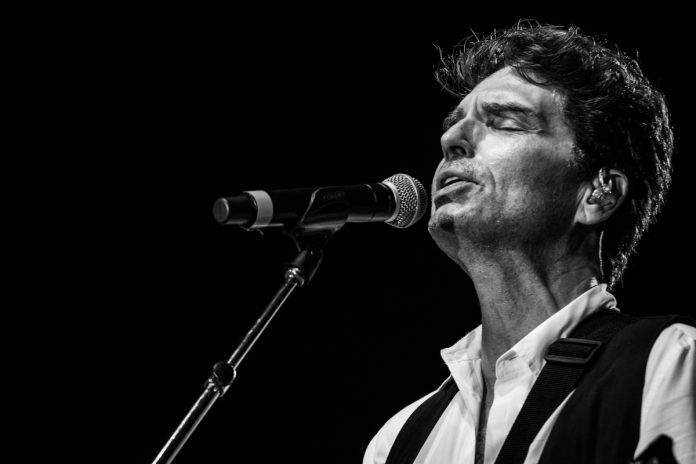 Miami, Fl – Richard Marx and John Waite bring the magic of the power ballad to the Magic City Casino on April 13, 2019. Against the backdrop of chamber of commerce weather on a Saturday evening in the Spring, these two performers sing their way into the ladies’ hearts. While the fan demographic has aged, the enthusiasm and excitement is still at a fever pitch.

The evening begins with John Waite taking the stage as the sun begins to set on the Magic City. He kicks off the set with a cover of Midnight Rendezvous by The Babys.  John wastes no time getting into the songs that the fans came to here by jumping right into the Bad English mega hit, “When I See You Smile“. Some fans may not know this, but Bad English was considered a super-group and consisted of Johnathan Cain (Keyboards), Neal Schon (Guitar) and Deen Castronovo (Drums) of Journey fame, along with John Waite (Vocals).

John Waite’s band, on this night, includes Mark Ricciardi (Guitar), Tim Hogan (Bass Guitar), Rhondo (Drums) and of course, John Waite (Vocals, Guitar).  As the band nears the end of their set, Rhondo launches into a drum solo, uncommon for an opening act, but entertaining all the same. The band rips into “Back on My Feet Again“, the power ballad, “Missing You” and ends their set with a blistering cover of Led Zeppelin’s “Whole Lotta Love“.

Richard Marx takes the stage long after the sun sets and the night is balmy, yet breezy.  It is the perfect setting to enjoy what promises to be a laid back evening of reminiscing.  Richard wasted no time in jumping into the hits, there are so many of them. Right after “Never Let Me Down“, Richard plays “Endless Summer Nights“. The irony is that a Spring evening in Miami feels like an endless summer night.  The set also included a new  song, “Front Row Seat“, which the crowd had a very positive reaction to.

Richard Marx is a great songwriter and vocalist. He is also a great story teller. He adds anecdotes and commentary as he moves through his set.  He tells the fans that in addition to the songs that we have all come to know and love, he has also written songs for many other artists who have taken those songs to the top of the charts. He then performs “This I Promise You” of NSync fame followed by “Long Hot Summer“, made famous by Keith Urban.

Richard continues though the set including a medley of his mega-hits “Hold on to the Night” and “Now and Forever“. The evening closes in dramatic style with four consecutive fan favorites that include “Should’ve Known Better“, “Satisfied“, “Don’t Mean Nothing” and “Right Here Waiting“.

Overall, this was a great show and I would recommend that anyone who is a fan of either of these fantastic artists catch it if it comes near their town. This is just another example of the many great acts that the Magic City Casino brings to the heart of South Florida. This venue is becoming a concert destination for the market at a price point that is more affordable than some of the larger venues in the area.  I look forward to seeing what acts will be added in the upcoming season.