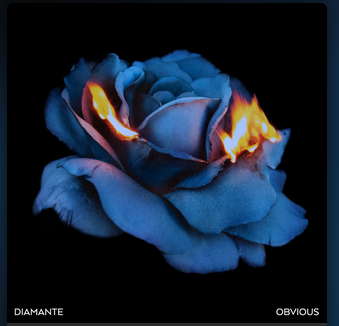 Diamante is a phenomenal artist who has accomplished so much at a young age. She shines with over 10 million audio streams to date, 20 million YouTube views with her music videos including her songs “Haunted,” “Sleepwalking” and “Black Heart” to name a few. She has also reached the Top 40 of Hot Rock songs in 2018 with her single “Hear Me Now.” In June 2018, Coming in Hot debuted at number twelve on Billboard’s Heatseekers chart.

In my opinion, Diamante is a living example of the quote, “Make your life a masterpiece; imagine no limitations on what you can be, have or do.”

Her previous releases, “Definitely Not In Love” and “Sound of Us,” have a uniquely aggressive rock vibe. These two songs, in particular, are my personal favorites because of their relatability. These two songs make me think of all the times someone has told me I can’t do something and I how I have proved them wrong. It also reminds me of times where I have had relationships that were negative for myself. If I were to compare her to an artist, it would be Lzzy Hale from Halestorm. Her vocal tone reminds me a lot of Lzzy. In fact, when I first heard the song “Definitely Not In Love,” I thought it was Lzzy Hale. I believe that their vocal tones are similar and they both have a positive message portrayed in their songs.

Today (1/17/20) at midnight, Diamante officially released her new single, “Obvious“, and I had an opportunity to spend some time with it. The song starts with a rough and aggressive guitar solo. Diamante begins to sing her lyrics softly, yet throughout the song her tone picks up. The rough guitar makes you expect something rough in her voice in the beginning. Midway through the song, the drums and the guitar pick up. Compared to her other songs, this one seems to have both a softness and roughness. What surprised me was the soft tone that “Obvious” opens with, before kicking into high gear –  true Diamante fashion. Lyrically, Diamante pulls in the audience so they too can feel the pain suffered from a past relationship, relating to what many of us have also experienced at some point in our lives. The song speaks about a relationship of which she still cared for a partner that no longer cares for her and has moved on to someone else.

While listening to her newest single, you clearly get to hear the growth and progression that Diamante has already made as a singer and songwriter. Being able to put your own personal experiences into words that allows your audience to relate is no easy feat for any artist. With this kind of growth in her career, Diamante is showing the world that she is brave enough to show a bit of a softer side, even as she keeps a harder edge.

Watch the official lyric video for “Obvious” by DIAMANTE: