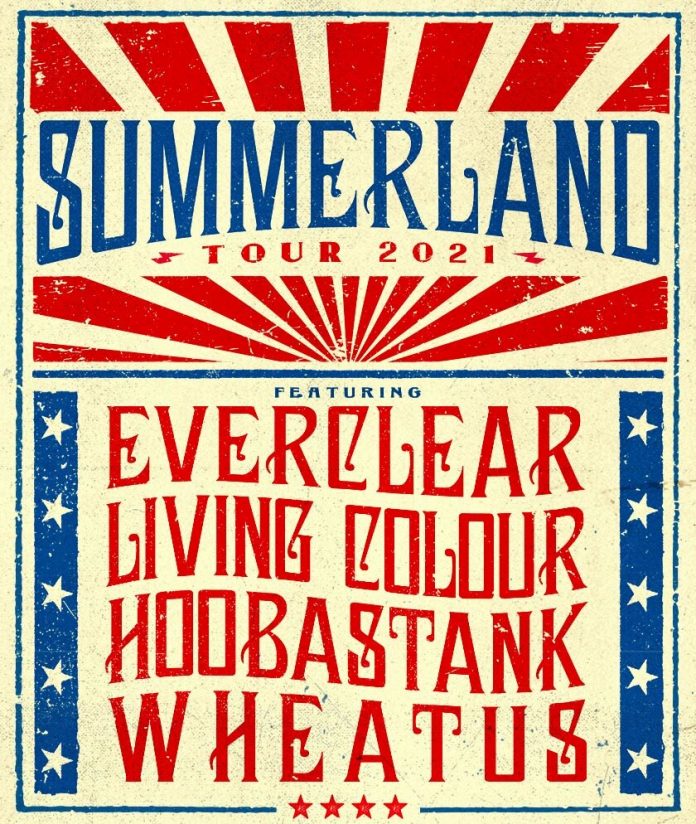 Black Mountain, NC – The force and fun of the ‘90s was back to shine when the Summerland Tour rolled into the mountains and delighted a multitude of eager fans. Not only was this an evening that brought the audience a host of favorite tunes by Everclear, Hoobastank, Living Colour and Wheatus, it also signaled the bright return of gathering together to enjoy live music.

The line-up kicked off with alternative-pop rock of Wheatus. Lead vocalist, guitarist and only remaining founding member, Brendan B. Brown, stepped onto the stage with the rest of the band to begin what would be an awesome return to what we have all been missing. Dual drummers were housed in the middle of the stage and the landscape radiated out to keyboards, backup vocalists, and bass. As audience members continued to move through the crowd and find their places, Wheatus served up sounds like sweat tea on a warm summer evening.

Energy levels picked up quick, as Living Colour sizzled through their electrifying set and easily got the crowd on their feet. Corey Glover (vocals), Vernon Reid (guitar), Doug Wimbish (bass), and Will Calhoun (drums) sent off positive vibes and the crowd returned all that love plus more. A band that could not be mistaken yesteryear or today, their mixture of diverse melodies, dynamic stage presence and confidence in bright colors still shine so brilliantly that it even seemed to make the sun question the natural rhythm of the day and evade the transition to nightfall.

Next to bring some magic and remind us why they hold such a dedicated fan base, Hoobastank. Undeterred by a light shower of rain, lead singer Doug Robb, guitarist Dan Estrin, drummer Chris Hesse, and bassist Jesse Charland stormed the stage and drove the crowd into a frenzy. With their command on point, they ripped through fan favorites, emoted through their signature power ballad and cemented the celebration of this evening’s return to live music.

Nostalgia was spreading through the crowd like embers from a campfire when alternative rock group (hailing from Portland, Oregon), Everclear, would fill the headlining role and close out the night. The set was everything you might expect from these pioneers, although it was also a homecoming of sorts. Lead vocalist and guitarist Art Alexakis shared about a time when his mother had lived in Black Mountain before her death. He had been visiting her and penned the song “Fire Maple Song” while sitting on her porch. It was a touching moment of vulnerability and an all too relatable loss. The band took their time to move through emotionally raw and gritty songs, connecting some to their own experiences and evoking the power of reflection in others.

The Summerland Tour of 2021 will take on more than an exciting mix of songs from the past that also continue to impact us today. This tour is a way to reinforce the critical need for music in our lives – whether to ease pain, lift our mood or lower our stress – as well as the importance of these opportunities to gather together again and feel alive.

Everclear:
Summerland
Everything to Everyone
Heroin Girl
Local God
Father of Mine
The Man Who Broke His Own Heart
Fire Maple Song
The Twistinside
Sunflowers
Wonderful
I Will Buy You a New Life
Encore:
So Much for the Afterglow
Santa Monica

Hoobastank:
Pieces
Out of Control
Inside of You
Running Away
Remember Me
Born to Lead
Same Direction
The Reason
Crawling in the Dark

St. Vincent Brings the Daddy’s Home Tour to the Egyptian Room and Wows the Crowd