Greenville, SC – After 20 albums and multiple reformations over three decades into their career, rock band Enuff Z’Nuff showed up to Greenville ready to impress. The band has been unceasing in their commitment to touring and it was clear that original member and singer/bassist Chip Z’Nuff, guitarist Tory Stoffregen, guitarist Alex Kane and drummer Daniel Benjamin Hill were still having a great time performing! Joining tonight’s line up was Pump 5, Shotgun Saints, and Arcane.

The evening brought in loyal fans who were ready to fly high like it was a “New Thing”. However, there was also a poetically tragic vibe in the air. Only days before Enuff Z’Nuff was scheduled to play at The Firmament, the venue owner publicly announced on the club’s Facebook page that the doors would be permanently closing the upcoming weekend. It would mean the sad loss of a gathering place for live music in the upstate and process of reflecting on many of the artists and shows that rocked the stage. Coincidentally, tonight would mean “Enuff Z’Nuff”, as the final farewell was underway with one of the last shows left at The Firmament.

The first leg of the Enuff Z’Nuff 30th Anniversary World Tour is well underway, although there is still time to catch an upcoming show! 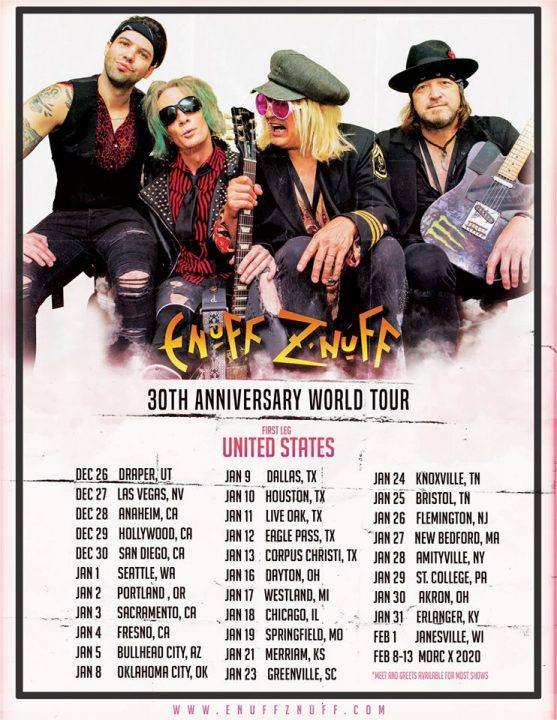 Enuff Z’Nuff – “Where Did You Go” (Official Music Video):

Photo Gallery: The Chicks Call It A Night At Ruoff Music Center