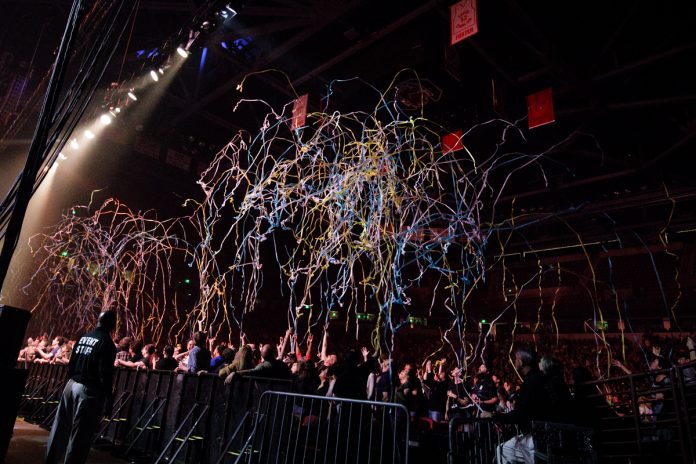 Columbia, SC – Colonial Life Arena hosted a packed house who were gathered for the two rock bands, Pixies & Weezer. The bands have teamed up again to hit the road for their Spring 2019 co-headlining arena tour. Special guest, Basement, was also in the house to offer support. The shared headlining arrangement allowed for both bands to perform extensive set lists, including tracks off their latest work and other previous albums.

When Pixies took to the stage, they played favorites such as, “Gouge Away”, “Here Comes Your Man”, “Monkey Gone To Heaven”, and “Where Is My Mind?”. Anticipating fans were also able to have their first chance to hear new Pixies music from an album forthcoming later this year. Pixies is Black Francis (lead vocals, rhythm guitar), David Lovering (drums, percussion), Joey Santiago (lead guitar, keyboards), and Paz Lenchantin (bass, violin, backing vocals). For more Pixies, check out their podcast series, “Past Is Prologue”, and get an inside view at the recording sessions.

Weezer began their set with an acapella version of “Buddy Holly” before the curtain dropped and the band went on to play favorites, “My Name Is Jonas”, “Undone – The Sweater Song”, “Beverly Hills”, and “Hash Pipe.” They also performed several covers: Jane’s Addiction “Up the Beach”, The Turtles “Happy Together”, A-Ha “Take On Me”, and the famed Toto “Africa”. Weezer is Rivers Cuomo (lead vocals, lead guitar), Patrick Wilson (drums, percussion), Brian Bell (rhythm guitar, keyboards), and Scott Shriner (bass, keyboards). For more Weezer, stream their new release, The Black Album, HERE.

Photo Gallery: The Chicks Call It A Night At Ruoff Music Center