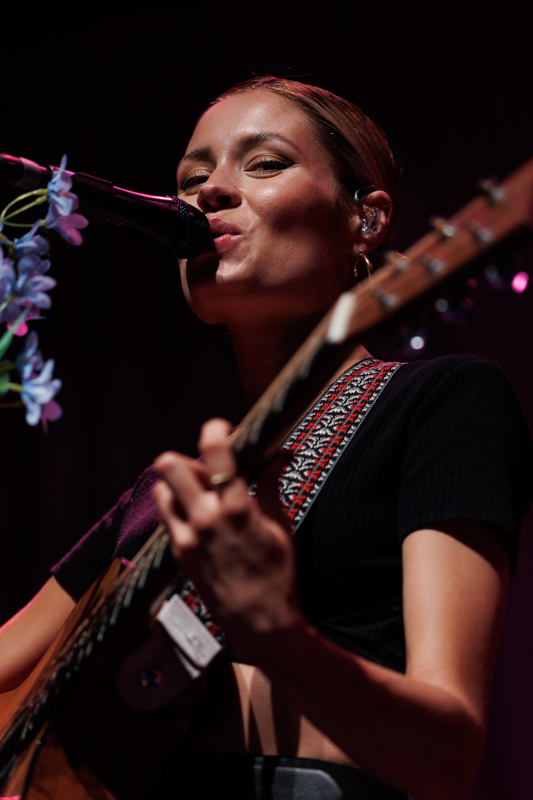 Silver Spring, MD – The Fillmore welcomed Scottish Singer and Songwriter Nina Nesbitt to the stage. Opening for James Arthur and playing to a packed house, Nesbitt played several new songs for the first time, including her latest single, Dinner Table. The crowd pressed tightly to the barrier, vying to get a good view of Nesbitt while she played the guitar, the piano, and sang. She was a crowd favorite with her distinctive vocals and retro-synth, bringing a fresh face to modern pop.

Nesbitt played a strong set, featuring new songs such as “When You Lose Someone” and “The Sun Will Come Up“, “The Seasons Will Change“. Also included were classics from her first two albums, Loyal to Me, Is It Really Me You’re Missing, and Colours of You. Nesbitt’s credits include two Top 40 Singles in the Scottish Albums and the UK Album Charts, both in 2014. Her second EP, The Apple Tree, reached #6 on the iTunes download chart in 2012.

Nina Nesbitt sprang to fame in 2011 after meeting musician Ed Sheeran at a radio gig he was performing at. After inviting her to play a song on his guitar, he followed up with an invitation to join him on his upcoming European tour as a support act. She has collaborated with many artists including Seeb on Sweet Dreams & Dynamite, as well as Deacon, NOTD, and R3HAB. Nesbitt headlined the Metaverse Festival along with deadmau5 and Paris Hilton. She was notably mentioned by Taylor Swift during her acceptance speech for the Women of the Decade Award at Billboard’s Women in Music Event. In 2021, Nina herself wins the Women in Music Award at the Scottish Music Awards.

Nina’s new song, “Dinner Table”, highlights the similarities and differences between herself, her mother, and her grandmother while in their mid-twenties. The music video is unique, and includes footage shot by Nesbitt while on a trip to Sweden tracing her family roots. The resulting video is intimate and enchanting, bringing the viewer into her life and family legacy.

Nina is currently working on her 3rd album.

The Fillmore Silver Spring opened in September of 2011, and features a 2000 person capacity. Located in downtown Silver Spring, Maryland, it offers state of the art sound and lighting systems, in addition to excellent drink and culinary options.