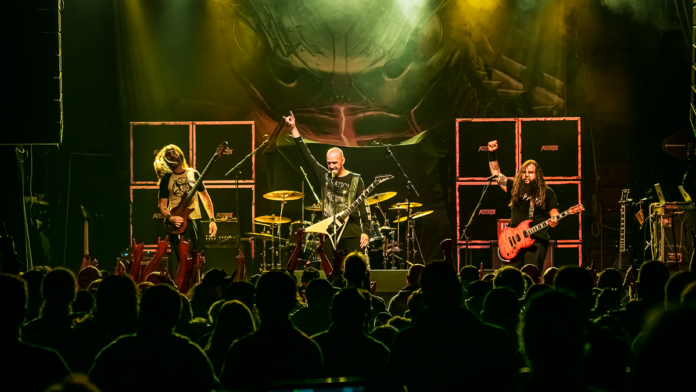 Toronto, Canada – Sunday night in Toronto. Another live music venue is packed. This time, it’s the Phoenix Concert Theatre. All the shows I have attended this year have been jammed, wall to wall with music fans. The Heavy Metal scene in Toronto is alive and well, and I’d wager that’s it’s thriving just as strongly around the rest of the world.

Tonight’s affair is a five band experience, all in support of German metal Gods ACCEPT. 4th on the bill is Fayetteville, North Carolina’s Narcotic Wasteland. Narcotic Wasteland originally started out as a side project for ex-Nile member Dallas Toler-Wade in 2014. Upon leaving  Nile in 2016, Dallas has focused more of his time on Narcotic Wasteland. In 2017 they released their 2nd album Delerium Tremens and are currently working on a new release slated for 2023.

The band starts this night with their opening track “Pharma Culture”. Donning an “Immolation” long sleeve Tee, Dallas Toler-Wade comes running out on stage to start the set. The song is their take on the problems with Big Pharma Industry, and their faults with the opioid epidemic over the past years. As their name suggests, it’s a common theme that drives the band’s content. As the track concludes, Dallas ensures to get the crowd riled up for the headliners as he screams out “Let’s hear it for Accept!!” It’s a clear indication of his humbleness and thankfulness for being on the tour.

Narcotic Wasteland is a Death Metal band, and their sound is classic fair. With speed, and growling, deep vocals it’s a sound I came to love in my teens. And we don’t only get it from the band’s frontman. We also get the same grating vocals from guitarist Brett Lee and drummer Joseph Howard as the band plows through their set, leaving no opportunity of rest for the crowd.

As if the crowd didn’t just have their asses handed to them, before the band wraps it up, Dallas makes sure that they are aware of what is to come. “ACCEPT IS GOING TO KICK YOUR FUCKING ASS! ARE YOU READY FOR THAT??? I CAN’T FUCKING HEAR YOU!!!!” and they blast into “You Will Die Alone”

The last track on this night for Narcotic Wasteland is “Introspective Nightmares” from their album Delerium Tremens. At the end of the track, the crowd gets a salute from the band, guitars and drum sticks raised high. Bassist Chris Corcione reels back and throws his bass forward. I can’t believe my eyes! He’s going to smash it against the stage…. and then he stops, and laughs. The little trickster!!!!

Unfortunately, with the number of bands on the bill, and a 6:00 pm start, the set was just too short. It leaves us feeling somehow cheated. Definitely out of the band’s control though. That said, Narcotic Wasteland took full advantage of the time allotted to them, and they played balls out, hard, heavy, fast and loud. Straight through their set with minimal chatter between songs.

I personally will be looking out for their own tour next year, after their pending 3rd release. I’m certain we’ll get a much longer look.