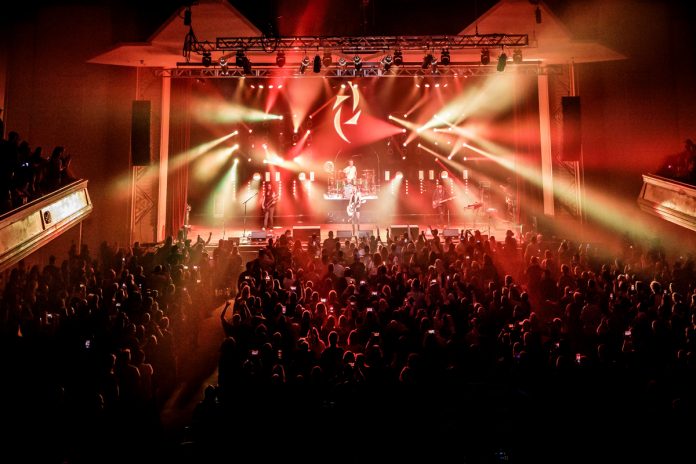 Asheville, NC – The crowd gathered at the Thomas Wolfe Auditorium on Wednesday, September 8th, were served up a powerful blend of East meets West, an evening that would work to maximize the strength of metal and affirm that music is a universal language. Halestorm has a big tour starting in November with Evanescence and The HU is embarking on their own headlining journey, but tonight the road would bring these two sensations together.

Kicking off the evening was global music warriors, The HU. They describe their style as Hunnu Rock, a fusion of traditional Mongolian music and contemporary rock. The band formed in 2016, went on to release a series of visually spectacular music videos, and have become an international success. Paying homage to essential parts of their culture, the band utilizes traditional Mongolian instruments, including Morin Khuur (horsehead fiddle), Tovshuur (three-stringed lute), and throat singing. Lyrics include ancestral Mongolian war cries and story-telling, encouraging audiences to chant alongside them “HU, HU, HU, HU!” Not stopping there, the band has taken on heavy metal icons, Metallica, by covering “Sad But True” and recent release “Through The Never” (from The Metallica Blacklist), in their own language and style. If you don’t already know you are a Hunnu Rock fan, The HU will seal the deal.

Enter Lzzy Hale (vocals, guitar, piano), Arejay Hale (drums, backing vocals), Joe Hottinger (guitar, backing vocals), and Josh Smith (bass, keyboards, backing vocals) – and the magnitude of stage presence was turned up to eleven. Lzzy warmly reminded the crowd that the first time Halestorm played in Asheville was March 3, 2009. Tonight this powerhouse of a band would not only bring back their sheer energy and passion, but the work of many hands also delivered exceptional lighting and sound!

Standing in six-inch platform heels, Lzzy is a phenomenal front-woman who can melt the house down while simultaneously creating a sense of adoring connection. Even the typically background-housed arrangement of the drummer seems to be tossed out, as Arejay is set on a riser that allows him to connect his own way with the audience, which includes the use of giant drumsticks during his solo. It’s clear this is a band who appreciates their fans and ensures the means to interact with the crowd during their show. Halestorm most certainly ROCKS!

Encore:
The Silence
Here’s to Us
Back From the Dead
I Miss the Misery

Official music video for “Song of Women” by The HU featuring Lzzy Hale of Halestorm:

JP Saxe and the Feelings Are Stupid Tour at the Historic Lincoln Theater in Washington, DC