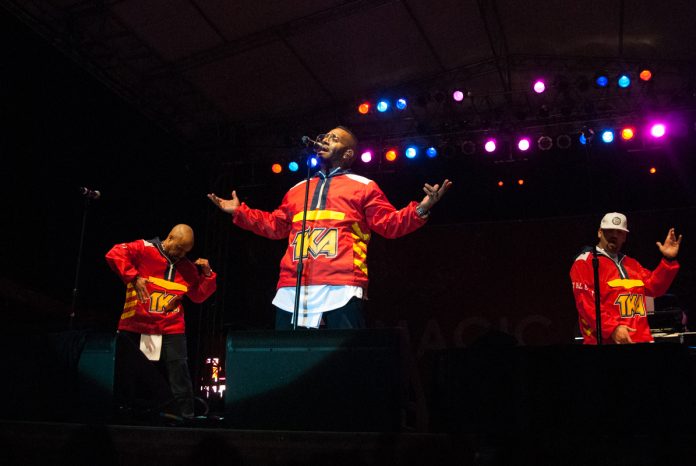 Miami, Fl – The Magic City Casino held the first Mega Mix Beer and Freestyle Music Festival on February 16, 2019.  The first of it’s kind event brings together craft beer artisans and connoisseurs with live freestyle dance music artists. This combination is a great formula to fill the seats at an outdoor Florida venue on a balmy spring Saturday evening.

The evening kicked off with Miami freestyle legend Debbie Deb. While her catalog of hits is not deep, the two songs she performed were staples on the Miami dance music scene since their recording in the mid 1980’s. Debbie Deb energized the crowd with her hits “Lookout Weekend” and “When I Hear Music”.


The evening continues to get hotter as the sun begins to set when freestyle diva, Cynthia, takes the stage. The crowd, now having sampled large quantities of craft beer, is warming up as well. Cynthia belted out her hits “Thief of Hearts”, “Endless Nights” and her first hit, “Change on Me”. As she completes her set, she teases the crowd by stating, “I’ll be back“, hinting of a possible duet with the next performer, Johnny O.


The sun has set. Night has fallen on South Florida and the temperature rises as Johnny O takes the stage. A South Florida resident, Johnny O performs locally often and packs the house every time. Saturday night was no exception. Johnny opened his set with a cover of the R&B disco classic, “I’ll Do Anything For You”. His set also included his mega hits “Highways of Love”, “We Can’t Go On This Way” and “Fantasy Girl”. The highlight of the Johnny O set was when, as teased by Cynthia, she joined Johnny on stage to perform their monster hit duet of Dreamboy/Dreamgirl.


For those fans of Hip Hop thrown in with their Freestyle, Rob Base was there to deliver.  Rob Base, his hype man, and DJ, had the crowd in a frenzy with his musical trip through a medley of classic Hip Hop hits. He performed “Joy and Pain” and ended his set with the dance floor powerhouse hit, “It Takes Two”.


The surprise of the evening, for me at least, was Taylor Dayne. It was no surprise that she was performing. She was on the list of performers. However, I was blown away by a) how great she looks and b) the awesome power of her voice, still today. Taylor took to the stage with back up dancers and opened with “Prove your Love”. Her set included “With Every Beat of My Heart”, “Love Will Bring You Back” and a Barry White cover of “Can’t Get Enough of Your Love”. The set was completed with her mega dance hit, “Tell it to my Heart”.


Last, but certainly not least, was TKA. K7 and the boys brought their New York freestyle groove the the Magic City Casino. They powered through many of their hits including “Scars of Love”, “Louder Than Love”, “Maria” and many others to end a great evening of freestyle music on the South Florida stars.


The Magic City Casino is on to something with this Beer Fest concept. Making this an annual or more frequent event could be a winner for the venue and the South Florida music scene. Let’s hope they bring this back again.

The World Returns to Richmond for Folk Festival 2021