Toronto, Ontario – Budweiser Stage was host to not only Nu-Metal veterans Korn, but also grunge gods Alice In Chains, who are out on their summer 2019 North America Tour.

Hailing from Seattle, Washington, Alice in Chains are no strangers to being on stage. Getting their start back in 1987, they continue to prevail with their signature low sounding drop D tuning, hypnotic vocals and guitar work from frontman William DuVall, Jerry Cantrell’s amazing lead guitar playing and backing vocals, mass drum beats and cymbal crashes from drummer Sean Kinney, and Mike Inez rocking the bass. The band is touring to support their latest release, Rainier Fog, from 2018.

Alice In Chains rocked the roaring crowd from the moment of opening the show with one of their biggest hits, “Angry Chair“, through a variety of songs spanning their 32-year career. Included in the set were fan favorites, “Them Bones”, “Man In The Box”, and “Rainier Fog”. When they played “Nutshell”, surprise guest Dallas Green joined them!

Restless anticipation, a few fitting words for the fans eagerly awaiting Korn to grace the stage. The band is trekking across North America in support of their 13th full length album The Nothing, due to be unleashed upon the world on September 13, 2019. For a sneak peak of the first track released, catch the official visualizer video for “Cold”.

Once the curtain finally dropped and Korn began to play, the crowd erupted with a roar that could be heard across the entire lake front. Starting their set with “Here To Stay” from the 2002 album Untouchables was a great way to pump the crowd up for the rest of their time here in Toronto. The night also included many other hits from their repertoire such as, “Blind” (a big time fan favorite sure to get a mosh pit going), “Got The Life”, “Freak On A Leash”, and one of the band’s biggest live songs for sure to inspire chaos in any mosh pit, the mixture of “Shoots And Ladders” and Metallica’s “One”. 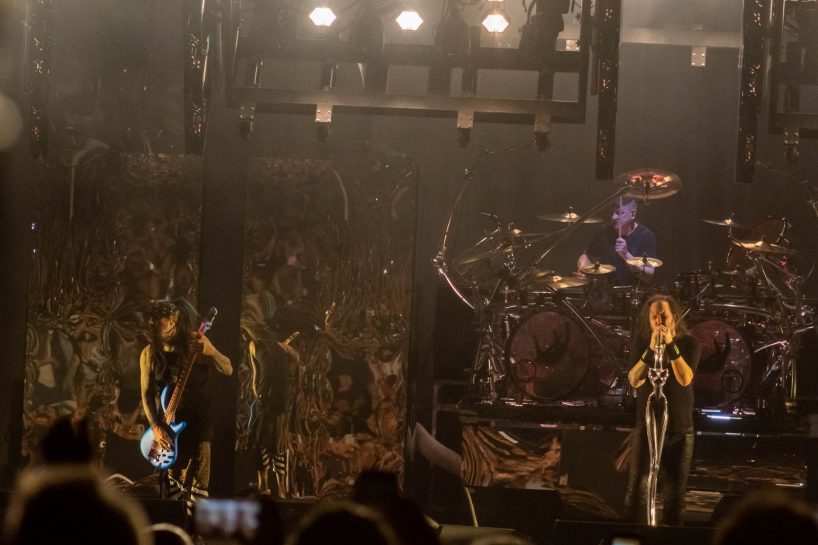 Korn – a band that has been around since 1993, playing across the world multiple times during their career, winning two Grammy Awards, and selling more than 40 million –  it’s no question as to why this band is HERE TO STAY! Go get tickets for this tour, you will not be disappointed.