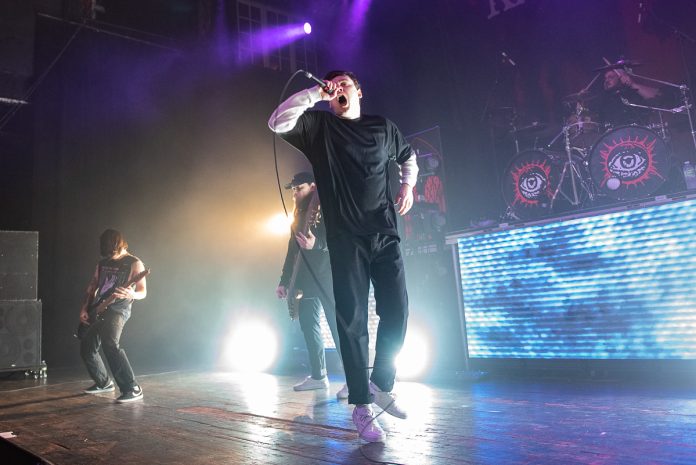 Orlando, FL – Mosh |mäSH |v. dance to rock music in a violent manner involving jumping up and down and deliberately colliding with other dancers; (see KNOCKED LOOSE)

OK. Maybe Knocked Loose haven’t made it to Webster’s quite yet, but a case could made for their inclusion under multiple entries, including hardcore music, beatdown and two-step. At the least their reputation as scene legends is secure, as proven Sunday night at the Orlando stop on the A Tear in the Fabric of Life tour.

The latest six-track EP and its accompanying animated film arrived in October 2021 and was hailed by critics as “heavy, tragic, powerful”. All six songs made an appearance on the setlist, albeit sprinkled in between other fan favorites. “Where Light Divides the Holler” opened the set, complete with the car crash sounds that establish the latest concept album. (The “holler” is a nod to the band’s roots in Oldham County, Kentucky.)

“Billy No Mates” was the first song to make an appearance off 2016’s Laugh Tracks and it instantly drew a reaction from the fans packed shoulder-to-shoulder in House of Blues. Part of Knocked Loose’s reputation is built on their genre-defying sound (the latest EP was inspired by death metal and Phil Spector). The other half is the ferocity of their mosh pits.

Frontman Bryan Garris wasted no time stirring up the crowd, his taunts and challenges flying like rocks into a hornet’s nest. When Garris took a breath, lead guitarist Isaac Hale took a turn agitating the crowd to form a circle pit and keep the energy going. (Hale also provides a fantastic low vocal counterpoint to Garris’ inimitable screech.) Orlando was happy to oblige, creating a Florida-appropriate hurricane of swinging fists and violent shoves on the floor.

What’s often ignored or overlooked to the uninitiated is the depth and power of the lyrics. Themes of loss and grief are woven through many of Knocked Loose’s songs, along with life experiences like cutting ties to toxic people. “Guided By the Moon” exposes domestic violence with lyrics like “I was visited by death again/an angel of the dark/come to take you home/in the shape, in the shape of a shattered heart.”  Synchronized headbanging and the adrenaline rush of (somewhat) safely going to battle in a crowd provide a cathartic release.

Tapping into life experiences and emotion is the bread-and-butter of second-billing band Movements. Presumably there are close ties between Knocked Loose and Movements, because the juxtaposition between the fire of Knocked Loose and the cool blue of Movements seemed odd to this reviewer. Movements is certainly a strong band in their own right, with a post-emo sound akin to Balance and Composure with maybe a dash of The National and mewithoutYou. The crowd loved them, passionately singing along to tracks like “Seneca” and “Colorblind.” It was just an odd transition between the last song of their set, “Daylily” with its references to “pink cloud summer” and Knocked Loose’s opening song with “sundered from your spirit lays your body.”

More in line with Knocked Loose’s brand of hardcore was Kublai Khan, another huge crowd favorite. While Knocked Loose takes a more hybrid approach to hardcore and beatdown, Kublai Khan is straightforward about its promise to knock you down. There’s a sparseness in their music that gives each element a chance to shine. Matt Honeycutt’s growls are a show stealer, but the real star are basslines strong enough to shake your fillings, courtesy of Eric English.

Working the crowd into a frenzy was KOYO, out on their first national tour from their native Long Island. The mark of a truly great band opening for the openers is the amount of energy they put into their performance. KOYO played like the headliner they will no doubt be with a couple years more of hard work.