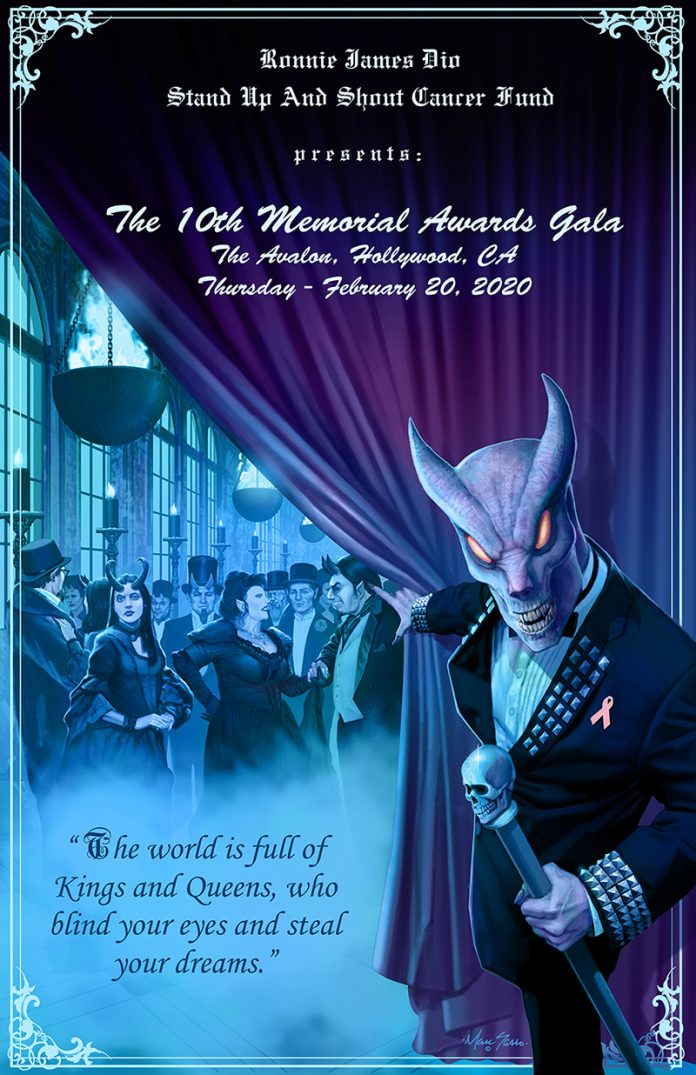 Hollywood, CA— Heavy metal icon Ronnie James Dio lost his battle with cancer 10 years ago, but as metal music fans know, his spirit and music live on. That legacy was very much alive at the 10th Memorial Awards Gala for the Ronnie James Dio Stand Up and Shout Cancer Fund, held at the Avalon in Hollywood, CA on Thursday, February 20, 2020. The event was a celebration of Dio’s life and music, as well as a celebration of the work and progress that the cancer fund has made in the last 10 years.

The gala, which included a dinner, silent auction, and live music, honored the cancer fund supporters with a variety of awards. Prior to the awards presentation, rock and roll band Sadie and the Tribe got the evening going with their uplifting set.

The gala then moved into the awards ceremony, which was hosted by metal radio legend Eddie Trunk. Honorees were introduced by a who’s who of heavy metal, including Sebastian Bach, Glen Hughes, Frankie Banali, Jeff Pilson, and Fred Coury.

While all of the honorees and presenters focused on the need for cancer prevention and research, one of the most moving moments of the evening was when presenter Frankie Banali shared his personal ongoing battle with Stage 4 pancreatic cancer.

Banali, who is beating the odds despite his prognosis, implored the audience to get regular check-ups and cancer screenings.

After a portion of the awards were presented, the attendees were treated to visuals and vocals of Dio himself with band members Simon Wright, Craig Goldy, Scott Warren, and Bjorn Englen. Tim Ripper Owens and Oni Logan were featured vocalists.

To round out the evening, comedian Brian Posehn performed a song for his upcoming album Grandpa Metal with Armored Saints and Fates Warning bassist Joey Vera and guitarist Scott Ian from Anthrax.

Below is a full list of the award winners from the gala:

BREAK THE BARRIERS To End the Stigma Around Mental Health

Richmond Ballet Brings a New Look to The Nutcracker