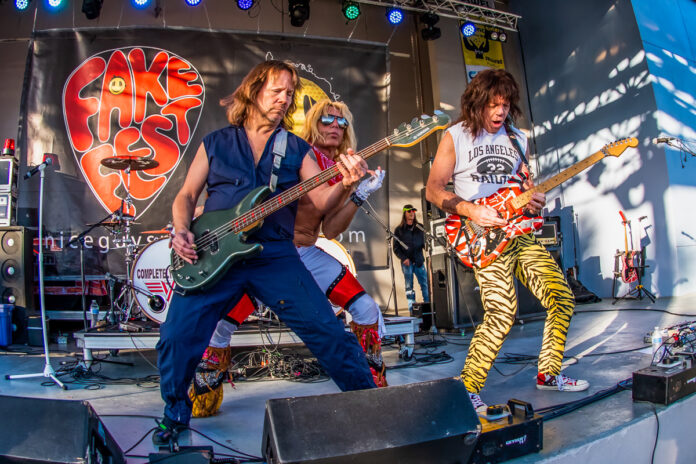 Fort Myers, Fl – It’s January 14, 2023, the coldest day thus far in 2023 and The Alliance for the Arts in Fort Myers, Fl hosts the first ever Fake Fest. The event, featuring a collection of great tribute bands and beer from local and regional breweries within Fl, gives a region hard hit by Hurricane Ian a great respite from the recovery process and provides just a good ol’ time enjoying music, beer and fun.

Whether you are a baby boomer, gen X’r, millennial or gen Z, there is something for everyone at Fake Fest. The line up features national tribute bands including Nightrain, a Guns and Roses tribute band kicking off the tribute band barrage. Slippery When Wet, a Bon Jovi tribute band follows bringing some fans to their feet and encouraging the sing alongs.

For the millennial crowd, Nirvanna, a Nirvana tribute band takes the stage next.  These three guys do a superb job of portraying the mannerisms of the real Nirvana, including some comical quips, and ultimately trashing their stage when the set was over.

As the afternoon progresses and the temperature begins to dip back into the low 50’s /upper 40’s (not a big deal up north, but keep in mind, this is Southwest Florida!) Rhymin’ and Stealin’, a Beastie Boys tributeband, takes the stage. A harsh contrast to the music that precedes them at Fake Fest, Rhymin’ and Stealin’ proceeds to bring the crowd to their feet and bum-rushing the stage. The crowd demographics spanned quite the generational gap yet all seemed to rap along, word for word with Rhymin’ and Stealin’. The set opens with “Brass Monkey” and comes to a spectacular end with their mega-hit, “Paul Revere”.

The sun has now set and the crowd is energized as Badfish, a Sublime tribute band, jams. They open with the ever so popular, “Smoke 2 Joints“. Apparently the crowd seemed  to accept this as a direct order as it wasn’t very long before a distinct odor filled the chilly evening air and a cloud of smoke hovers over them. Badfish goes on to play through what is an endless list of Sublime favorites before wrapping it up with “Wrong Way“.

Well, the fans attending the first Fake Fest wanted the best and they got the next best thing, which was the Kiss tribute band, Kiss Alive. In full make-up and costume, Kiss Alive takes the stage after the iconic intro of “You wanted the best, you got the best” by their road tech and opening with “Detroit Rock City”. Kiss Alive plays through a list of Kiss favorites before wrapping up the evening and a full day of kick-ass rock n roll with the quintessential anthem, “Rock and Roll All Night”.