Washington D.C. – Now I lay me down to sleep, dreams of metal my soul to keep! If I should dream while I’m awake, it must be Dream Theater for heaven’s sake!

When Dream Theater brought their iconic progressive metal sound to the Warner Theater on March 6, 2022, they took the nearly sold out crowd on a memorable, out of this world journey that dreams are made of.

I must admit, I chose not to delve deeply into their history and decided to go in cold. Yes, I did listen to some of the music and was intrigued by their… well… dreamlike sound. I heard a blend of electric metal with some electronic instrumentation as well. The Rush influence was very noticeable. What really caught my ear were the numerous key, tempo, and time signature changes that made for songs that took you on a melodic journey… almost to the top of the world and back.

As we stood in line to enter the Warner, the first thing I noticed was the diverse fan base, ranging in age from teens to those of us born at a much safer distance from the Apocalypse, such as myself. What was even more interesting was the diverse array of attire, ranging from Avatar or Rush t-shirts to a bit more formal dress. It was obvious their fans came from all walks of life. The Warner staff was awesome and very friendly. One of the security checkpoint staff, went as far as to request everyone share a little ‘boogy woogy’ with him on their way out, so he would be be able to take in the show.

The evening opened with the perfect supporting act for Dream Theater, Arch Echo. The heavy metal / fusion instrumental band, consists of Adam Rafowitz (guitar), Joey Izzo (keys), Joe Calderone (bass), Adam Bentley (guitar), and Richie Martinez (drums). Filling in wonderfully for Richie was Caeden Breneman. I had the opportunity to speak with Caeden’s proud father who flew all the way from TX to DC to catch his son’s performance. The band set up the night with a 30-minute hard pounding set with a powerful light show. Pay attention to these guys, they are going places!! Their melodic instrumentals were a great setup for the journey that was to come when Dream Theater took the stage.

Dream Theater – James LaBrie (vocals), John Petrucci (guitar), Jordan Rudess (keys), John Myung (bass), and Mike Mangini (drums) – took to the stage, one by one, during the video intro to “The Alien” from their newest album, A View from the Top of the World. The powerful instrumentals were highlighted by a well-choreographed video background.

Transitioning to “6:00“, with a little funkier, bassier, sound, LaBrie nailed the vocals with a raspier tone. As they went into their next tune, “Awaken the Master“, I realized how well choreographed the music was with the video in the background. Again, the transitions were phenomenal and the music told the story while LaBrie’s voice had a very instrumental feel. Combined with the video, we were all treated to a multi-sensory dreamlike trip to the top of the world!

James took a moment to talk about the uncertainty they felt when resuming their touring ways in a somewhat post-COVID world. Adding a bit of comic relief to the night, a fan yelled, “We love you!” which took LaBrie by surprise and got a nice reaction from the crowd. All in all LaBrie was amazed at the number of people who have been attending their shows and gave the audience a heartfelt thank you!

When they announced “Invisible Monster” as the next piece, the audience cheered. From the first note (and video on the screen), there was a noticeable sea of bobbing heads as the audience stood at their seats. Throughout the last few songs the audience would clap, cheer, and even sing along from time to time. The fan loyalty was very obvious and fun to watch! 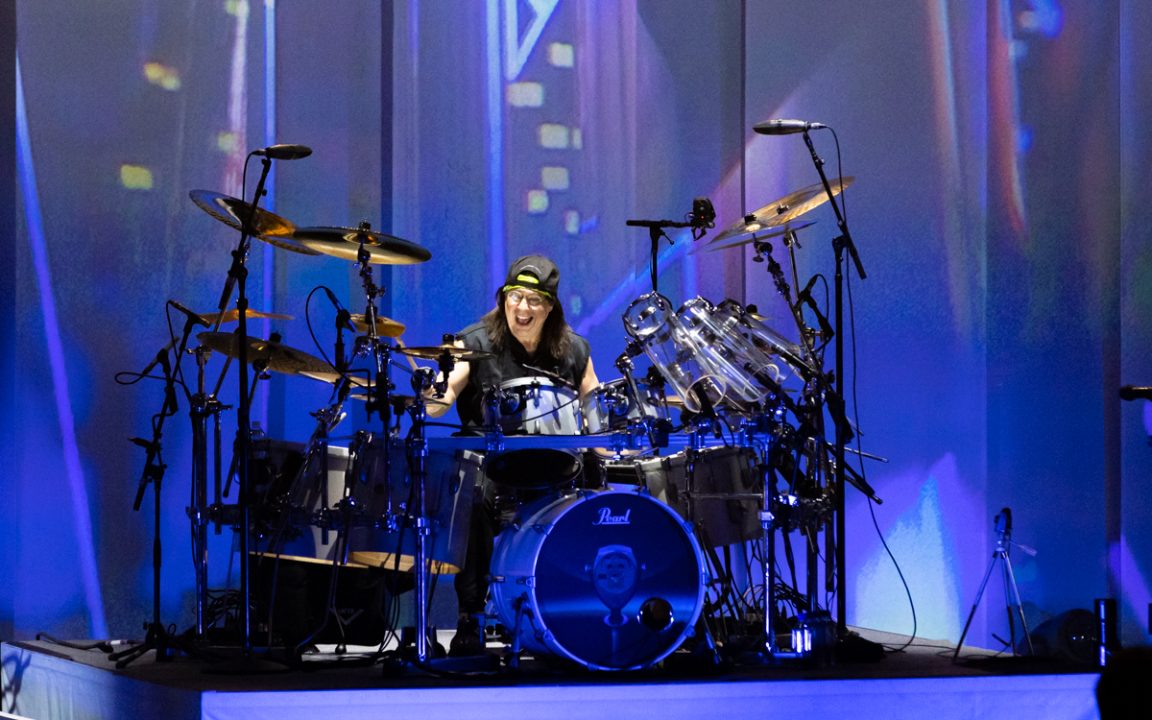 After a few more songs, with an abundance of solos and jams, darkness fell upon the stage and the video for the last piece, “A View from the Top of the World“, played on the background. Again, the video in conjunction with the music, key and signature changes, took us on the final journey… at least the journey that led us to the standing O that brought them back for one final song, “The Count of Tuscany“. Of all the songs of the night, Tuscany was, in my opinion, the most complex piece. I was floored by their musical precision in this piece. They played it flawlessly.

As we left for the night and went our separate ways one thing was certain. Indeed, we had been taken on a once in a lifetime musical journey, to the top of the world and back.

The Alien
6:00
Awaken the Master
Endless Sacrifice
Bridges in the Sky
Invisible Monster
About to Crash
The Ministry of Lost Souls
A View From the Top of the World

Encore:
The Count of Tuscany

Want to see more? Check out this Dream Theater video!