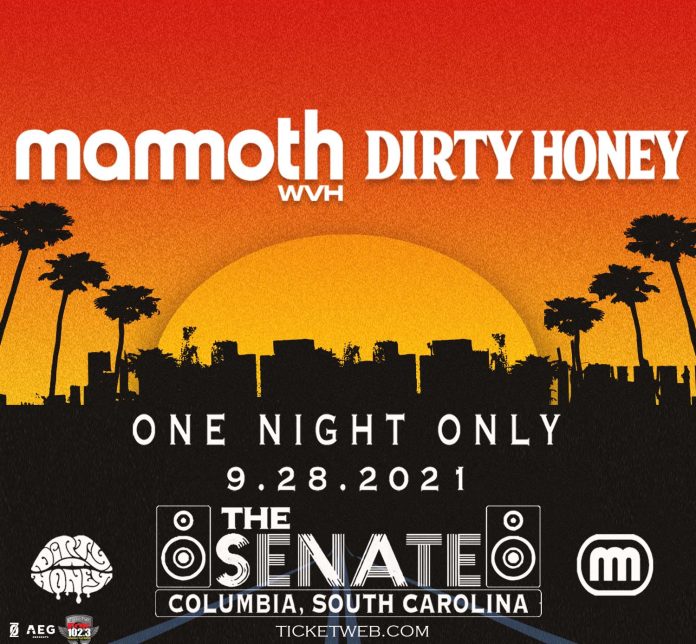 Columbia, SC – For one night only, two dynamic powers of rock converged at The Senate to light up the night and leave a lasting impression on the crowd. Wolfgang Van Halen (Mammoth WVH) has been out on on tour with Guns N’ Roses and Dirty Honey recently wrapped up their summer tour supporting The Black Crowes – taking a special evening  for a quick but plentiful visit to the Midlands.

“The name Mammoth is really special to me.” says Wolf. “Not only was it the name of Van Halen before it became Van Halen, but my father was also the lead singer. Ever since my dad told me this, I always thought that when I grew up, I’d call my own band Mammoth, because I loved the name so much. I’m so thankful that my father was able to listen to, and enjoy the music I made. Nothing made me happier than seeing how proud he was that I was continuing the family legacy.”

Wolfgang Van Halen is a songwriter, vocalist, and multi-instrumentalist who demonstrates the ability to embrace his musical influences to develop his own sound, a debut collection filled with depth of emotion and courage to break from expectations. Mammoth WVH is the self-titled debut studio album released in June 2021 and the band delivered all the best of their technical riffs, hooks, and distinct perspective. Taking a moment from working through the setlist, the members of the band were each introduced until closing, “…and I am Wolf”, which caused the audience to roar in delight. WVH is a talented musician who may be navigating the echoes of legacy and strength of individualism, although one fact was clear, his efforts were adored by the crowd that filled the venue.

Blasting onto the stage next were the fast-rising, no nonsense rockers, Marc LaBelle (vocals), John Notto (guitar), Justin Smolian (bass) and Corey Coverstone (drums). An incredible band to take in live, Dirty Honey delivered an upbeat, fever-spiking set which reinforced why they are described as power-driving rock-n-roll through their enormous riffs and hooks. Moving like thunder through their setlist, the band sent shockwaves through the venue and comfortably positioned their soulful and sexy sound into the ears and hearts of the crowd.

Describing Dirty Honey as “ambitious” may be an understatement, as their chart-topping and stage-rocking efforts have been done as an independent, unsigned band, with NO major label support. Dirty Honey released its self-titled debut album in April 2021. This is a band that knows – when they push through tough times, the results are worthwhile.

“When you finally come through on those moments, that’s where the real magic comes in,” Notto says. “What makes all of our songs fun to play and listen to is we don’t allow ourselves to stop short of getting the best possible results out of each one of them.”