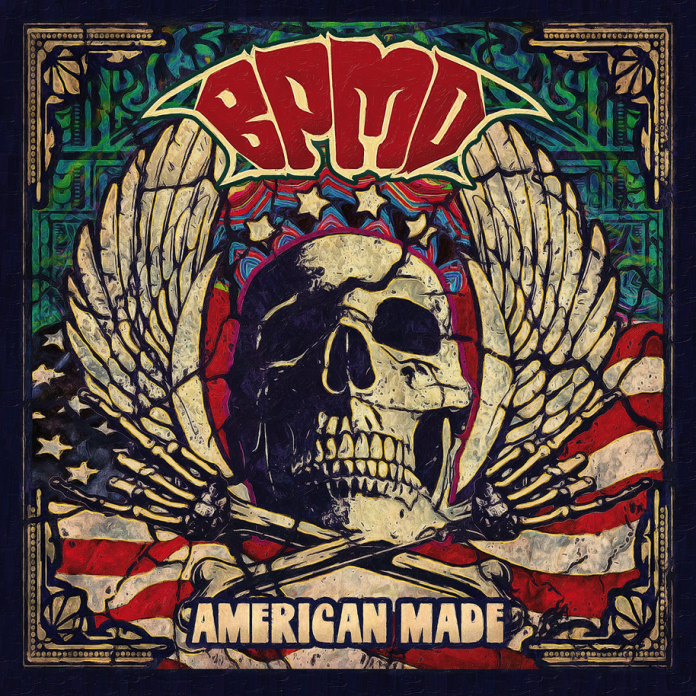 In speaking about the album and covering the song “We’re An American Band”, bassist Mark Menghi says, “The goal of American Made was, and is, to pay tribute to some of the great music of the ’70s, in particular, American music from the 70’s. We love music from all over the world; England, Germany, Brazil, Canada, Australia, etc… but at the end of the day, we are an American band, so it made sense to pay tribute to one of the greatest American bands of the ’70s by covering one of the greatest songs of that decade by the mighty Grand Funk…Being that this song was originally written about being on tour, we’ve been reminiscing about days on the road and how much we miss our fans! Touring is the lifeblood of most bands – we can’t wait to perform some shows and play these BPMD tunes, and see music flourish in a live setting once again.”

Bobby Blitz added, “American Band, in my opinion was the icing on the cake for this project. The idea of American Made, the 70’s called for it. The song was iconic then and truly stood the test of time. The call and answer between my vox and Phil’s guitar on the outro make the track that much more special.”

It’s evident within the initial seconds of BPMD’s American Made, as the legendary Bobby Blitz chants the introductory lyrics to Ted Nugent’s “Wang Dang Sweet Poontang” in his signature skyscraper-high howl, that he and his equally iconic bandmates are here to have a damn good time. The album features 10 unforgettable rock classics that have been reimagined as heavy banger. Tracks such as the raucous “Toys in the Attic” (Aerosmith) and rager-ready “Beer Drinkers & Hell Raisers” (ZZ Top) prove that BPMD not only manages to capture the essence of each original track on the album, but skillfully transforms each classic into an unforgettable metallic anthem for a new age. The seasoned quartet flex their musical muscles on renowned classics such as “Saturday Night Special” (Lynyrd Skynyrd), “We’re an American Band” (Grand Funk Railroad) and “Walk Away” (James Gang), and introduce a whole new heavy generation to deeper cuts like blues standard “Evil” (Cactus/Willie Dixon) and “Never In My Life” (Mountain). Channeling nostalgia while maintaining a fresh attitude, American Made is a summer soundtrack for all ages.

After initially drawing inspiration from his son to start a classic rock covers project, bassist Mark Menghi connected with the members of BPMD, who then came together at Mike Portnoy’s home studio in Pennsylvania to lay down the tracks in just one day. Since the whole concept of the band was born the night Menghi was listening to “Saturday Night Special”, BPMD were determined to record the song for the album. Beyond that, each individual musician picked two ’70s rock tracks, then collectively made another two shared choices.

American Made was produced by Bobby Blitz, Mike Portnoy, Mark Menghi and Phil Demmel while Mark Lewis of MRL Studios handled the mixing and mastering. The album’s cover artwork was created by renowned artist Marcelo Vasco who has also been known for his album art for Slayer, Metal Allegiance, Soulfly and Hatebreed.

American Made will be released on June 12th.