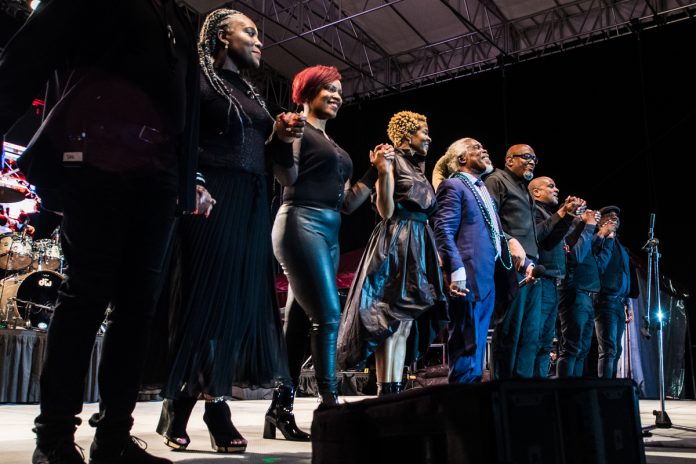 Miami, FL – A cooler than usual Saturday night was warmed by the smooth vocals of the legendary Billy Ocean and the reggae swagger of Toots and the Maytals on February 22, 2020 at the Magic City Casino in Miami, FL. Neither the threat of rain nor a dip in the temperature could keep fans away from the Magic City Casino.

The age demographics, spanning decades, similar to the careers of these two musical powerhouses, was a sight to see. It is incredible that you have Baby Boomers, GenX, GenZ and Millennials all enjoying the evening entertainment.

The wind was blowing as Billy Ocean took the stage. He kicked off his set with soft, jazzy “Love Zone”. It wouldn’t be long before the skies opened up. The rain, a minor inconvenience, was no deterrent to those who came to see Billy Ocean. Umbrellas, ponchos or no cover at all, fans stood fast to their premium seating and enjoyed the melodic tunes of Billy Ocean. It’s as time had not passed, his voice hasn’t diminished over the years. The only clear indication of the decades behind is a full head of white hair. Other than that, Billy sounds as good today as he did in 1981, when he released “Stay the Night“. Billy Ocean went on to perform for 75 minutes.

After a short intermission, the evening’s headliner, Toots and the Maytals, took the stage. “Pressure Drop” brings fans to their feet immediately.

Toots Hibbert, the pioneer of reggae music, wastes no time in hyping up the audience. In addition to “Pressure Drop“, the set also includes other timeless hits as “Do the Reggay”,  and “Funky Kingston“. It was obvious that those on the lower spectrum of the age gauge were not even born when Toots and the Maytals began changing the musical landscape with their “new” reggae sound. However, it is apparent that the college life may have a lot to do with their knowledge of and love for Toots and the Maytals.

Both artists delivered fantastic sets with fans dancing and singing along, sometimes all alone for impromptu acapella choruses of their favorite songs. The Magic City Casino continues to bring world-class entertainment to the South Florida area. Before their current season is over, they will have a great lineup of classic rock bands that include George Thorogood and the Destroyers, War, Rick Springfield and Grand Funk Railroad.

Photo Gallery Toots and the Maytals