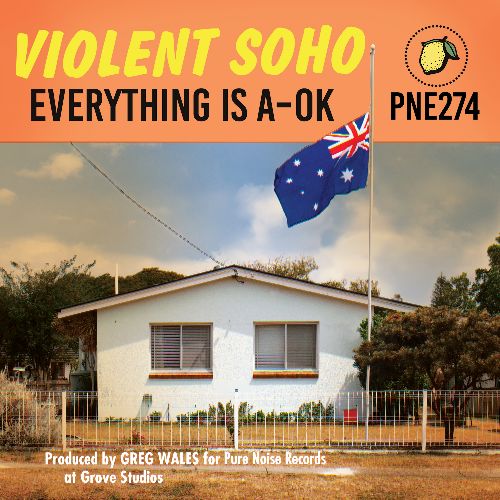 Brisbane’s own Violent Soho have released their 4th, and latest, single from their forthcoming studio album Everything Is A-OK due out 3rd April, 2020 via their new label, Pure Noise Records.

Regarding the making of their recent video, vocalist/guitarist Luke Boerdam shares, “We came up with the idea joking around – at some point every band member has actually “door-knocked,” so we thought it’d be funny to take our record door to door. It feels like there’s such a big disconnect with how we interact with music these days so it was pretty rad to actually play in some people’s houses. I was surprised we didn’t get more slammed doors in our face! Probably the most fun film clip we’ve ever made.”

In talking about their 5th studio release, Boerdam continued, “It’s honest. “It doesn’t claim to be anything it’s not: it’s apolitical, slacker, cynical, and trying to connect with people over a shared experience in pointing out society’s failures and the personal shit that follows.”

“Pick It Up Again” follows the previous releases of singles from Everything Is A-OK which includes “A-OK,” “Vacation Forever,” and “Lying On The Floor.” Additionally, Violent Soho will be playing four shows in late-April in support of the album. The tour will be hitting Amsterdam, London, New York, and Los Angeles.