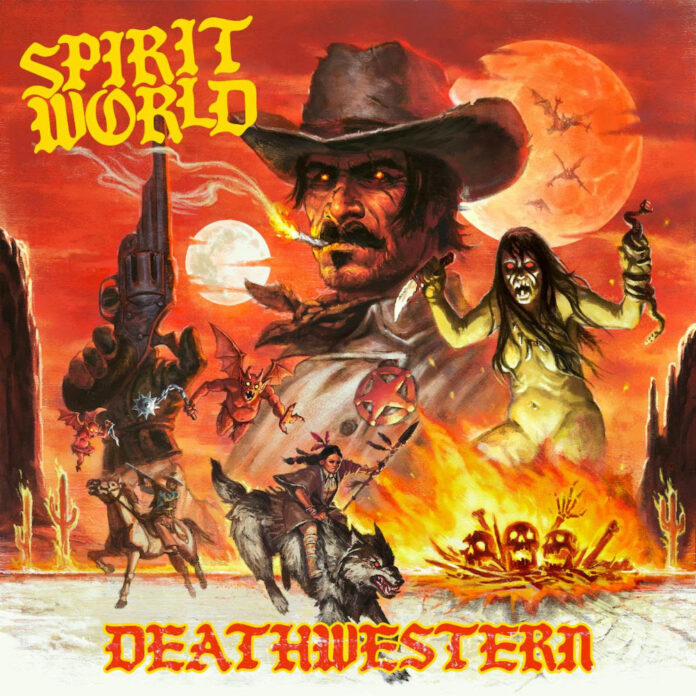 In the midst of a Global Pandemic, the world saw the birth of Las Vegas, Nevada’s Spiritworld as they released their first full length album Pagan Rhythms in 2020. This insanely intense debut, that founder Stu Folsom refers to as the soundtrack to his Death Western, had gained some well-deserved attention. During his attempts to author a collection of Horror/Western short stories for his book “Godlessness”, the multi-faceted Folsom found himself pulled away into the writing of the follow up to Spiritworld’s debut. The writing morphs the story of the first album, the short stories, and now the band’s new release, the aptly titled Deathwestern. The result is that the new record is going to smash your face in. With it’s classic 80s/early 90s thrash metal aggression and speed, and the guttural, abrasive vocals that are very reminiscent of the Industrial bands of the 90s, Spiritworld brings back a sound that is sorely missing in the metal scene today.

This ride through America’s imagined apocalyptic West, opens with the track “Mojave Bloodlust”. I literally feel like I am riding through the dessert in a Tarantino flick, but a minute three later, BAM! I’m kicked in the guts as the title track “DEATHWESTERN” kicks in. Thus, the real ride begins. Strap yourselves in! With its brutal lyrics, and edge-cutting leads and riffs, it’s going to be a hellish trip.

With the majority of the tracks on this album clocking in at under 4 minutes, there is little to no time for cute and cozy musical interludes, or long drawn-out melodic rhythms. Most of these songs come in hard and heavy, and they end as if you have literally run headfirst into a brick shit-house. There are not very many fade-outs. The album simply does not give you a moment to breath. At least not until “The Heretic Butcher”. At 5:11, it’s the longest track on the album that actually opens quite light and airy. Perhaps I’ve been dreaming for the previous 18 minutes. I’m taken back and I’m listening to some Sunday morning folk music. Alas, 40 seconds later and I snap back to reality. The song comes as a heater, not unlike the previous 5 tracks. At it’s crescendo, we get a fiery guitar solo AND STOP! The album’s layout of intense hardcore metal continues.

The album’s first single “Moonlight Torture” appears as the 8th track. This one features hardcore punk band Integrity’s Dwid Hellion. You can definitely hear the punk vocalists’ influences on this one, and it just adds another layer to the whole album’s unwavering, unrelenting, ear busting goodness.

A final “break” in the extreme action comes during the intro to the last track, “1000 DEATHS”. An acoustic guitar is picked and strummed. It’s a light melody. Horses are heard neighing in the background, similar to Bathory’s “Oden’s Ride Over Nordland”. Like the previous break, it doesn’t last long. 36 seconds to be precise, before we’re treated to a final 3:20 of head splitting metal.

The influences on this album are clear. Its little tidbits of sound bites, and movie quote samples feel like an homage to Rob Zombie. Its drums, guitar riffs and leads, have Slayer written all over them and at a total run time of 36:14, I’m fondly reminded of Reign in Blood. A blistering ~half hour of straight up, in your face, fastest, heaviest shit I’ve heard in a very long time. It all bodes extremely well for a fantastic journey. A lot of bands try a little too hard to bring a completely different sound. Usually, it doesn’t work for me. In this case, I’m getting a sound that I immediately loved when I first heard it back in 1986, yet something I haven’t heard from any new bands in a long time. Thanks for the ride Spiritworld!!