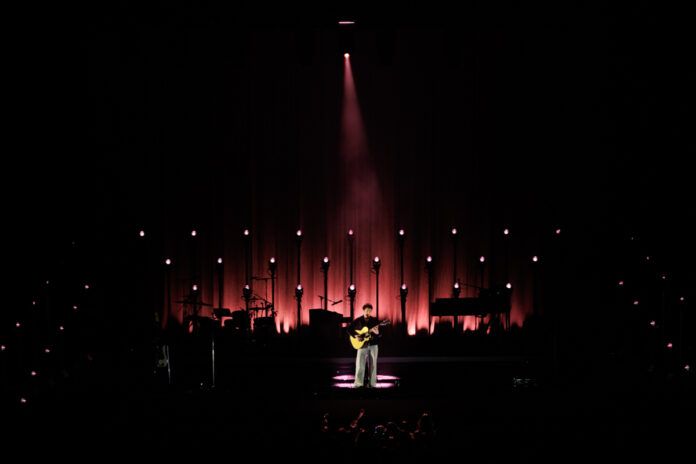 Washington, DC – The Anthem welcomed Alec Benjamin for a highly anticipated show. Benjamin was accompanied by openers Claire Rosinkranz and Madeline the Person. The DC show was the 11th show of the 2022 North American leg of the (Un)Commentary Tour.

The show had the crowd energized and on their feet, with Benjamin showcasing his distinctive Indie-Folk Pop style. Complete with a new 2022 album release of (Un)Commentary, the show was a classic mix of old favorites and fresh tunes. Alec Benjamin’s music acknowledges many of the gritty issues teens are dealing with, while adding an optimistic message of hope.

The (Un)Commentary Tour has a solid 18 song set list, including favorites like “Mind is a Prison,” and “Boy in the Bubble,” in addition to new songs from his recently released junior album. The full crowd knew every word Benjamin’s songs, singing enthusiastically along with every verse. Some of the music from the new album included “Older,” “Devil Doesn’t Bargain,” and “Dopamine Addict.” The stage was designed simply for the show, featuring elevated light stands surrounding the main platform. While many songs were performed with the full band, Benjamin played several quieter ballads alone on stage. Midway through the set, Alec and his band members moved to the front of the stage and performed several songs grouped together. The audience was enthralled with this more intimate setting. The lighting throughout the show was terrific, but the design was absolutely stunning at the end when the show closed out with rainbow lighting covering the stage.

Alec Benjamin is an American pop-singer from Arizona. He broke into the music scene in the late 2010’s with “Let Me Down Slowly,” which went multi-platinum. Alec followed this with a steady release of music in the years that followed, including many singles and three full albums. His appearance on The Late Late Show with James Cordon in early 2019 boosted his exposure and following. The Anthem is a local music venue located in the Southwest Waterfront neighborhood of Washington, DC. It opened its doors on October 12th, 2017 with a headlining performance by the Foo Fighters. The Anthem is operated by I.M.P., the same concert promotion and production company that owns the historic 9:30 Club also in DC. The Anthem is located in The Wharf, a newer development stretching along the Potomac River that features restaurants, stores, businesses, and residences.