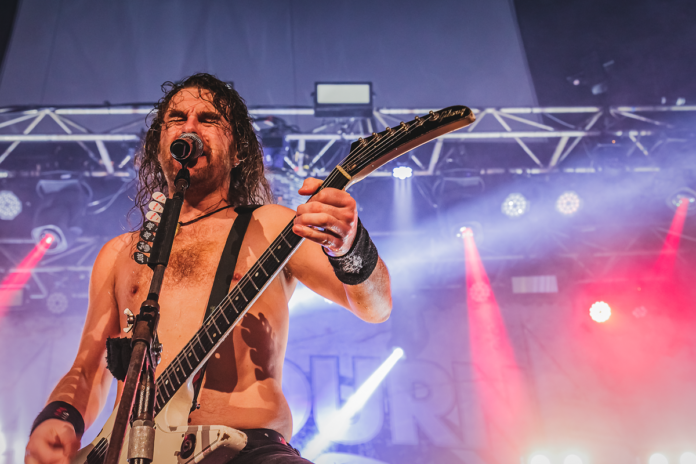 Toronto, Canada – Hold onto your britches!!!! On September 20, I packed my trusty camera equipment and headed downtown to Toronto’s The Opera House to shoot a highly anticipated show featuring the band Airbourne. Upon arrival, I quickly found out that I’m not the only one excited about this one. In 2019, the Aussie Rockers released their most recent album Boneshaker and, well, we all know what happened in 2020 and 2021. As such, their tour had been delayed until now.

What’s interesting to me here is that these guys have a cult like following. I typically like to arrive early to a shoot, or even a personal concert. It gives me an opportunity to chill, and chat, and this night was no different. I struck up conversation with a few of the fans as they anxiously awaited the evening’s festivities. They were completely gassed with excitement for this one. Many have seen this band time and time again, and some were even following the band to the next Canadian city of the tour. This piqued my interest even more and now I was anxious to find out what gives! After a completely awesome opening act in The Native Howl (a Michigan based Thrash Grass band), the house lights went out. It was 2105 hours (that’s 9:05 pm for my girlfriend who can’t stand my 24 hour “army” time). The spotlights dance around, projecting their yellow hue around the stage and out into the crowd. The intro to their opening track “Ready to Rock” is heard, and 30 seconds in, Airbourne comes bursting onto the stage. The shirtless lead singer Joel O’Keeffe heads front stage, bangs his head, and covers me in a mist of liquid from his soaking wet locks. What an entrance! The band was definitely ready to rock, and the fans were right alongside them! During their 3rd track of the evening, Joel O’Keeffe climbs onto a roadie’s shoulders at the stage, and they head on out to the madness that is ensuing in the crowd. O’Keeffe shreds his ax, and I quickly hop onto the security barrier steps to get a clear snap of the action. The Airbourne frontman is then handed a tall can of beer, shakes it up, and starts spraying it everywhere. Personally, I didn’t quite escape this shower, and this was only the 3rd song into their set. There was a lot more to come.

Frequently, during the band’s intense, hard hitting, hard rocking set, the lead singer/guitarist made sure nobody was leaving thirsty, and/or dry as he sprayed, and threw beer filled cups out into the crowd. These Australians are bringing the party to Toronto. They clearly wanted to make sure everybody was partying with them, and the crowd completely ate it up.

Each band brings their own musicianship, style, and work ethic, but the AC/DC influence here is strong. By looking around the crowd, I could see that the fans are completely aware of the similarities as many of them are donning AC/DC t-shirts. The AC/DC comparisons don’t stop at the music either. Joel O’Keeffe was a fireball, jumping and running around, non-stop, all night… not unlike one named Angus Young. Want another? As the bass vibrated through my body, despite my noise cancelling ear plugs, the Marshall Amp stacks surrounding the band on stage blasted out the sound. It was loud as hell!! It’s hard for anybody not to be a fan of AC/DC, so there is certainly no reason why Airbourne wouldn’t allow some of their fellow countrymen’s influence to affect their music. The difference here? Airbourne kicks it up to 11! Another influence for Airbourne, not unlike hundreds of other bands on the planet, is Lemmy Kilmeister and Motorhead. Everybody has a Lemmy story. It’ a clear indication of his character. I’ve heard a ton of stories about Lemmy’s influence, and his personable nature, and O’Keeffe is no different. So much so, that Airbourne wrote a song, for Lemmy and Motorhead. The song is called “It’s All For Rock n Roll” from their 4th studio album Breakin’ Outta Hell and it’s the 8th track from their set in Toronto. After this dedication, the band wheels out a case adorned with a Motorhead logo. Atop the case is 4 cups, a bottle of Jack Daniels, and a few cans of Coca-Cola. The southern elixir is poured graciously into the cups, and topped off with the cola mix, and the band pays one last tribute to the Rock God himself! “Cheers to Lemmy”, and the crown chants “LEMMY, LEMMY, LEMMY”. And of course, the good-natured gentlemen of the band onstage don’t want their faithful to miss out on the fun. Let the drinking continue! The drinks are thrown out to the crowd, because, well, they are thirsty too…

As I’m watching all of this unfold, I continue to look out into the crowd. The fans here are true. Die hard. Tightknit! I see people with arms around each other. They are all smiling, and they are all screaming out every lyric of every song. Fists are pumping, and the whole place is going as crazy as the band shakes the very foundation of the venue. WHEW!!!

Recently, I’ve heard grumblings about why bands continue to do encores. The argument is that the crowd knows it’s coming, so why not just play through your set and be done with it. Personally, I’m a fan of the encore. Certainly, a show like this deserves a tiny break from the madness, and definitely needs more. A war siren is heard, and as the lights come up, drummer, and brother of frontman Joel, Ryan O’Keeffe cranks an air siren, sweat dripping from his body. He cranks some more, and he rest of the band joins him onstage. Joel yells out “You may not wake up tomorrow, so you gotta LIVE IT UP”.

I saw first-hand, the reason for this love affair. The band is at one with the crowd. They are constantly making eye contact. Lead singer Joel O’Keeffe actually points to individual fans, riles them up into mosh pits, gets the women on the shoulders of their men, throws out beers, and actually gets the crowd on their knees. The fans completely soak up the interaction between themselves and the artists. There’s no denying that there’s something special here. From the second these guys burst onto the stage, to the last final second of the final track at 2230, the energy from Airbourne was unmatched to anything I have ever seen. A shorter set of just under 90 minutes, this felt like an intense workout, and I’m not certain it could have possibly been sustained for much longer. I looked out into the crowd to see their beer and sweat soaked following. The Opera House in Toronto is not a huge venue. The upper balcony was unopened to the public on this night and I couldn’t help but think “Why aren’t these guys bigger than they are?” Some of the fans I spoke to earlier in the evening foresaw the events of the evening, and advised me of what was to come. I can only say that they were completely accurate, which only means that this bands kicks ass every night they play.

SETLIST
Ready to Rock
Too Much, Too Young, Too Fast
Girls in Black
Burnout the Nitro
Boneshaker
Back in the Game
Breakin’ Outta Hell
It’s All for Rock ‘n’ Roll
Heartbreaker
Raise the Flag
Stand Up for Rock ‘n’ Roll
Live It Up
Runnin’ Wild