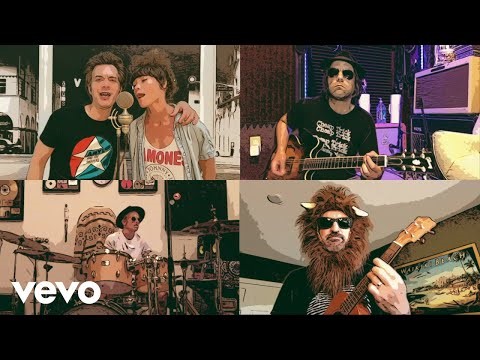 Preparations for the release of an upcoming EP may have been halted by the coronavirus pandemic, however Los Angeles-based alternative rock band SONS OF SILVER readied their creativity for the changing times. Peter Argyropoulos (vocals, guitar), Brina Kabler (keys, vocals), Kevin Haaland (lead guitar), Adam Kury (bass) and Dave Krusen (drums) wrote, recorded and filmed track “Quarantined in California” from their homes throughout Southern California.

“It’s one of those classic stories of a song that pops into your head in the middle of the night,” Peter Argyropoulos says. “I made a quick recording on my phone, sent it to the band and, the next thing I know, everyone’s recording their parts at home. Dave tracked his drums and sent them to Adam. Adam tracked his bass and sent everything to Kevin. Kevin did the guitars and sent all the tracks back to Brina and I. We did the vocals and mixed it and that was that. To be honest, I wasn’t sure we’d even release it, but Kevin’s guitars gave what was otherwise a campfire song, some Social Distortion-like edge. The video was frosting on the cake because we had no plan other than ‘have fun with it’ and, because of that, it genuinely captures each of our personalities. Shot on our iPhones, one take for each of us. The edit is raw because it suits the approach and the times. And no, the part where I push Brina away when I sing ‘social distance long at last’ wasn’t planned, but she did a good job of playing along.”