Vienna, VA – Not to long ago it seemed like much of society found itself wandering about on the dark side of the moon with no hope of finding the bright side. As time went on, many accepted the darkness, appearing to give up hope of ever beholding the light again. On August 5, 2021, at Wolf Trap National Park in Vienna, VA, Lindsey Stirling brought a message of hope and a glimpse of the light to several thousand fans, hungry to once again experience the glow.

It was a performance engineered to NASA moon landing standards with a message powerful enough to send those in attendance into orbit to meet, face to face, with the namesake of Lindsey’s newest album, Artemis, sister to Apollo (sun god) and goddess of the moon and protector of young women.

The countdown began about 7:30 when the wonderful staff at Wolf Trap rang the bell and allowed the audience to take their seats. This was by far the largest crowd I had seen since early 2020 and the energy was high. We were all anticipating a wonderful show! 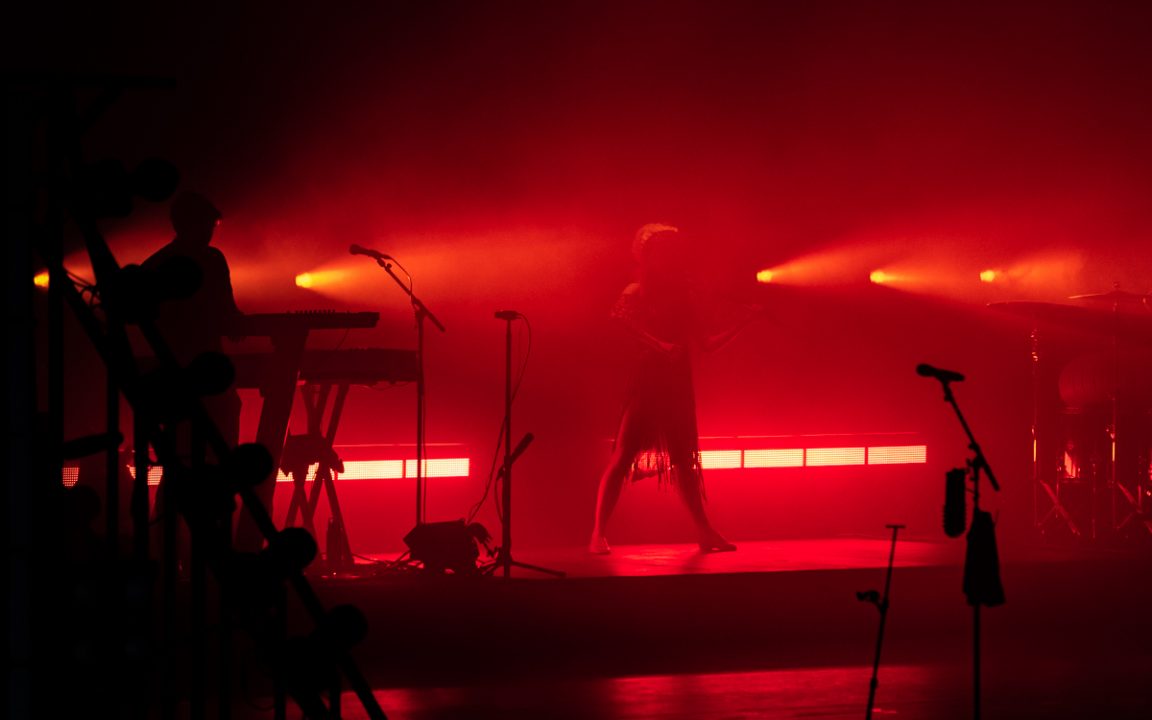 A few minutes after 8, the engines ignited. Emerging from the foggy darkness, Lindsey, with a bow like violin, introduced us to the title track of her new album, “Artemis”. Listen closely to the first few bars. The impending cosmic journey was sure to deliver a message of hope for all in attendance.

The next stop along our way was “Til the Light Goes Out” prior to landing on the “Darkside”. To me, this sequence made me feel the complexity and precision of the journey, but gave a positive vibe to being on the dark side, seeking out the light.

To prepare us for the next part of the trip, she performed “Masquerade”, the song behind her most recent video release. Lindsey and her dancers, Addie Byers, Kailyn Rogers, Taylor Gagliano, and Jessica Richens were obviously having fun with a piece with a whimsical feel. We got a feel for the bond between Lindsey and her crew. The direction the show took after confirmed that bond.

Up until this point, the majority of the performance had no words, focused on the emotional feel of her music. From cosmic to mythical and with a hint of whim, the thousands in attendance were having the time of their lives… and we had not yet completed the mission to the bright side. After “Masquerade”, the delivery of the message began.

Donning a pirate costume that would make any cosplayer jealous (complete with parrot), Lindsey told us of her childhood fantasy of being a dancer and musician who did both on a stage in front of huge audiences. Sadly, those close to her told her it would never happen and that she did not have the ability to do such a thing. With a wry smile she joked about a time in her life when she was too naïve to realize that her dreams in life were “impossible”. The audience erupted. Her message was clear, NOT knowing the dream was impossible made her work very hard to make the dreams become reality. It was the hard work that made the dream reality.

Of course, that was a reason for the pirate dress. Again, as a child, she loved being a pirate. She shared many stories of her pursuit of piratedom, including an embarrassing story about being an attendee at a pirate-themed party… with no pirates!

No show would be complete without audience participation and what better way to do this was to help her create a new story! Two topics appeared on the screen, ‘sweeping the deck’ or ‘picking Lindsey’s pocket’ and we were asked to choose. I do not want to be a spoiler for future shows, but in a nutshell, a good time was had by all… and a few lucky fans even received some merch as a result. The story took two more turns based on audience choice and all were to her famous pirate themed song, “Master of Tides”.

As the night progressed we were introduced to Artemis herself, as we learned she was the light within the moon. There is always doubt within but it is important to fight to reclaim the light, even when surrounded by darkness. Again, in a mythical way, delivering a very strong message to all, and the energy told me that all were feeling the message in their hearts. She asked the question, why as adults do we so often forget it is ok to make wishes and have dreams?

Notes and words were not the only amazing parts of the experience. So much thought went into the performance, including the awesome choreography and execution of the dance. Since this was a show that would ultimately take us to the moon, we were treated to Lindsey playing upside down as well as sitting on high, with antlers playing a lullaby to the moon in “Between Twilight“… we gazed in awe as the moon drifted off to sleep. Once asleep, she was seen “Sleepwalking“.

There is really too much to write about. It was a 2 hour escapade that took us from a National Park in northern Virginia, to the dark side of the moon. We met a goddess who gave us the light, put her to sleep, and returned… changed forever. In her shows, Lindsey tells wonderful tales through her music and words. The message is always clear. Be yourself, work hard, NEVER be afraid to dream, and accept others. Her timing could not be better, it is a message many need to hear!

Going into the last part of her performance, Lindsey came out wearing the red haired costume similar to that in “Undergroud” and finished the main show with “Don’t Let This Feeling Fade“, “First Light“, and “Mirage“. Whether you watch her videos or attend a concert, the thought behind the message in each is obvious. Every note, every dance move, every beam of light has meaning. As I said in my first review of Lindsey back in 2019, the heart in her performance is obvious. I did not think it was possible to outdo that show. On this night, Lindsey proved me wrong, to the joy of the largest post-COVID audience at Wolf Trap.

The encore for the night was “Guardian“, which was an appropriate end to the show. For nearly two hours Lindsey had delivered a show making all of us forget the darkness, bringing us into the light. As I left the venue, I talked briefly with one of the National Park staff who asked me, “What did you think of the show?” I told him how great the show was. He looked and told me that this was by far the loudest and largest crowd he had seen in a while, “She must have put on quite a show!”… Yeah, she did!