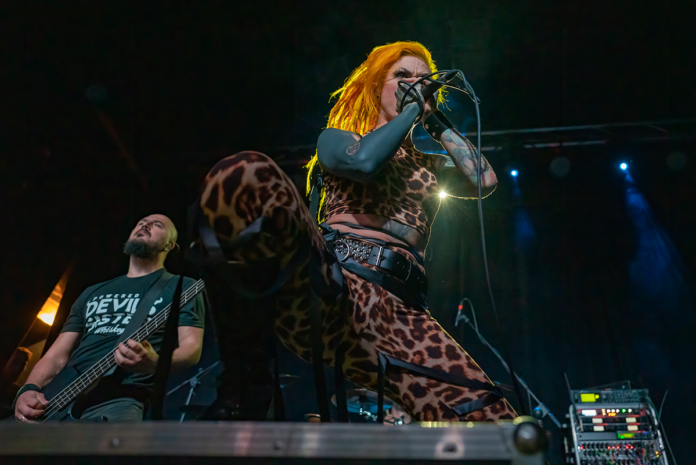 Denver, CO– The Roxy Theater in the historic Five Points district of Denver always host killer acts. Friday was no different. The lineup for that evening drew people from all over the state. Not only were there Denver local bands such as Condemned To Burn and Blood Of Lilith, but well known bands such as Mother Of Exile and Son In April were there.

To kick the evening off, Condemned To Burn started the set with “Stoned to Death“, “Dark Fantasies“, and “K.O.F.“. Condemned to Burn is a local band from Denver with a sound like no other. They had the crowd riled up and wanting more. They closed their set with “The Otherside“, “Condemned To Burn“, and “You Fucked Up“.

Next up to the stage was Heartsick Heroine. A fairly new band, but not new musicians. Heartsick Heroine formed after members Hannah and Allen Maddox left their previous band in order to find passion again in music. They did not disappoint. They hit the stage and played such songs as “Burn It Down“, “Bring Me Home” and “Don’t Say Sorry“. Their set was nothing short of awesome.

Blood of Lilith came to the stage next. Another Denver local band, Lisa, Amber, and Tiffany are a perfect storm of metal music. Their sound rocks your soul. They are a part of a solid movement in Denver. They hit songs like “Shield Maiden“, “Paradise“, and “Blood of Lilith“.To say they pumped up the crowd, would be an understatement.

Up next was the one and only Mother of Exile. Now, these guys went all out. Any time you get a chance to catch this band, jump on it.  They slayed the stage with badass jams like “Burn It Down“, “You Make Me Sick“, and “The Show“. Their stage presence is awesome. Bursts of smoke, masks, and glow in the dark contacts really set the mood for this set.

Up next was Gone In April. This is a unique band for sure. With a violin, a victorian feel, and killer vocals, this band is a true pleasure to watch. On vocals was Julie Bélanger Roy, Aaron Rogers on vocals, Yanic Bercier on drums, Marc-Andre Gingras thrashing guitars, and Steve DiGiorgio on bass.  This band hit highs and lows like a boss. The opera type feel mixed with metal leaves you breathless. They blew the crowd away with “As Hope Welcomes Death“, “Empire of Loss“, and “If You Join Me”. They were the perfect band to open for Infected Rain.

Then, it was time for Infected Rain. As the band came on stage, the crowd went nuts. Lena Scissorhands came out in a leopard print body suit and proceeded to blow the roof off the venue. They started the set off with “Pendulum“, “Mold“, and “Black Gold“. Sergey Babich and Vadim “Vidick” Ozhog with their vicious guitars, Vladimir Babici on Bass, and Eugen Voluta on drums, absolutely know how to melt faces. The tempo was fierce from the start and the band refused to let up. They rolled right into “The Realm of Chaos“, “Postmortem Pt. 1“, and “Passerby“. The bands energy was infectious. They ended the show with “Orphan Soul”, “Fool the Gravity”, and “Sweet, Sweet Lies”. This is a tour that you don’t want to miss. Check the dates and grab tickets to a show.