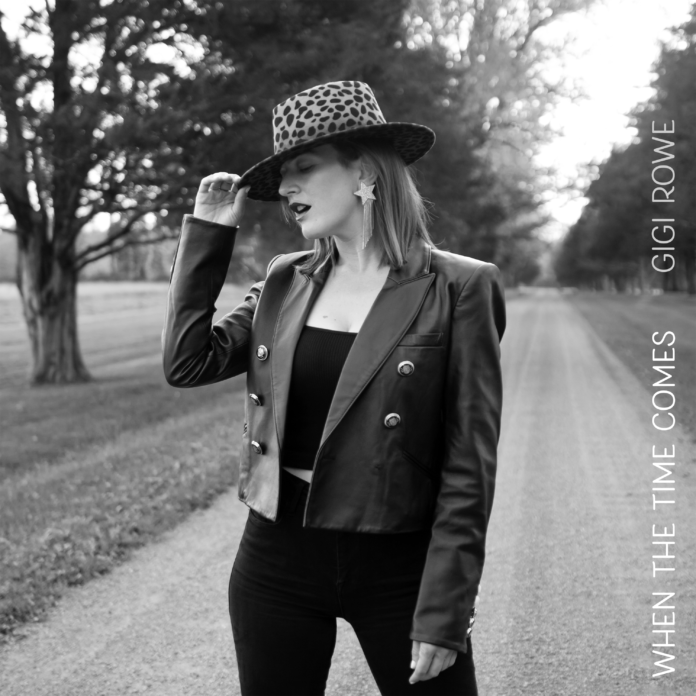 Many artists dream of having their songs in Amazon Prime Videos, dancing games and being called ‘fantastically talented’ by Jay-Z: This dream has come true for Gigi Rowe, a multi-faceted New Jersey singer and songwriter who puts life and spirit into her guitar-led pop-rock music. “With Gigi Rowe you’re cast into a forcefield of reality and imagination at the same time.” Formerly signed to LA Reid’s Island Def Jam, Gigi is a spirited songstress who finds power in her New Jersey roots. What’s more, Gigi was the first recipient of the ‘Songwriter Hall of Fame’s Buddy Holly Prize’. Gigi Rowe is a multi-talented singer and songwriter who puts a smile on everyone’s face. From a kid’s book to songs in Netflix shows to a song on Just Dance, Gigi has done it all with style. The ‘Glamorous Runaway’ is set to release her new album Laura on September 30th, with five singles already released and “When The Time Comes” out today, fans are in for a real treat with this 12-song album co-written and produced by PJ Bianco. From the first to last note you are transported into a mystical, calm world of beautiful music. “So Iconic” has been produced fantastically by the talented Viv Parker, who has landed countless songs on large TV shows. Studio time has not finished just yet, as Gigi and Claybaby have hit it off numerous times with some more hits on the horizon. Gigi sculpts her world into a musical masterpiece pulling deep intimate stories from her past and arranging them to a beautiful melody.

It was a joy to speak to Gigi and learn more about her and the world she has created around herself. You can catch Gigi live at her first official live show for Breaking Sound on September 3 at The Peppermint Club in West Hollywood. Digital Beat Magazine: How would you describe your music to someone who’s never heard it?
Gigi Rowe: I love the idea that my music can keep you company in many different kinds of moods and moments. My songs can pull you into a dream world where you’re floating above the clouds in the sunshine or swimming with the stars. And I hope for a few fleeting seconds, time stands still.

DBM: Your debut album, Laura, is set to come out in late September. Could you tell us a bit about what fans can expect from it?
GR: With this album I’m peeling back the layers to share more of my story of the girl behind the sparkly, larger-than-life persona of Gigi Rowe. It’s refreshing for me to be able to share songs that reflect where I started with music, as a singer-songwriter named Laura from New Jersey.

DBM: With everything from this album being more personal, how are you feeling with the release date coming up so soon?
GR: It means a lot for me to release songs that feel timeless and special, and that I created with one of my favorite collaborators, PJ Bianco. The music is personal and feels like an authentic narrative of my story so far.

DBM: How did you come up with your persona of Gigi Rowe? What inspired you to create her persona in the way that you have?
GR: I envisioned Gigi Rowe as a ‘glamorous runaway’, a romanticized version of my own reality floating between cities. I pictured her in a draping trench coat, platinum wig and oversized sunglasses. I saw her as being untethered and impossibly fabulous, writing her own rules and leaving behind a beautiful mess in her wake. Over time, I’ve played with this vision and Gigi Rowe has come to represent whatever I need her to be in the moment.

DBM: You keep talking about a lot of things being an inspiration, is there anything or anyone who specifically inspired you to be creative?
GR: I’ve always been drawn to iconic, larger-than-life performers. I felt really connected to Cyndi Lauper and Cher when I saw them in concert. I love how unique and unapologetic they are in how they present themselves to the world. I can relate to them as strong women, and as colorful characters and visionaries whose creativity is boundless.

DBM: You mentioned earlier that you’ve had two songs appearing on major streaming platforms this summer. Netflix’s Boo, Bitch included your song “You Me and the Stars” and the same track also landed on Amazon’s Prime Video show, The One That Got Away, as well as the tune “Borrowed Time”. How did these opportunities come around?
GR: I have a great team in LA, Koze Music, who really believes in me and my music. They pitched my songs for those opportunities. It was very exciting that my songs were chosen for those coveted spots in scenes that felt impactful to the stories.

DBM: What’s your creative process like with writing music? Is there anything unusual that generally happens?
GR: I love that it’s always a little different, there’s no set process. I think being open in the moment is the way that you wind up chasing magic. The more open you are to where you’re at, and genuinely connecting with your collaborators, that gives you the best chance at creating something special. Basically, you’re always just trying to channel something.

DBM: So not only are you a very talented musician, but you’ve also written a children’s book called Gigi Rowe Wishes, what led you down the path of writing a children’s book?
GR: I always wanted to write a children’s book. The books I loved when I was growing up, like Madeline and Eloise, had a big impression on me. I felt like the world I was creating with Gigi Rowe would lend itself well to that space. The themes that run through all of my projects are dreaming big, living authentically and following your passions. So, I figured a children’s book was a perfect opportunity to bring those ideas to life in a colorful way for a young audience, and the inner child within everyone.

DBM:  Outside of music and writing the books, do you have any hobbies?
GR: I love exploring new places and going on adventures. Scenic drives in my silver mustang with the windows down and the music loud. Coffee jaunts, and laughing over long dinners with friends. Girly sleepovers (yup, still love those!), beach hikes and boardwalks, movies on the big screen, curling up by a cozy fireplace.

DBM: Well, thank you for taking the time to speak with us today. Is there anything that you’d like to say to our readers?
GR: Dream big and believe in yourselves!

A Down to Earth Uplifting Conversation with Maggie From GFM