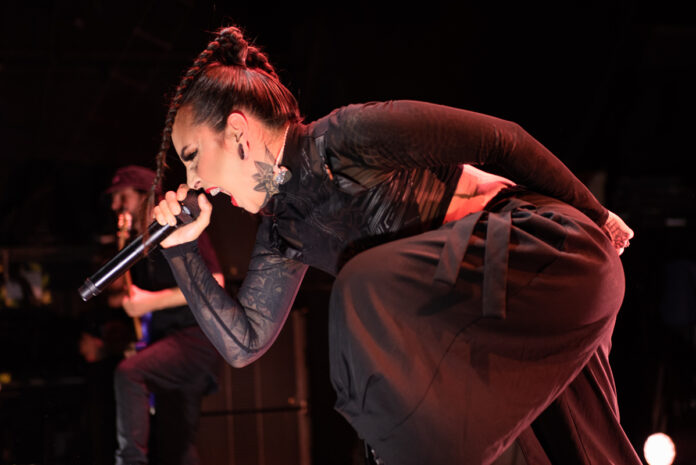 Orlando, FL – Florida sits nowhere near a fault line, but you could be forgiven for thinking otherwise when Jinjer passed through Orlando on their USA 2022 tour.

The Ukrainian rockers brought their unique brand of melodic metal to House of Blues, along with a powerhouse lineup of opening acts. Typically for reviews, I start with the headliner and work my way backwards, but this tour begs an exception.

Lowest billed was Space of Variations, also from the Ukraine. Apart from sharing a nationality and a label (Napalm Records) with Jinjer, Space of Variations brings a fresh and forward-looking interpretation of metalcore. Blending atmospheric elements with bone-crushing breakdowns, Space of Variations share a family tree with bands like Bring Me the Horizon, Wage War and LANDMVRKS.

Crowds at metal shows know they must reserve their energy, especially when there’s a long night of moshing ahead. That usually translates to lackluster pit movement early in the show. Frontman Dmytro Kozhukhar riled up the crowd anyway, even crowd surfing at one point. Space of Variations closed on a personal note about the war back home. Dmytro poignantly pleaded for everyone to love their family and friends and not overlook opportunities to express that love.

Two bands have jumped on and off this tour for the next spot, Malevolence and Vended. Orlando was treated to the former. Taking notes from bands like Hatebreed, Kublai Khan TX and even a dash of Killswitch Engage, the Sheffield, England, natives kept the pit swirling with tracks like “Keep Your Distance” and “Still Waters Run Deep.”

Outsiders to the metal scene might confuse the growled vocals and piercing riffs for genuine hostility (or, dare I say, malevolence.) But vocalist Alex Taylor only stopped smiling to sing, bounding across the stage like a big friendly kid (albeit a kid with a killer high kick).

Third billed were living legends P.O.D., who have been making music since the early 90s. Part of me wondered how a quasi nu-metal band that shares more in common with Rage Against the Machine would mesh with the beatdown and metalcore crowd. The answer: unrelenting energy and pure showmanship.

Sonny Sandoval whipped around a fluorescent orange mic cord like a weapon, dreadlocks flying in between verses of both classics and newer tracks. Standout songs “Boom” and “Youth of the Nation” hailed from earlier in their career. They also debuted an unreleased track called “Drop” that was absolutely killer. “Southtown” was what I was waiting for, and Sonny did an excellent job building up and teasing the drop from bridge to final breakdown (with some extra screaming help from Alex Taylor).

Having never seen Jinjer before, I halfway wondered if the powerful opening acts would actually overshadow the headliner. Ha! Nope. The blast beats of “Sit Stay Roll Over” immediately set the tone for the next hour.  Tatiana Shmayluk is one of the best metal vocalist in the game, easily switching between gutturals and false chords to create sonic chaos. Exhibit A was “Who’s Gonna Be the One.”

Her clean vocals, though, deserve as much recognition. It’s in those moments of tranquility (think “Perennial”) that Tatiana took her time to perch on the edge of the stage and engage with fans. Those moments are what will last in fans’ minds long after the roar of the amplifiers fade.

While Tatiana commands your attention (it’s hard to ignore headbanging that spins three braids like helicopter blades), the musicianship of the band also deserve recognition. Drummer Vladislav Ulasevish, guitarist Roman Ibramkhalilov and bassist Eugene Abdukhanov drive the music forward with the expertise that comes from more than a decade of touring and recording. They easily navigate songs that quickly switch tempo like like “Judgement (& Punishment)” and ooze talent on songs like closer “On the Top.”