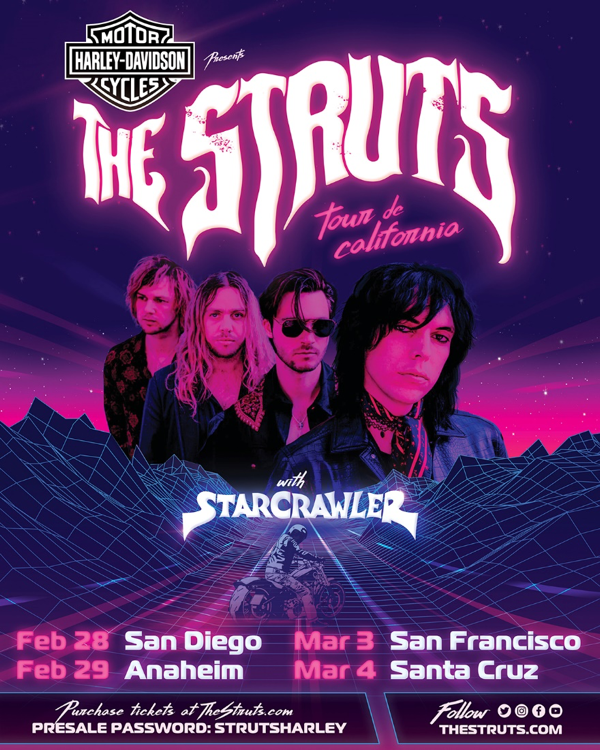 Harley-Davidson motorcycles exemplify freedom for many people; freedom on the road and freedom in life in general. It is a natural pairing then that the iconic and legendary company would partner with rock band The Struts on their upcoming Tour De California, starting February 28th in San Diego, CA.

The band itself identifies with this sense of freedom, which is apparent in their albums and live shows. Lead vocalist Luke Spiller explains the partnership as follows: “Harley-Davidson, like The Struts, represent freedom. Freedom to ride, make your own path, and be yourself. With its roots deeply embedded in classic style, The Struts share the qualities of Harley-Davidson as a means of expression and individuality.”

Harley-Davidson echoes this sentiment.  “Harley-Davidson and rock and roll have been synonymous throughout history and with The Struts we will continue the ensemble,” said Jon Bekefy, general manager of brand marketing at Harley-Davidson. “Tour de California will amplify the shared emotional euphoria that is music and riding.”

Formed in Derby, England in 2012, The Struts have worked with several rock and roll legends, opening for Foo Fighters, The Rolling Stones, The Who, and Guns N’ Roses. They were also hand-picked by Mötley Crüe to serve as the supporting act. In an interview with UK’s Radio X, the front man for Foo Fighters, Dave Grohl, even called The Struts the “best opening band we’ve ever had.”

Given this history, the relationship with Harley-Davidson seems natural. In 2019, The Struts’ hit song “Body Talks” was featured in Harley-Davidson’s global ad campaign for LiveWire™, the company’s first all-electric motorcycle. In addition, Harley-Davidson sponsored the band’s 2019 New York City show, where Spiller rode a Harley-Davidson motorcycle onto the stage.  A miniseries documenting the experience gives fans additional insight into how Spiller prepared and trained to ride onto stage in front of thousands.

This addition to a Struts’ show has just added to their reputation of being on the list of bands to see live. Indeed, Spiller, Adam Slack (lead guitarist), Jed Elliot (bass), and Gethin Davies (drums) give a unique experience. From Spiller’s sequined outfits to how the quartet engages their fans’ participation in every song, the band have a command over their ever-growing audiences that is unusual.

Digital Beat Magazine had a recent opportunity to talk with Luke Spiller about the band’s upcoming Tour De California and what fans have to look forward to in 2020.

Digital Beat Magazine:  We watched the miniseries about the Harley-Davidson event in New York, and it sounds like you’ve had a love of motorcycles since you were young. What would you like to share about this partnership extending from New York to California?

Luke Spiller: Firstly, it was something that I’ve always had an interest in. But in all honesty, I didn’t explore that avenue up until that point [the New York event]. And, it came about really, well where basically I had this idea of riding a bike out on stage, and then that little idea turned into 9 weeks’ worth of prepping and training and everything (laughs). It was fantastic, as soon as I started getting training on the bike I was hooked.  I was like “wow” why haven’t I done this before? It’s fantastic; there’s no other feeling like it.  After the show I was given a motorcycle, and funny enough since I have been here in Nashville, there is a dealership and I picked out the motorcycle I want. It’s a 2020 Softail deluxe, and honestly spent quite a lot of money getting on a lot of customization, and once it’s done, I will be getting it shipped to LA. I can’t wait- it’s going to be fantastic.

DBM:  Will we get to see a Harley on stage at any of the shows here in California?  Or is that a surprise?

Spiller:  (laughs) It just depends on when I get the bike. If I can get it before the Tour De California, I would really love some time to ride around my neighborhood and get used to it, as every single bike is different. We’ll see, we will have to see what the fire department says about me riding it on stage. (laughs)

DBM:  Well, I am sure the audience would love it if it can happen. Speaking of the audience, one of the songs from the album [Young and Dangerous] that was featured in the partnership with Harley-Davidson is “Body Talks,” which your audiences really respond to. Besides that song, is there one particular song that you enjoy playing live and why is that such a great song to perform live for the audience?

Spiller: It really depends. Personally, I really enjoy a track from Young and Dangerous called “Fire (Part 1).” Which sort of gets played round about the first quarter of the set and so I’ve still got plenty of oxygen in my lungs and I can usually really nail it, which is always great. And, when we do it live as well, I have a few moments where I jump onto the piano and Adam [Slack] is doing his guitar solo, and in the post chorus, there is some really great call and response happening with the audience and it’s such a fast paced track. To be honest, it’s actually written about and is very “motorcycle-esque.”  There are a lot of lyrics in there which are talking about engines roaring and bleeding and blasting off the edge of the world and all this kind of shit, which is fun. When we wrote it, when I was doing the lyrics, we were in the studio with a producer, Butch Walker, who also rides bikes and he had all of these motor bikes sort of sat in the studio and I was just staring at them and started writing the lyrics. It was that kind of story or narrative that we wanted to touch on, so I would say that track.

DBM: You are really active on social media with your fans, and especially on Instagram, your fans have been noticing the hashtag “Make It Big” appearing recently. Any clues that you want to share on what that means?

Spiller: All will be revealed really soon! (laughs). I guess the only thing I can slightly allude to is that perception is reality and that I decided towards the end of 2019 that projection is something I feel very passionate about. And I think I want to use that phrase [Make It Big] as my mantra. So it’s just been something that’s been creeping up in song lyrics, and titles, and general mentality, which is why I am using it. And of course I want to tease the audience a little bit (chuckles). There’s a lot of speculation on whether that’s gonna be a single or whether it’s the name for an album, or an EP.  So, all I can say that everyone will have to wait and see, but whatever it is, it’s gonna be big.

DBM: Is there anything else you would like to let the fans know about either the upcoming shows in California or maybe what’s in store for 2020?

Spiller: One of the points I really would like to make is that not only is everyone going to be witnessing a fantastic step in the evolution of this band, and of course the live shows will be better than ever, with new material and with new music coming out this year, which I think is some of our most unique and exciting to date for a very, very long time.  I’m just so happy and thrilled that people are being patient and they have been, despite us not dropping a bunch of new tracks all of the time and I am so thankful that people keep coming to the shows and wanting to see us play. All I can say is that there are bigger and better things to come and 2020 is going to be a wonderful new era for the Struts.

DBM: Is there anything else you would like to convey that we haven’t covered today?

Spiller: We’re going to be touring a lot this year, as usual, and as is tradition (chuckles), and we’re going to be hitting a lot great festivals in the US . It’s going to be fantastic. I love festivals; I love getting up there and showing everyone how it’s done. That’s going to be really fun. New outfits (laughs), new videos, and stuff like that to follow. I would love to tell you a lot more but to be honest we’re actually in the middle of writing and recording an awful lot at the moment, so we haven’t begun rehearsals for Tour De California, I haven’t sat down with my designer and started working on new outfits.  Once the music is all said and done and then everything kinda starts to snowball after that, but we should have a lot of the music, a huge majority of it, signed and sealed by the next two to three weeks.  So it’s a really exciting time, all I can say is I’m super excited and I can’t wait for everyone to hear what we’ve been up to.  It’s going to be a fantastic year for us, I can already tell.

The Struts will also be playing at the Innings Festival in Tempe, AZ on 3/1, SandJam Fest on 4/24 in Panama City Beach, FL, at the Saint Louis Music Park on June 5th and at Bonnaroo the weekend of June 14th in Manchester, TN. They also have shows set for Japan, Spain and France.

X-Raided: The Evolution of a Legend

“Finally Free” – George Chase, Jr. of The Sublets Opens Up About Life, Music, Magic and Happiness