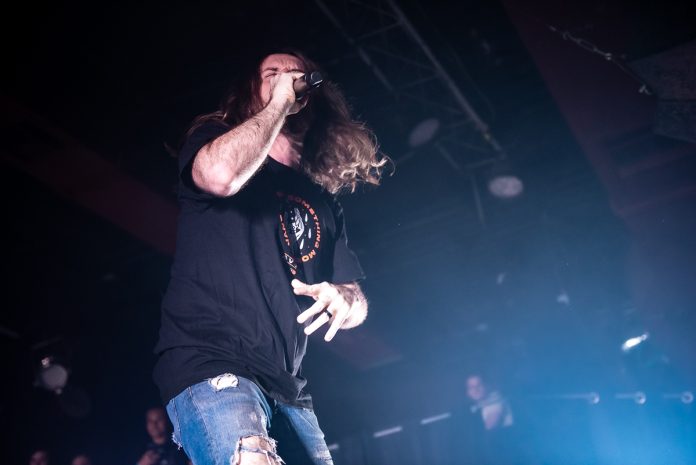 Tampa, FL – Just because your band has dirty guttural vocals, stuttering breakdowns and screams phrases like “all I know is violence”, it doesn’t mean you can’t crowd surf on an inflatable unicorn.

Fit For A King proved that point and much more when they demolished Tampa’s Orpheum with a killer setlist celebrating their latest two albums. Combining 2020’s The Path and 2018’s Dark Skies, the Dark Path Tour perfectly showcases the heat the Dallas quartet brings to the metalcore scene.

The setlist pulled exclusively from these two albums, opening with “Engraved” then sliding into “Vendetta.” Lead vocalist Ryan Kirby paced the stage, trying to dodge the spinning bass of Ryan “Tuck” O’Leary. On guitar was Daniel Gailey, the architect behind blistering solos on songs like “The Price of Agony.”

Fit For A King are no strangers to the Orpheum, but this was their first headlining spot at the Ybor City venue. Kirby noted they first pounded the Orpheum’s stage way back in 2013, as the lowest-billed opening act on a tour with Attila. Their sound has grown more sophisticated and polished with time without sacrificing the edge (read: thunderous breakdowns) that have gained them thousands of devoted followers.

Their new leaning toward more anthemic songs, particularly with The Path, has benefited greatly from the addition of Gailey. The harmonies between Tuck and Gailey really shine on songs like “The Path,” “Debts of the Soul,” and “Locked (In My Head).” Meanwhile, Kirby’s vocals remain powerful enough to challenge a silverback gorilla; that 24-second uninterrupted guttural at the end of “Backbreaker” is no gimmick.

Tampa was show No. 28 for the tour, with four more stops to go until a closing hometown show. There was no lack of energy, though, with the band barreling forward like a runaway train from start to finish. O’Leary’s legendary high kicks came fast and furious, and at one point he ended up playing on top of the bar before traveling back to the stage on an inflatable unicorn buoyed by the crowd. Gailey jumped into the crowd a couple of times, and newest band member Trey Celaya (formerly of Invent Animate) propelled the music forward on his kit.

Providing support were Fit For a King’s longtime friends and tour mates, Silent Planet. Silent Planet brought some new tracks to their setlist from 2021’s Iridescent, opening with the punishing “Panopticon.” Setlist gimme and fan favorite “Panic Room” never fails to disappoint live, but it was the set closer “Trilogy” with its soaring vocals and devastating final breakdown that had the fans calling for “one more song, one more song.”

Hollow Front took the stage just before Silent Planet with a six-song set that set the pace for Fit For A King. Show opener AVOID brought high energy and a sense of fun that didn’t diminish for the next three and a half hours.

Fit For A King Setlist