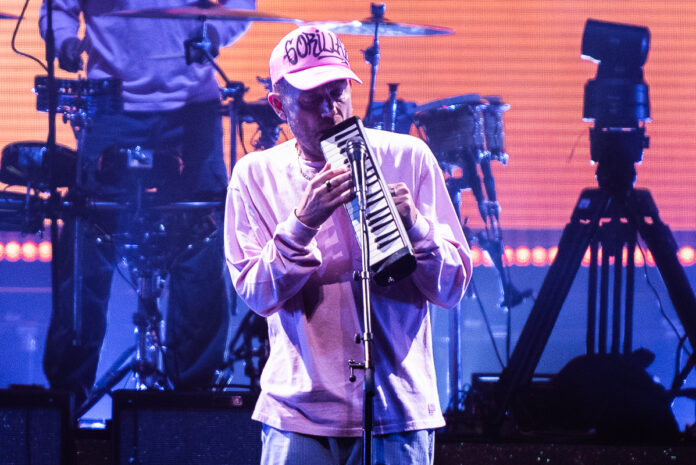 Orlando, Florida – I distinctly remember watching the animated “Clint Eastwood” music video for the first time in college and even then wondering, “How does a virtual band perform live?”

It only took 21 years to find out, but it was worth the wait.

Damon Albarn, the corporeal mastermind of Gorillaz, took the stage Friday at Orlando’s Amway Arena, along with a massive supporting cast of bandmates. Their digital personas — Russel Hobbs, Murdoc Niccals, Noodle and 2-D — remained firmly present through nonstop animations flashed on screen throughout the show.

Arena shows typically lack the intimacy of smaller venues, but Albarn bridged that gap several times with trips down to the floor to sing next to fans. A few of the slower pieces also gave Albarn a chance to showcase the vocals that first rose him to musical fame as the frontman of Blur, including the intro to “O Green World,” which segued into “Melancholy Hill.”

Thursday’s setlist mined seven studio albums and some singles from the forthcoming (February 2023) Cracker Island. Gorillaz have always defied genres, moving seamlessly from hip hop to alternative rock to worldbeat; most critics just slap postmodern on them and call it day. That shines through somewhat on albums, but it’s live that you start to realize just how seamless and timeless their sound is.

The parade of contributors and collaborators Albarn invites into the studio get the credit for keeping Gorillaz relevant, in this writer’s opinion. One of the best new singles is the catchy “Cracker Island” featuring Thundercat on bass.

While Thundercat was digitally represented, some of those original collaborators appeared on tour. Del the Funky Homosapien set the bar all the way back on the Gorillaz self-titled album when he appeared on breakout single, “Clint Eastwood,” and “Rock the House.” Both tracks were dusted off for the encore with Del the Funky Homosapien making a live appearance. Also on tour with Gorillaz was De La Soul, without whom “Feel Good Inc.”  just wouldn’t sound right.