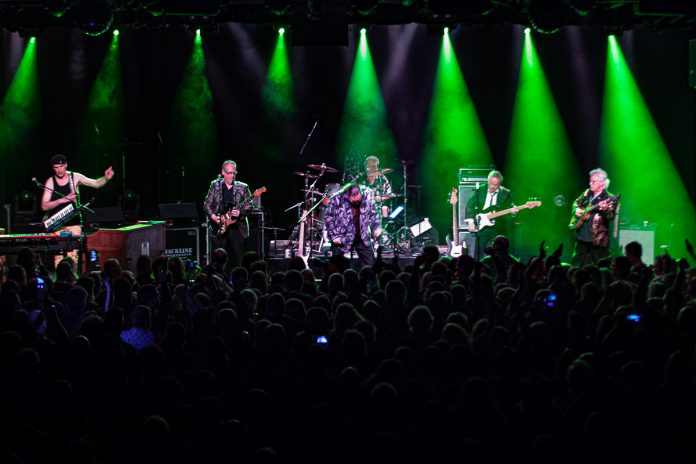 Vancouver, Canada – Legendary Canadian band, Doug and the Slugs, have embarked on a Canadian tour to celebrate their 40th anniversary.  Playing to a packed house at the famous Commodore Ballroom in Vancouver, British Columbia, Canada, the band did not disappoint whatsoever.

The line up for this tour included original members John Burton and Rick Baker on guitars, John “Wally” Watson on drums, Steve Bosley on bass, and Simon Kendall on keyboards. Doug Bennett was the front man for the band from it’s incarnation in 1977 and all the way up to 2004 before he passed away in October of that year. Stepping into the lead vocalist role is Ted Okos, not to replace or play the part of Doug, but rather pay homage to the music that Doug had written, recorded and performed for 30+ years. Ted is a Vancouver musician well known for his years with Nick Danger.

Starting their set with “To Be Laughing”, the band was on point and Okos did a phenomenal job through the night. Even working through some sciatic nerve pain from a car accident, there was no flaw in his vocal abilities. The group paid respects to Doug with a video slideshow on side screens that paid not only homage to the flamboyant frontman, but also to those who have passed that helped the bands success during their career.  As they worked through their setlist, crowd favorites were “Chinatown”, “Day by Day” and “Tomcat Prowl”.  There was much crowd participation, but non more than when they played their hits “Too Bad” and “Making it Work”.  They finished off the night with “Real Enough” before exiting the stage.  Of course the fans weren’t going to let the night end that quickly and chanted for an encore. Rick Baker made a couple of appearances to entice the crowd to get a little louder with their request before the band returned and ended the the night with the beautiful “Tropical Rainforest”.

PHOTO GALLERY Doug and the Slugs

Opening the night was the band Sharkskin, a collaboration of members from the band Odds and Simon Kendall, keyboardist from Doug and the Slugs. Rounding out the band are Craig Northey on guitar, Doug Elliott on bass and Pat Steward on drums.  According to Simon in a post on Facebook, he wrote:

“Sharkskin is 3 members of Odds (Pat Steward, Doug Elliott, Craig Northey) & Simon Kendall. The band was formed after we created the soundtrack for Kids in the Hall movie ‘Brain Candy’.
This is a rare appearance and our first gig in 10 years – in the past we opened shows for The Tragically Hip, Tower of Power (Official Tower of Power Band), Blue Rodeo & Bo Diddley among others.”

Playing a selection of instrumental tunes, the crowd was able to pickout various songs like “Green Onions” by Booker T and the MG’s. Sharkskin were entertaining and energized the crowd for the headliners.